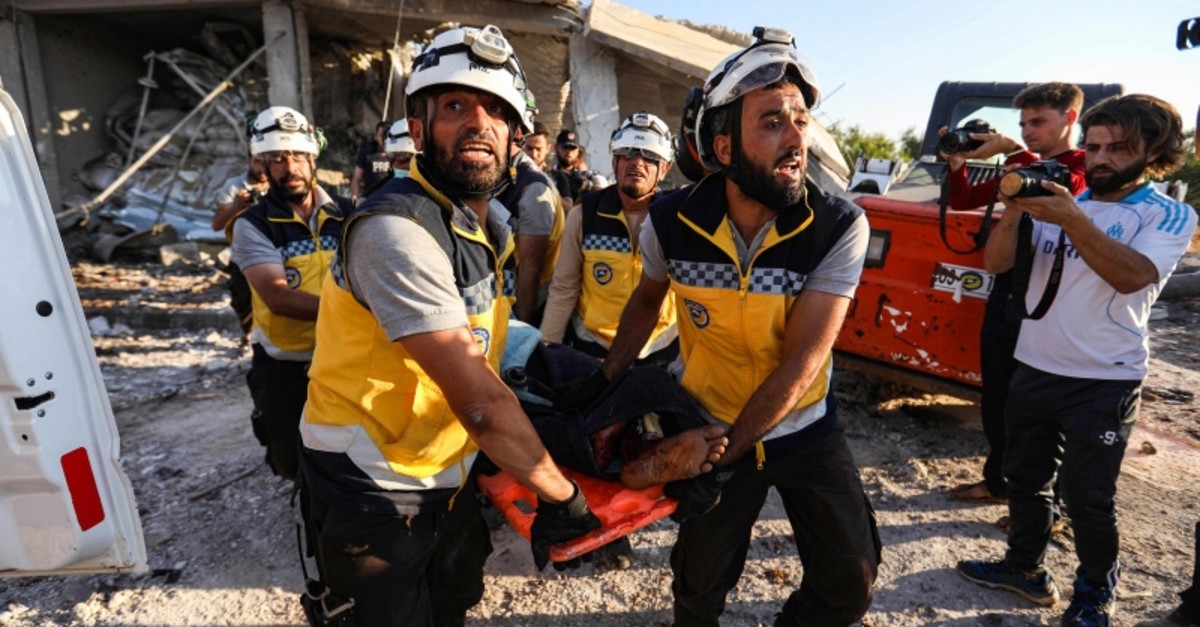 Members of ,White Helmets, carry away a body on a stretcher following a reported government air strike in the village of Benin, about 30 kilometers south of Idlib in northwestern Syria, on June 19, 2019. (AFP Photo)
by Compiled from Wire Services
Jun 19, 2019 9:23 pm

Eleven civilians were killed in regime airstrikes on a village in the Jabal al-Zawiya region of southeastern Idlib province, the Syrian Observatory for Human Rights said.

The bombardment destroyed shops and ripped apart bodies, according to an Agence Franc-Presse (AFP) photographer, who found human remains more than a 100 meters away from the site of the strike. Rescue workers were seen pulling bodies from under the rubble.

Four other civilians were killed in air raids on nearby towns and villages in southern Idlib, while one civilian died in air strikes on the edges of Idlib's eponymous provincial capital, the U.K.-based Observatory said.

Thursday morning the regime attacks caused the death of seven more civilians. Three of them were targeted at an ambulance in the region, which has been unusable following the attacks.

The latest violence comes after U.N. Secretary-General Antonio Guterres called on Tuesday for Russia and Turkey to "stabilize the situation" in Idlib.

"I am deeply concerned about the escalation of the fighting in Idlib," he told reporters, adding that "civilians are paying a horrific price."

His comments came ahead of a U.N. Security Council session on the situation.

The world is facing "a humanitarian disaster unfolding before our eyes," Mark Lowcock, the U.N. humanitarian chief, told the council.

Parts of Aleppo, Hama and Idlib are supposed to be protected from a massive regime offensive by a buffer zone deal that Russia and Turkey signed in September.

Lowcock told the U.N. Security Council Tuesday that "a humanitarian disaster" is unfolding in Syria's Idlib, noting that estimated 330,000 people have been forced to flee their homes and more than 230 civilians have died since Bashar Assad regime troops began pushing into Idlib on April 30.

Meanwhile, Russian President Vladimir Putin's special envoy for Syria said Wednesday it is time for parties to the Syrian conflict to allow for a political solution to put an end to the crisis, ignoring their own responsibility in urging Syrian regime to stop the violence.

"We are ready to work together with our Lebanese friends in the context of the Astana path, and we are determined to make more efforts and coordinate with the international partners such as the U.S., Europe and regional countries," said Alexander Lavrentiev the Russian special envoy on Syria, at a news conference in Beirut following his meeting with Prime Minister Saad Hariri.

He said a political solution was essential to achieve concrete results in war-weary Syria.

"We also discussed a specific issue that concerns Lebanon, which is the refugees, and agreed to exert more joint efforts to accelerate the return of the Syrian refugees to their homeland," he said.

"Our common agreement allows us to accelerate the solution to this problem because the presence of the displaced Syrians deepens the problem," he added.

The Sochi agreement was reached in September between Ankara and Moscow, envisaging the preservation of the cease-fire in Idlib, with the withdrawal of heavy arms and radical groups from the region.

Idlib, the last opposition enclave in Syria, had a prewar population of 1.5 million which swelled to around 3 million with new refugee waves after it was designated a de-escalation zone under the Astana agreement between Turkey, Russia and Iran in May 2017 to pave the way for a permanent political solution in Syria.

The Assad regime's attacks on Idlib are also prompting fears of a new refugee wave as international organizations have warned against a looming humanitarian crisis.