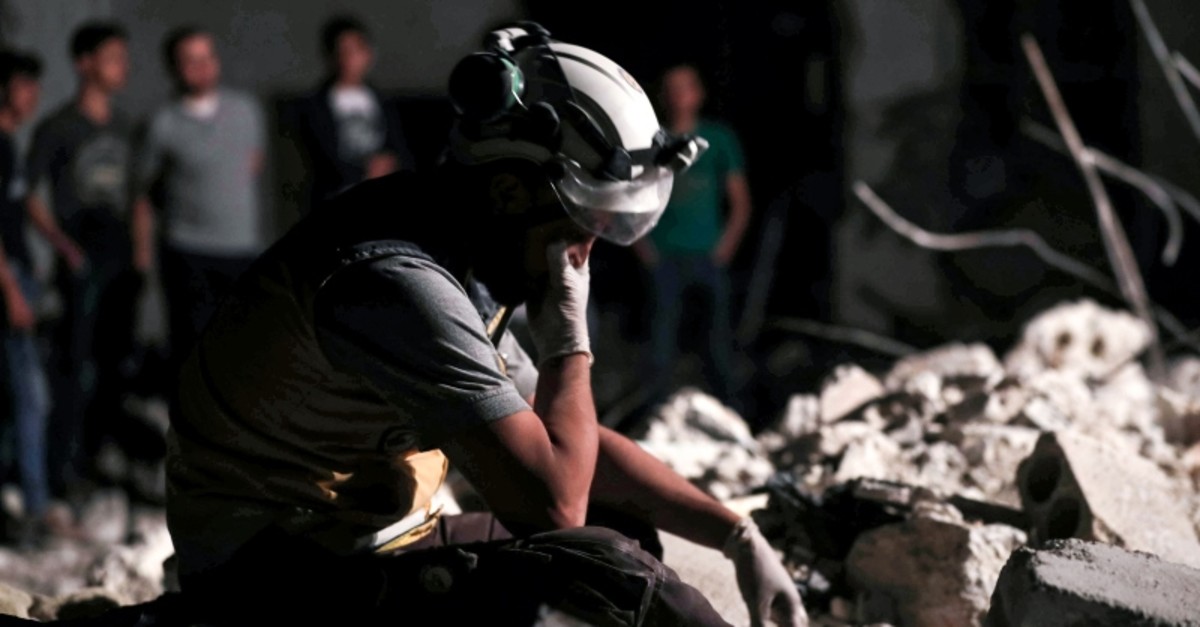 Footage obtained by Daily Sabah allegedly shows the regime dropping 18 phosphorus bombs on the town of Khan Shaykhun in southern Idlib. The attacks were reportedly launched from the nearby town of Maan.

The use of white phosphorus is forbidden under international law. Phosphorus, which poisons humans when inhaled, causes major damage to the brain and lungs and can lead to death. When used, white phosphorus creates a cloud of thick white smoke that can melt through the human flesh.

The regime has been repeatedly recorded using phosphorus against civilians and opposition fighters across Syria.

Since late April, Idlib has come under relentless bombardment by the Assad regime and its ally Russia, which so far killed nearly 500 civilians. The violence has forced around 330,000 people to flee their homes and has damaged 23 health centers, the United Nations said.

Being the opposition's last enclave, Idlib's prewar population of 1.5 million has swelled to around 3 million with new refugee waves after it was designated a "de-escalation zone" under the Astana agreement between Turkey, Russia and Iran in May 2017 to pave the way for a permanent political solution in Syria.

In parallel to relentless bombardment in Idlib, the regime continues to oppress dissent voices in its territories, arresting huge numbers of people without charges.

A report by the Syrian Network for Human Rights (SNHR) revealed that Assad's forces have arrested at least 1,478 citizens, including 71 children and 90 women, since the beginning of 2019; 764 of whom have disappeared.

According to the report released yesterday, regime forces released 325 of 1,478 arrestees after "interrogation and torture," and 1,153 remain detained. While most of the arrests occurred in the governorates of Damascus and villages and outskirts of Damascus and Aleppo, the report said that the apprehensions have been also intensified in northern Homs and southern Syria, where people were forced to settle with the Syrian regime. It added that some Syrians, who decided to return their home after being displaced, have also been arrested at border crossings.

The Syrian civil war erupted in 2011 when the Assad regime responded harshly to protesters that poured onto the streets to demand more rights and freedom. While the regime lost control of significant parts of the country in the first years of the civil war, it recently recovered swathes of territories with the backing of Russian and Iran and is now eyeing Idlib on the way to a "final victory" against the Syrian opposition.

The SNHR report said that the regime arrested at least 1.2 million Syrian citizens, who were subjected to detention without issuing an arrest warrant and without charges and forbidden to hire a lawyer and family visits, some 128,000 Syrian citizens are still being held. Some 82,000 of them have disappeared, it added, and their families have not been informed of their whereabouts.

Since the beginning of the Syrian civil war, many reports have been revealed atrocities committed by the regime against the civilian population, but no action has taken by the international community so far. One of these recent reports, which was published by the Action Group for Palestinians of Syria (AGPS) in April, said that the Assad regime killed at least 548 Palestinians by torture in Syrian prisons. It said that the Palestinians who have been tortured to death in regime-controlled prisons included women and children, adding that the fate of over 1,748 other Palestinian captives remains unknown.