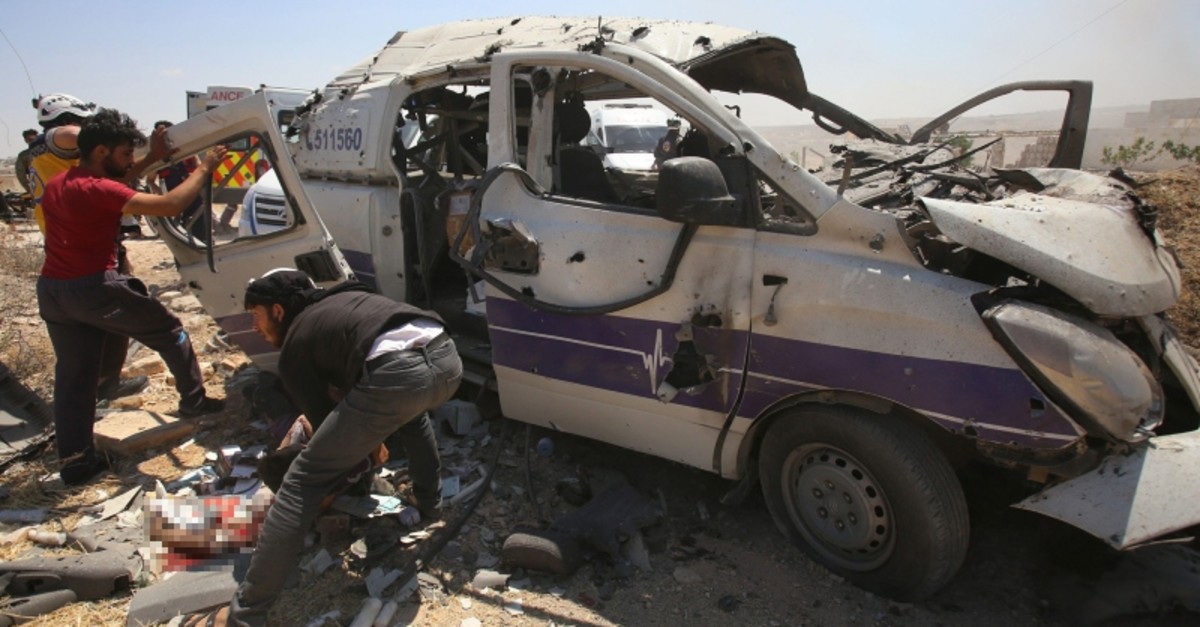 Syrian rescuers help a badly wounded man following a regime air strike which targeted an ambulance in the town of Maaret al-Numan in northwest Syria on June 20, 2019. (AFP Photo)
by Daily Sabah with AFP
Jun 26, 2019 12:15 am

The U.N. aid chief said Tuesday he had asked Russia to explain how it uses data on the location of Syrian hospitals and clinics following a string of attacks on health facilities.

Mark Lowcock, the under-secretary-general for humanitarian affairs, told the Security Council he was "not sure" hospitals that share coordinates of their location under a U.N. "deconfliction" system will be protected.

More than 23 hospitals have been hit by strikes since Russia-backed Syrian forces launched an offensive in the opposition-controlled Idlib region in late April, according to the U.N.

On June 20, an ambulance transporting an injured woman in southern Idlib was hit, killing the woman and three medical workers.

"I have written to the Russian Federation to request information as to how the details provided through the deconfliction mechanism are used," Lowcock told the council.

Russia, which backs Syrian forces in their offensive in the northwest, has firmly denied that the bombing campaign has targeted hospitals in Idlib region.

Since late April, Idlib has come under relentless bombardment by the Assad regime and its ally Russia, which so far killed nearly 500 civilians. The violence has forced around 330,000 people to flee their homes and has damaged 23 health centers, the United Nations said.

Being the opposition's last enclave, Idlib's prewar population of 1.5 million has swelled to around 3 million with new refugee waves after it was designated a "de-escalation zone" under the Astana agreement between Turkey, Russia and Iran in May 2017 to pave the way for a permanent political solution in Syria.