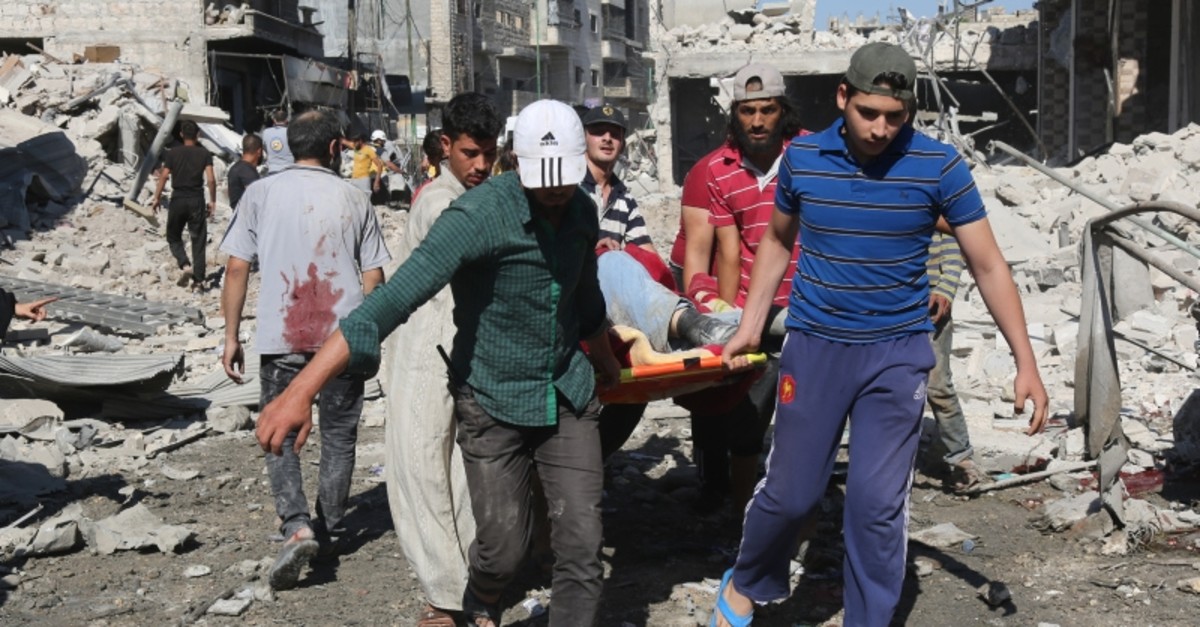 Assad regime and Russian air strikes killed Monday 50 people in the de-escalation zone in northwestern Syria, most of them in a crowded market, a war monitor said, in the latest violence to plague the region.

At least 45 other people were wounded in the air raid that hit "a wholesale vegetable market in the town of Maaret al-Numan" in Idlib province, the Syrian Observatory for Human Rights said.

The death toll could still rise as many of those wounded are in a critical condition and some people are still trapped under rubble, the Britain-based monitor said.

According to an Anadolu Agency correspondent, Russian and regime warplanes also carried out attacks on the town of Bidama and the villages of Talmenes and Al-Kabina.

The Russian Defense Ministry, however, denied that its forces had targeted a marketplace, saying that Russian warplanes had not conducted any mission in the area.

"Bodies are lying on the streets. May God take revenge on (Russian President Vladimir) Putin and (Syrian regime leader Bashar Assad) for their crimes," Abdul Rahman al-Yasser, a rescuer from Idlib's civil defense team searching for bodies under the rubble, told Reuters.

He was killed in Russian air strikes in his hometown of Khan Sheikhun on Sunday, rescuers and the Syrian Observatory for Human Rights said.

Meanwhile, the U.N. called on the regime to stop its attacks on Monday. "The nightmare in Idlib is getting worse. Today saw one of the deadliest attacks on civilian areas that we have seen since the upsurge in fighting began almost three months ago," said Mark Cutts, deputy regional humanitarian coordinator for the Syria crisis.

"At least 59 civilians were killed and over 100 women, children and men were injured, many of them critically, when a succession of deadly airstrikes hit multiple locations in southern Idlib today," he added.

"There is nothing that can justify such attacks on civilians and civilian infrastructure. Such attacks must stop immediately," he further underlined.

The Assad regime and its Russian ally have stepped up their deadly bombardment of Idlib since late April, despite a September buffer zone deal brokered by Ankara and Moscow to protect the region of some 3 million people from a massive military assault.

The spike in violence has killed more than 650 civilians, caused tens of thousands to flee there homes, and damaged or knocked out of service two dozen health facilities.

Syria's war has killed more than 370,000 people and displaced millions since it started in 2011 with a brutal crackdown on anti-regime protests.