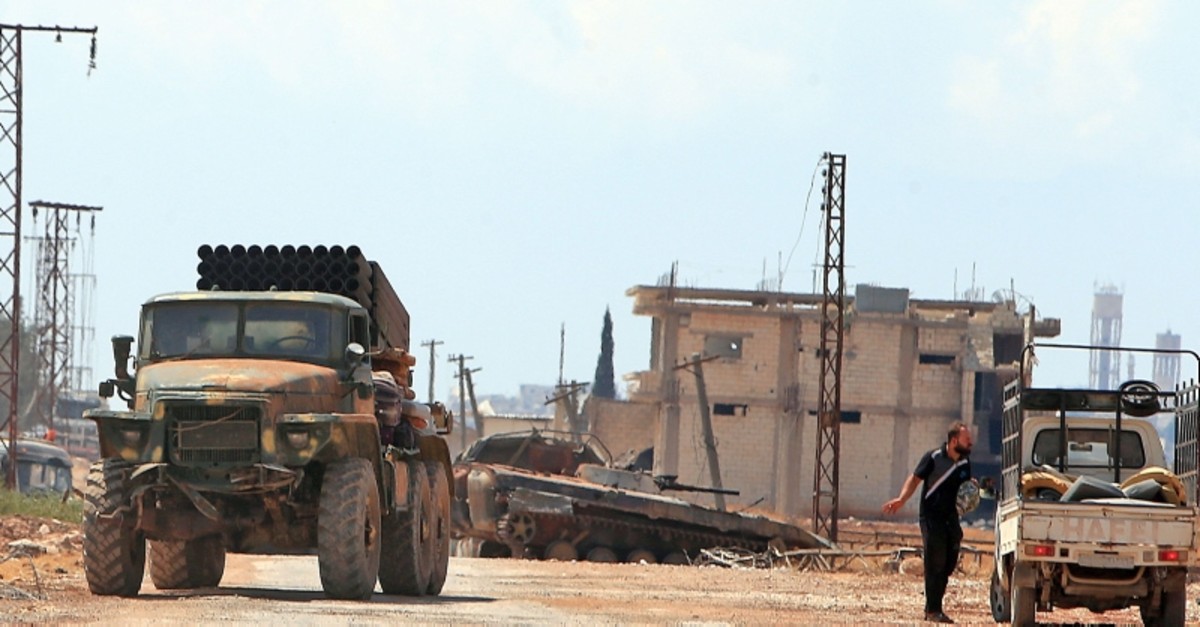 Syrian regime forces gather near the town of Khan Sheikhoun in the southern countryside of the opposition-held Idlib province on Aug. 18, 2019. (AFP Photo)
by Compiled from Wire Services Aug 20, 2019 10:05 am

Opposition groups partially withdrew from Khan Sheikhoun town in southern Idlib province and from their last remaining territory in neighboring Hama province after regime troops advances in the area, the Syrian Observatory for Human Rights and local activists said Tuesday.

Syrian regime forces advanced into Khan Sheikhoun on Monday. The town had been in opposition hands since 2014. The opposition's territorial foothold in neighboring Hama province dates back to the earliest days of the eight-year-long conflict.

Russian-backed Syrian regime advances around Khan Sheihkoun had threatened to encircle opposition fighters in their last remaining territory in northern Hama, including the towns of Latamneh and Kafr Zeita.

The Observatory said Syrian opposition fighters who had stayed behind in that area had gathered at a Turkish observation point in the town of Morek, in the territory abandoned by the opposition.

A statement on Tuesday from the main al-Qaida-linked faction in Syria, Hayat Tahrir al-Sham (HTS), said its move Tuesday was "a redeployment" and that its fighters withdrew to the southern part of the town of Khan Sheikhoun from where they would continue to defend their territory.

The U.S. called on the Syrian regime and its allied forces Monday to immediately halt all hostilities in northwestern Syria's Idlib province after an airstrike on a Turkish convoy killed three civilians and injured 12 others.

"The Assad regime and its allies must return to the ceasefire in #Idlib now," State Department spokeswoman Morgan Ortagus said on Twitter.

"Today's reckless airstrike on a Turkish convoy follows ongoing vicious attacks against civilians, humanitarian workers, and infrastructure. We condemn this violence and it must end."

Earlier Monday, a troop transfer to Idlib was initiated by the Turkish military to ensure the safety of an observation post, to keep supply routes open and prevent civilian casualties in the region, according to Turkey's Defense Ministry.

The ministry strongly condemned the airstrike, saying it "violates existing agreements, cooperation and dialogue with Russia."

The Syrian regime and its allies, however, have consistently broken the terms of the ceasefire, launching frequent attacks inside the area.

Khan Sheikhoun was targeted in sarin gas attack in 2017 that prompted U.S. missile strikes against Syria.

An investigation conducted by the United Nations and the Organisation for the Prohibition of Chemical Weapons said the Syrian regime was responsible for releasing sarin on the town on April 4, 2017. Damascus denies using such weapons.

The U.S.-based Union of Medical Care and Relief Organizations (UOSSM), which supports medical facilities in the northwest, says more than 730 civilians had been killed by regime or Russian forces since late April.

The U.N. Office for the Coordination of Humanitarian Affairs has said more than 500 civilians have died in hostilities.