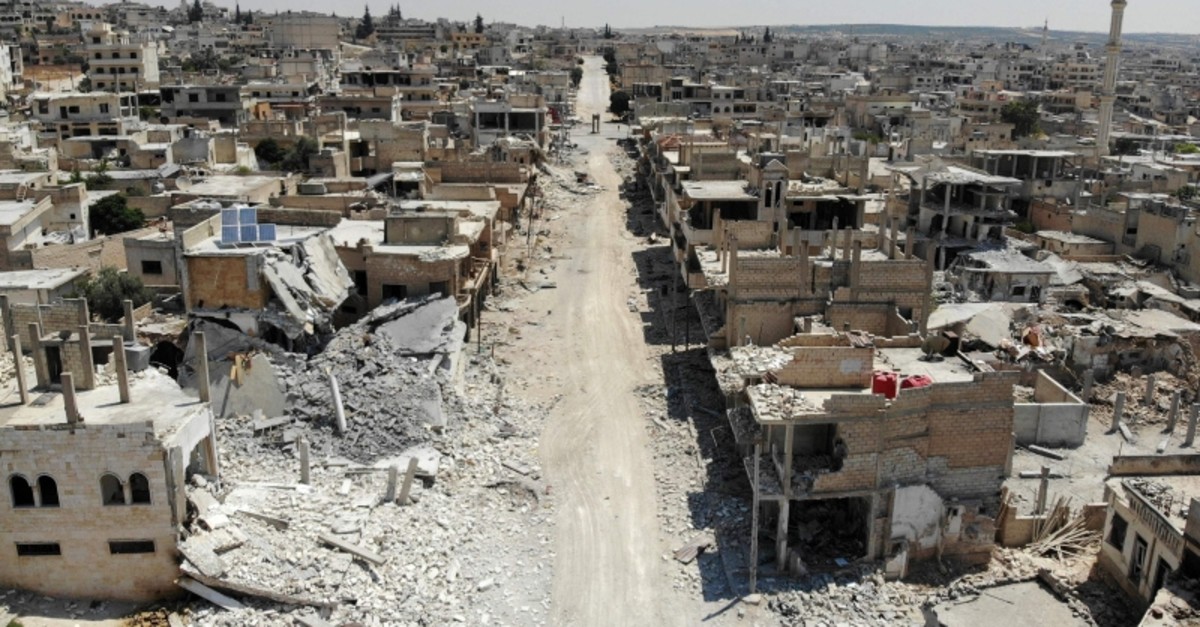 This file aerial view taken on August 3, 2019, shows destroyed buildings in the town of Khan Sheikhun in the southern countryside of the northwestern Idlib province. (AFP Photo)
by Daily Sabah with Wires Aug 21, 2019 7:48 pm

Syrian regime forces advanced into Khan Sheikhoun with the help of Russian airstrikes on Monday. The town had been in opposition hands since 2014. The opposition's territorial foothold in neighboring Hama province dates back to the earliest days of the eight-year-long conflict.

A Turkish military convoy that crossed into Syria on Monday to mobilize toward the observation point in Morek city were targeted by regime airstrikes, killing three civilians and injuring 12 others.

"The regime needs to not play with fire. We will do whatever it takes to ensure the security of our soldiers and observation posts," Çavuşoğlu said.

Presidential Spokesperson Ibrahim Kalın on Wednesday repeated Ankara's warning to the regime, calling on Damascus to end violations to the Idlib agreement.

Speaking to reporters after a cabinet meeting, Kalın said it was "out of question" to close or relocate the Turkish observation post located in Morek.

Khan Sheikhoun was targeted in a sarin gas attack in 2017 that prompted U.S. missile strikes against Syria.

An investigation conducted by the United Nations and the Organization for the Prohibition of Chemical Weapons said the Syrian regime was responsible for releasing sarin on the town on April 4, 2017. Damascus denies using such weapons.

The U.S.-based Union of Medical Care and Relief Organizations (UOSSM), which supports medical facilities in the northwest, says more than 730 civilians had been killed by regime or Russian forces since late April.

The U.N. Office for the Coordination of Humanitarian Affairs has said more than 500 civilians have died in hostilities.