4 people, including woman and child killed in Assad regime strikes in Syria 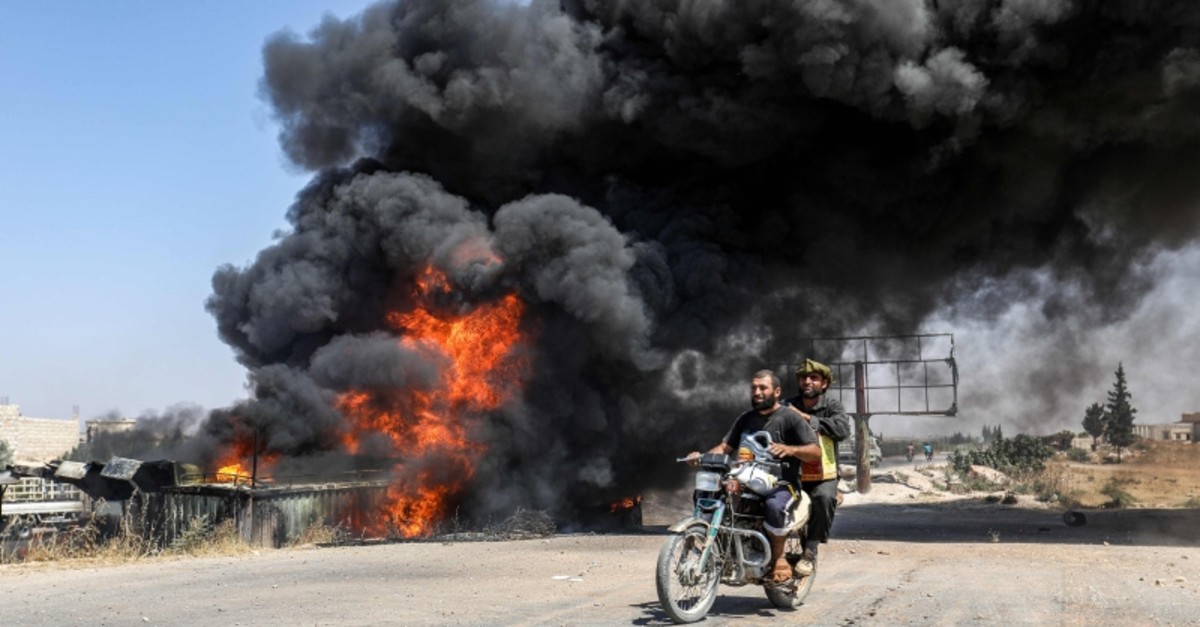 Men ride a motorcycle past a plume of smoke from a blaze at a vehicle gathering point for civilians fleeing from the south of Idlib province, which was hit by reported government forces' bombardment (AFP Photo)
by Associated Press Aug 26, 2019 3:36 pm

Airstrikes targeted Syria's last major opposition stronghold in the northwestern province of Idlib on Monday, killing at least four people, including a woman and her child, opposition activists sad.

The attacks come as the Assad regime forces turn their focus on another opposition-held town in Idlib, Maaret al-Numan, following gains they made last week.

The troops have been on the offensive since April 30, and have also captured all opposition-held areas in the adjoining Hama province, as well as the town of Khan Sheikhoun in Idlib. From the town, they are now pushing north.

The opposition's Syrian Civil Defense rescue group, also known as White Helmets, said the airstrikes and artillery shelling targeted the village of in Basqala and nearby places. Three people died in Basqala and the fourth, a man, in another village close by, Maaret Harmeh.

The Britain-based Syrian Observatory for Human Rights gave a higher toll, saying the airstrikes killed six people in Idlib, including three in the village of Basqala on the southern edge of the province. Among the three killed in Basqala were a woman and her child, it said. The differences between the Observatory's death toll and that of the White Helmets could not immediately be reconciled.

Maaret al-Numan, like Khan Sheikhoun sits on the highway linking Damascus with the northern city of Aleppo, Syria's largest. Regime forces are trying to eventually open that highway.

The months of fighting have also displaced more than half a million toward northern parts of Idlib, already home to some 3 million people.