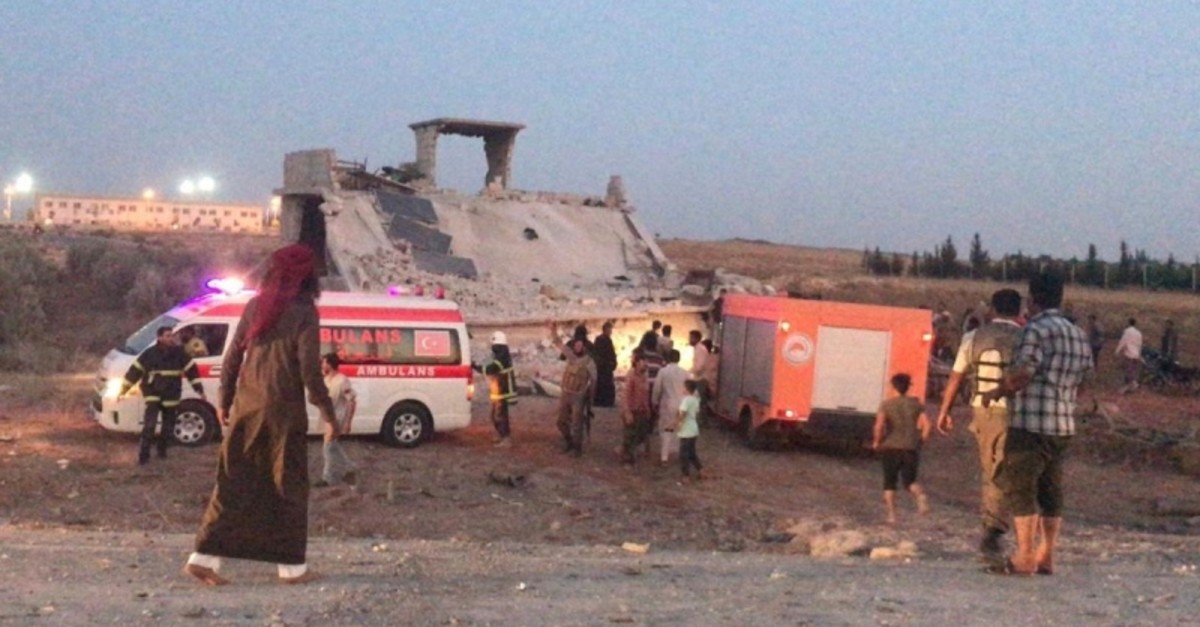 At least 12 civilians were killed and many were left heavily injured on Sunday in a car bombing outside a hospital near the Turkish border in the town of Al-Rai (Çobanbey) in Syria's northern Aleppo province.

A bomb-laden vehicle exploded in a parking lot near the hospital in the south of the town, which is within the area where Operation Euphrates Shield was conducted.

The attack took place inside the Syrian borders across Turkey's southern Kilis province, just 10 kilometers away from Elbeyli district. Civil defense teams rushed to the scene of the attack following the incident and immediately started search and rescue activities amid the debris of collapsed buildings near the hospital.

The hospital sustained heavy material damage and officials fear that the number of deaths could rise. The deputy head of the town council, Alaa al-Hammad, said the truck appeared to have been detonated remotely.

"Terrorism has no nationality; its target is humanity as a whole. As Turkey, we will decisively continue our fight against terrorism both within our borders and across them," Vice President Fuat Oktay wrote on Twitter after the attack.

To clear the terrorists out of al-Rai and the nearby town of Azaz, Turkish troops and the Free Syrian Army launched Operation Euphrates Shield in 2016 against the Daesh terrorist group and the PKK terrorist group's Syrian affiliate People's Protection Units (YPG) in northern Syria.

In June, another car bomb killed 19 people near a bustling market and mosque in Azaz.

Turkish troops and Syrian opposition also cleared the northwestern enclave of Afrin to the west of al-Rai from YPG and Daesh terrorists last year in Operation Olive Branch.

Meanwhile, a high-ranking U.S. general stated that the U.S. army would not send any more soldiers for the joint patrols being conducted with Turkish forces. The general said that their aim was to reduce the number of U.S. forces in the country, Reuters reported Monday.

Since U.S. President Donald Trump gave the order to withdraw American forces completely from Syria, the issue of the number of soldiers has frequently come up.

"We're not going to increase our footprint on the ground in order to conduct those patrols," U.S. Central Command (CENTCOM) Commander Kenneth McKenzie said during a trip to Baghdad on Friday, while acknowledging that troop levels can fluctuate as forces rotate into and out of Syria.

"We're going to do patrolling with the Turks [and] we'll manage that within the current number while actively seeking opportunities to get smaller over time," he added.

However, the joint patrols have not fully satisfied the requests of Turkey, which wants the operations to expand rapidly and as far as 32 kilometers from its border to create a safe zone controlled by Turkish troops. This latest attack, however, proves Turkey's concerns regarding the region as well as the necessity of a safe zone to prevent any further attacks.