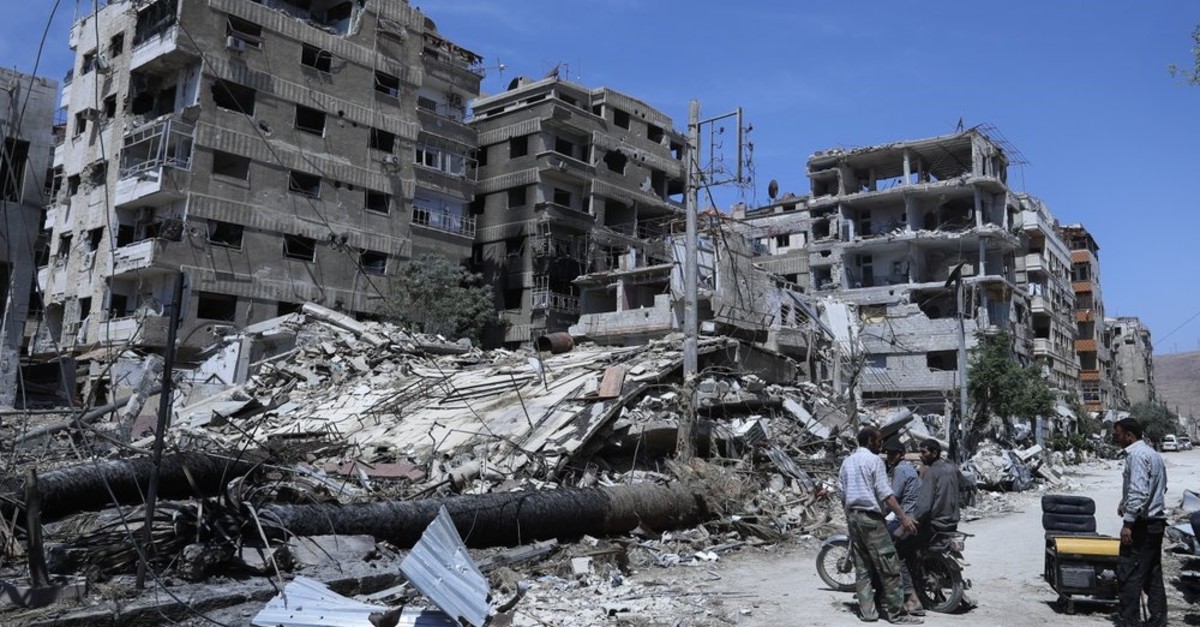 As dozens of heads of state convene for the annual U.N. General Assembly in New York this week, the lingering conflict in Syria is taking a back seat while tensions in the Persian Gulf and global trade wars take center stage.

Now in its ninth year, many Syrians fear the unresolved war has become a footnote in a long list of world crises, with weary leaders resigned to live with Bashar Assad ruling over a wrecked and divided country for the foreseeable future.

On the eve of the global gathering in New York, U.N. Secretary-General Antonio Guterres announced that a long-awaited committee that would draft a new Syrian constitution has been finalized — a step the U.N. hopes will put the war-ravaged country on track for a political solution.

But few see any real chance that the committee can make significant progress toward that end.

"The world has forgotten about us — not that anyone cared about Syria to begin with," said Hussein Ali, a 35-year-old internally displaced father of two. He now lives with his family in one rented room in the opposition-controlled northern town of Azaz, near the Turkish border. "The rise of Daesh made the West care momentarily, but not anymore," he said.

Most of Syria has returned to regime control after eight years of war. The exceptions are the opposition-held bastion of Idlib in the northwest and the oil-rich northeast, held by PKK-led Syrian Democratic Forces (SDF) with the backing of U.S. The violence has largely tapered off in most of the country, but few among the nearly 6 million refugees scattered across the globe have returned. Many fear detention if they come home — or they simply have no homes to return to.

Entire towns and villages are in ruins. The West will not contribute to reconstruction plans as long as Assad is in power and other countries are unwilling to invest without there first being a political settlement.

In Idlib, a Russia-backed regime offensive to recapture the province continues to claim lives. Hundreds have been killed and more than 400,000 displaced in the past four months under Assad and Russian airstrikes. But the bloodshed hardly makes a dent in global news.

"The world apparently has long since tired of the war, and resigned itself to frozen conflict, with a nationwide cease-fire as the best possible scenario," said Heiko Wimmen, project director for Iraq, Syria and Lebanon at International Crisis Group.

Syria's conflict was a domino effect of the so-called Arab Spring uprisings that began in late 2010, toppling dictators in Tunisia, Egypt and Libya. What started in March 2011 as largely peaceful demonstrations against the Assad family rule turned into an armed insurgency. In the chaos, terrorists such as the Daesh group flourished, seizing a third of Syria and Iraq.

Nearly half a million people have been killed and half of Syria's prewar population displaced. The opposition has been defeated for the most part. Daesh militants who dominated the news for years have been defeated, although the group continues to stage sporadic insurgent attacks.

A tentative cease-fire has been in place in Idlib since the end of August, but there is no suggestion it will be anything other than a pause before regime troops and their allies regroup and relaunch their campaign.

"The Syrian regime appears determined to clench back every last bit of territory, without the tiniest bit of compromise," Wimmen said. "As long as Damascus persists in its attitude, and is enabled by its foreign backers, the war will continue."

While the world remains deadlocked over Syria, there is no initiative on the horizon to help resolve it. The U.N.'s current Syria envoy Geir Pedersen is the fourth to hold the post after the previous three resigned following years of mediating peace talks that led nowhere.

The constitutional committee announced Monday is made up of 150 members divided equally among government, opposition and civil society members. It is tasked with drafting a new Syrian constitution in talks facilitated by the U.N. in Geneva. Desperate for a breakthrough, Guterres touted it as "the beginning of the political path out of the tragedy toward a solution."

Syria is scheduled to hold presidential elections in 2021, and the U.N. hopes the talks can help create a climate and mechanism for holding a neutral and fair vote. But with a clear military upper hand, Assad is unlikely to offer any concessions, and Syrian officials have suggested he will run again.

A Western diplomat called it an "important step" in the sense that talks overseen by the U.N. would provide some form of international scrutiny over the balloting.

"It will not be a solution for the war but rather a method to get a Syria platform going and try to be more inclusive than the two-side indirect talks," the diplomat said, referring to several rounds of talks between the government and the opposition in Geneva overseen by the U.N. envoy. The diplomat spoke on condition of anonymity to discuss sensitive issues.

While the violence may have diminished, analysts say the war is likely to continue for a long time.

At its height, the conflict unleashed a global migrant crisis that continues to reshape Europe and neighboring countries that once opened their borders to millions fleeing war. That reception has chilled over the past year.

"The world has forgotten about Aylan Kurdi too quickly," President Recep Tayyip Erdoğan said in his address at the 74th session of the U.N. General Assembly on Tuesday.

Erdoğan used his speech at the U.N. to highlight the humanitarian cost of the war by holding up a photo of Aylan Kurdi, a 3-year-old boy whose lifeless body was found on a Turkish beach in 2015 and drew the world's attention to the plight of refugees.

Erdoğan said Turkey can no longer shoulder the burden of 3.6 million refugees it hosts, urging world leaders to support the proposed plan for a safe zone to be established in Syria.

"We can ramp up the number of Syrians safely returning to their country to 3 million if the peace corridor is extended to Deir el-Zor-Raqqa line; I call on U.N. members to back Turkey's efforts to ensure security in Syria's Idlib," the president said.

An all-out Syrian government offensive to recapture Idlib, which seems inevitable, will likely have disastrous consequences, pushing hundreds of thousands of people toward the Turkish border.

"Assad won't go away, since pushing him out is no longer an option, but neither is rehabilitating him, or rebuilding the country in his presence," Wimmen said. "The status quo of misery will likely persist."