US takes 2 notorious British Daesh terrorists in Syria into custody 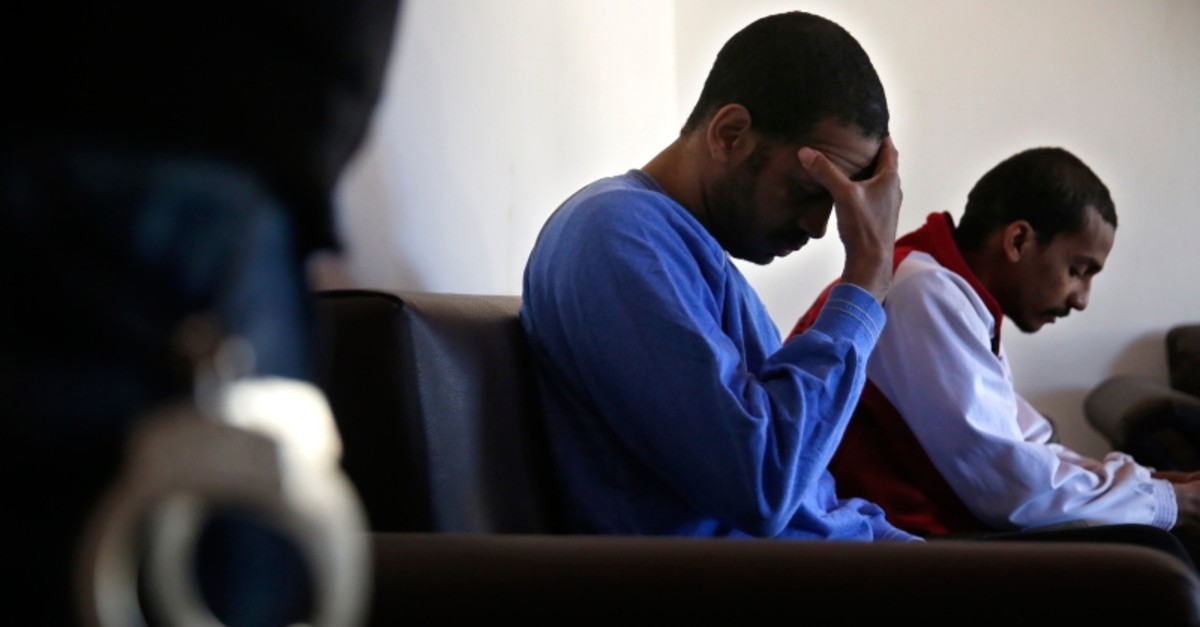 In this March 30, 2018, file, photo, Alexanda Amon Kotey, left, and El Shafee Elsheikh, who were allegedly among four British terrorists who made up a brutal Daesh cell dubbed ,The Beatles,, sit on a sofa during an interview (AP Photo)
by Associated Press Oct 10, 2019 9:30 am

Two British terrorists believed to be part of a Daesh group that beheaded hostages and was known as "The Beatles" have been moved out of a detention center in Syria and are in American custody, U.S. officials said Wednesday.

The two men, El Shafee Elsheikh and Alexanda Amon Kotey, along with other British terrorists, allegedly made up the Daesh cell nicknamed "The Beatles" by surviving captives because of their English accents. In 2014 and 2015, the militants held more than 20 Western hostages in Syria and tortured many of them. It beheaded seven American, British and Japanese journalists and aid workers and a group of Syrian soldiers, boasting of the butchery in videos released to the world.

U.S. officials said the two were taken out of Syria by U.S. military and law enforcement personnel to ensure they did not escape if security broke down as a result of the Turkish operation. So far they are the only two Daesh militants removed from Syria by the U.S., but officials say a number of others could also be moved if needed.

Another official said the two men were taken to Iraq out of an abundance of caution, adding that the United States is still fully committed to seeing them brought to justice.

The officials spoke on condition of anonymity to discuss military movements.

Turkey is carrying out an operation against the terrorist PKK-linked People's Protection Units (YPG)-dominated Syrian Defense Forces (SDF), which is now responsible for guarding thousands of detained militants.

But guarding those prisoners is now expected to be less of a priority for the YPG as they are fighting against Turkey.

Trump told reporters at the White House that some of the "most dangerous" had been moved, but he provided no details. Although just the two have been relocated so far, but thousands of other Daesh detainees remain in custody and there are no immediate concerns the YPG will completely abandon the facilities.

"We're putting them in different locations where it's secure," Trump said.

The U.S. officials said that some YPG fighters left the prisons to join the fight but did not flee in large numbers. The officials said operations against remaining members of Daesh are on hold following Operation Peace Spring by Turkey, whose national security has been threatened by the YPG terrorists on the border.

The two British men were captured in January in eastern Syria by the YPG amid the collapse of Daesh. Their detention set off a debate in the U.S. and Europe over how to prosecute their citizens who joined Daesh.

Among the journalists they killed was American James Foley, who was first, followed by fellow Americans Steven Sotloff and Peter Kassig, British aid workers David Haines and Alan Henning and Japanese journalists Haruna Yukawa and Kenji Goto. The beheadings, often carried out on camera, horrified the world soon after Daesh took over much of Iraq and Syria in 2014.

U.S. officials said American forces are not out doing patrols looking for Daesh fighters, but they said U.S. operations could restart quickly if needed.

About 30 to 50 U.S. troops were moved out of the way from two outposts in the border region. There are a number of U.S. forces in other bases just outside the so-called safe zone as well as in Manbij and other locations around the country. They have not been moved but are mainly staying in place to avoid attacks.

There are about 2,500 Daesh foreign fighters being detained in Syria, along with about 10,000 fighters from Syria and Iraq.

Trump and other U.S. officials have repeatedly pressed other nations across Europe and the Middle East to take back the detainees from their countries. But international leaders have been largely reluctant and have been slow to take any back.

Trump said other leaders told him they didn't want the detainees.

"We don't want them either," he said. "Nobody wants them but they're bad and somebody has to watch over 'em."