US forces cross into Iraq amid Syria pullout 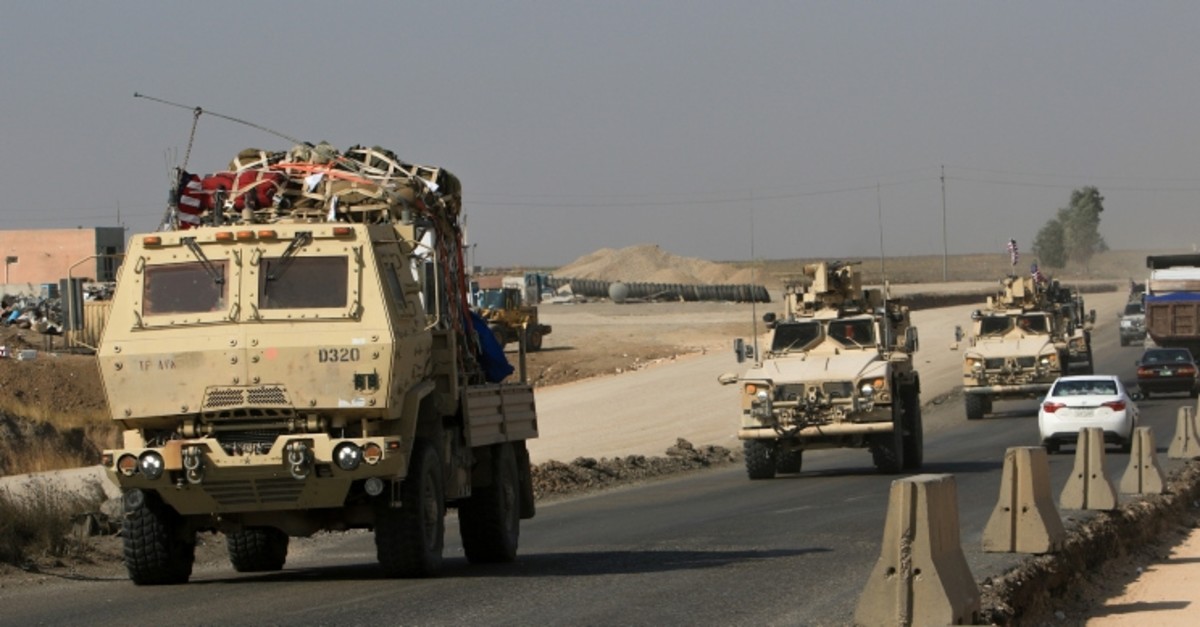 A convoy of U.S. vehicles is seen after withdrawing from northern Syria, at the Iraqi-Syrian border crossing in the outskirts of Dohuk, Iraq, Oct. 21, 2019. (Reuters Photo)
by Compiled from Wire Services Oct 21, 2019 11:16 am

United States troops have crossed into Iraq from Syria through the Sahela border crossing in the northern province of Dohuk, witnesses said Monday.

An Iraqi Kurdish security source also told Reuters that U.S. troops had crossed into the semi-autonomous Kurdistan Region of Iraq.

About 30 trailers and Hummers carrying heavier duty equipment crossed, with troops in cars coming through, the source added. A second security source in Mosul also said U.S. troops had crossed into Iraq from Sahela.

Defense Secretary Mark Esper on Monday said he was discussing an option that would keep a small residual U.S. military force in northeast Syria to secure oilfields and continue the fight against Daesh terrorists.

He said that he has not made a final decision on that option and has not yet presented it to U.S. President Donald Trump.

Speaking at a press conference in Kabul, Esper said that some American forces that are in northeast Syria have not yet started to withdraw. He said they are working to secure the oilfields in that region so the oil revenues don't fall under control of Daesh.

He said the troops around the town of Ayn al-Arab (Kobani) are withdrawing first, and troops in the northeast are still in the towns near the oil.

Earlier, Esper said that under the current plan all U.S. troops leaving Syria will go to western Iraq, and that the military will continue to conduct operations against Daesh terror group to prevent a resurgence in that country.

He did not rule out the idea that U.S. forces would conduct counterterrorism missions from Iraq into Syria. But he said those details will be worked out over time.

His comments were the first to specifically lay out where American troops will go as they leave Syria and what the counter-Daesh fight could look like. Esper said he has spoken to his Iraqi counterpart about the plan to shift the more than 700 troops leaving Syria into western Iraq.

Trump ordered the bulk of the approximately 1,000 U.S. troops in Syria to withdraw after President Recep Tayyip Erdoğan made it clear in a phone call that Turkish forces were about to launch an anti-terror operation in northern Syria.

The U.S. currently has more than 5,000 American forces in Iraq, under an agreement between the two countries. The U.S. pulled its troops out of Iraq in 2011 when combat operations there ended, but they went back in after Daesh began to take over large swaths of the country in 2014. The number of American forces in Iraq has remained small due to political sensitivities in the country, after years of what some Iraqis consider U.S. occupation during the war that began in 2003.