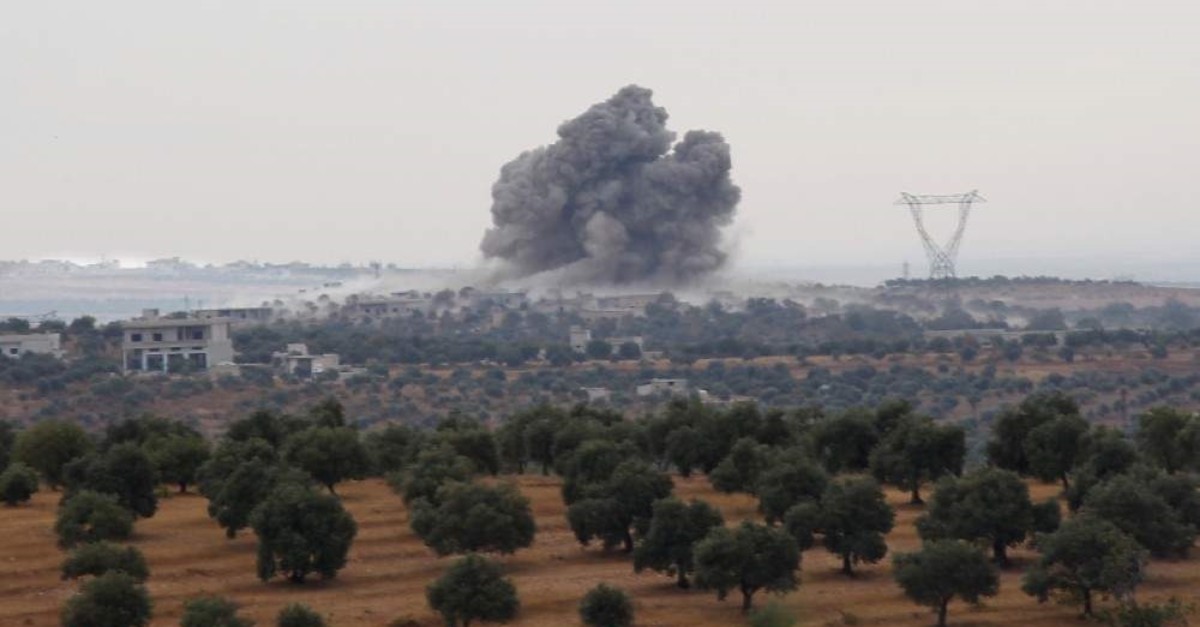 Smoke billows following a reported Russian airstrike in the south of the northwestern Syrian province of Idlib near the village of Rakya, on Oct. 24, 2019. (AFP Photo)
by Anadolu Agency Oct 25, 2019 8:51 pm
The regime attack in Syria killed two civilians and injured five others in the Idlib de-escalation zone on Friday.
The attacks carried out by the Bashar Assad regime targeted civilian settlements in Bidama district, Qafranbil town and several villages falling inside the de-escalation zone with cannons, rockets and mortars.
According to the Syrian civil defense agency White Helmets, the casualties were reported in Bidama in southwestern Idlib.
War planes — which belonged to Russia, according to Syrian opposition groups — also attacked five villages in Idlib and Latakia.
On Thursday, the Assad regime attacked a marketplace in the de-escalation zone in Idlib.
At least seven people were killed and 17 wounded during the artillery attack in al-Janudiya town.
In 2018, Turkey and Russia agreed to turn Idlib into a de-escalation zone in which acts of aggression are expressly prohibited.
The de-escalation zone is currently home to some 4 million civilians, including hundreds of thousands displaced in recent years by regime forces from throughout the war-weary country.
Syria has been locked in a vicious civil war since early 2011, when the Assad regime cracked down on pro-democracy protests with unexpected ferocity.
Since then, hundreds of thousands of people have been killed and more than 10 million others displaced, according to U.N. officials.
Last Update: Dec 20, 2019 1:15 am
RELATED TOPICS