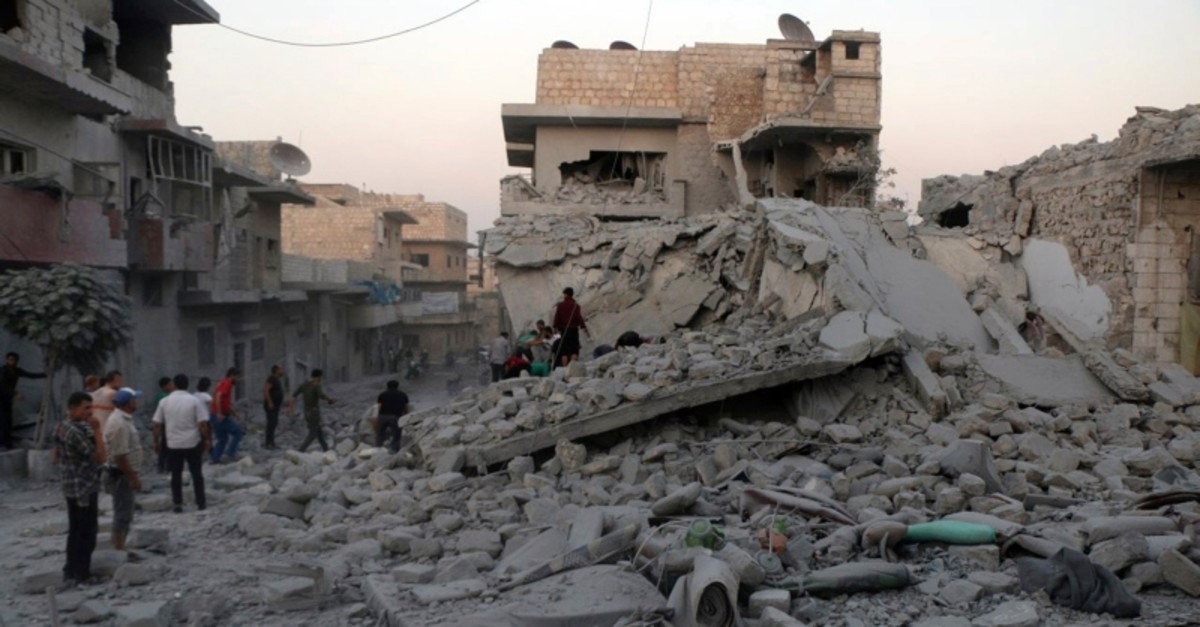 This photo released Wednesday, Aug. 28, 2019, shows people searching for victims under the rubble of destroyed buildings that was hit by airstrikes in the northern town of Maaret al-Numan, in Idlib province, Syria. (White Helmets via AP)
by Daily Sabah Oct 30, 2019 8:45 pm
Casualties caused by the administration of Syrian dictator Bashar Assad dwarfs the number of deaths and injuries caused by the leader of one of the most brutal terrorist groups in history, Abu Bakr al-Baghdadi, the Syrian Network for Human Rights revealed in a tweet late Wednesday.
According to the infographic the watchdog shared on its official Twitter account, the Assad regime caused nearly 200,000 deaths while the Daesh terrorist group killed a marginally much less 5,004 people between March 2011 when the Syrian war broke out and October 2019 when Baghdadi was killed in a U.S. raid.
While Assad's forces killed over 22,000 children, Daesh killed nearly a thousand, the SNHR found.
When it comes to the number of civilian women killed, Assad also surpassed Baghdadi, slaughtering more than 20 times more innocent people.
Although the atrocities committed by both sides are almost equally gruesome, those killed by Assad largely go unnnoticed or don't gain much media attention as Daesh's killings, getting lost in the fog of the Syrian civil war.
Syria has been locked in a vicious civil war since early 2011, when the Bashar Assad regime cracked down on pro-democracy protests with unexpected ferocity. Since then, hundreds of thousands of people have been killed and more than 10 million others displaced, according to U.N. numbers.
Last Update: Dec 20, 2019 1:20 am
RELATED TOPICS