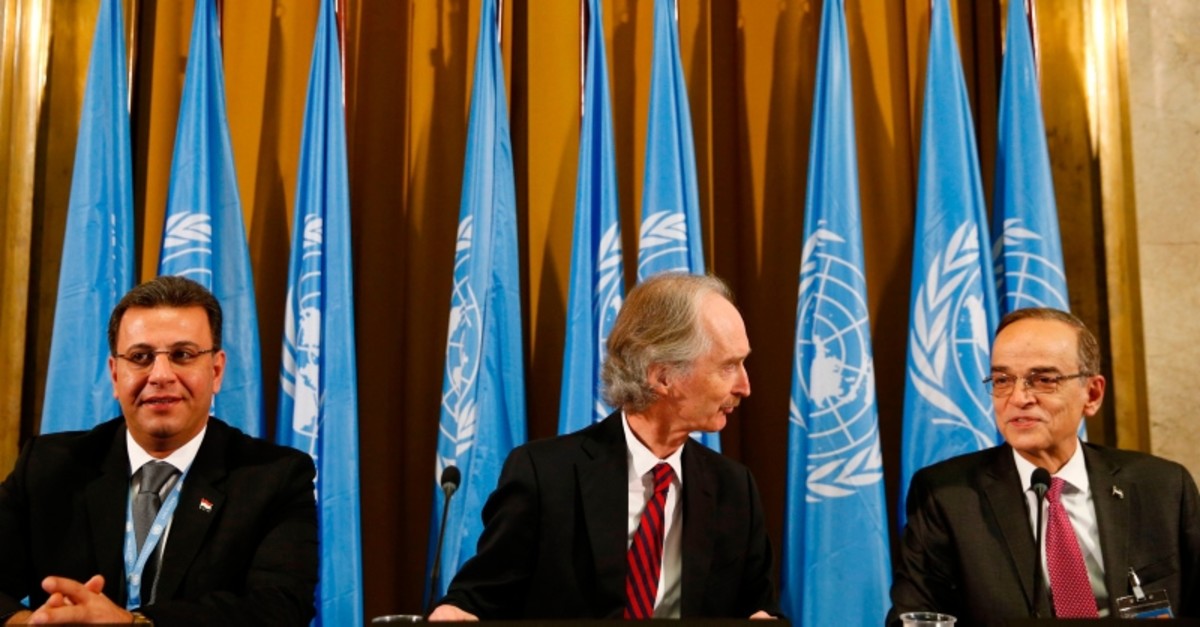 UN Special Envoy to Syria Geir Pedersen (C), co-chair Ahmad Al-Kuzbari (L) and co-chair opposition Syrian Negotiations Commission Hadi Al-Bahra attend ceremony to mark opening of a meeting of Syria constitution-writing committee (AFP Photo)
by Compiled from Wire Services Oct 30, 2019 9:38 am
The opponents in Syria's civil war are sitting down at the same table for the first time after eight and a half years of bloodshed to work on a new constitution.
At noon Wednesday, 150 delegates including 50 each from the regime of Bashar Assad, opposition and civil society will launch the U.N.-brokered talks in Geneva.
Russia and Iran, the allies of the regime, and Turkey, which backs the opposition, see the Constitutional Committee as a chance to build trust and to move towards a broader political process that could end the conflict.
"We urge the sides to reach agreement," Russian Foreign Minister Sergei Lavrov told a press conference Tuesday evening at the Swiss U.N. seat, after meeting his Turkish and Iranian counterparts, as well as U.N. Syria envoy Geir Pedersen.
While Iran's top diplomat Mohammad Javad Zarif pledged that the three guarantor powers would not intervene in the process, his Turkish counterpart Mevlüt Çavuşoğlu said he was optimistic but aware that the talks would be difficult.
The three countries will not take part in the intra-Syrian negotiations. Several previous rounds of U.N.-mediated Syria talks have yielded no outcome, as the regime and opposition failed to engage in substantive talks.
Pedersen cautioned this week that "the Constitutional Committee alone cannot and will not resolve the Syrian conflict." In addition to the talks, confidence must be built on the ground, especially by finding solutions for the thousands of prisoners of war and abductees, the Norwegian diplomat said.
Constitutional review is a central part of the U.N.-led effort to end the war in Syria, which has killed more than 370,000 people and forced millions to flee their homes since 2011.
Security Council resolution 2254, which defines the U.N. push for peace, also calls for U.N.-supervised elections in Syria.
Pedersen said the aim would be to reach consensus on all issues. Where that was not possible, changes would only be made with a 75% majority vote in the committee to avoid having any one side dictate the process.
But the prospects of consensus appears remote.
While the opposition has called for an entirely new text, Assad's Foreign Minister Walid Muallem argued that amending even one article of the current charter would amount to a "new constitution."
The regime has also insisted that the process have no deadline.