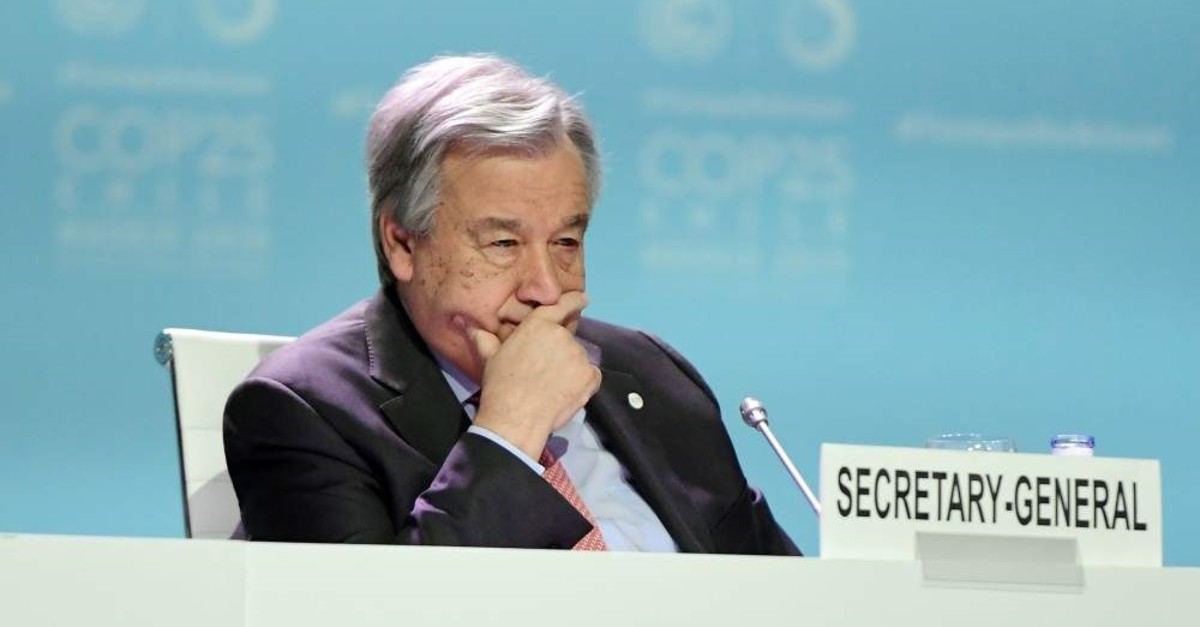 In this file photo taken on December 11, 2019 Secretary-General of the United Nations Antonio Guterres takes part in the Global Climate Action High-Level event at the UN Climate Change Conference COP25 at the 'IFEMA - Feria de Madrid' exhibition centre, in Madrid. (AFP Photo)
by Compiled from Wire Services Dec 17, 2019 9:05 am

The U.N. chief is urging the Security Council to authorize the delivery of critically needed humanitarian aid across borders and conflict lines in Syria for another year, saying this aid mainly to opposition-held areas "has staved off an even larger humanitarian crisis inside Syria.”

Secretary-General Antonio Guterres said in a report to the council circulated Monday that over 1 million people receive cross-border assistance every month.

"The United Nations does not have an alternative means of reaching people in need in the areas in which cross-border assistance is being provided,” he said.

"Humanitarian assistance provided by United Nations agencies included food for an average of 4.3 million people in need each month and more than 1.3 million health and medical treatments to people throughout the country," Guterres noted. "Cross-border assistance ... remained a vital part of the humanitarian response to the more than 11 million people in need," he added.

Security Council members are debating the renewal of the operation, whose mandate expires Jan. 10. "It is in no one's interest to block this resolution," one diplomat told AFP, asking not to be named.

Since 2014, the Security Council has sent aid through four border crossings – Bab al-Salam and Bab al-Hawa in Turkey, Al Yarubiyah in Iraq, and Al-Ramtha in Jordan.

Diplomats said the sponsors of this year’s resolution – Germany, Belgium and Kuwait – circulated a draft that was discussed last week which would add a fifth crossing at Tel Abyad in Turkey and extend cross-border operations for a year.

The diplomats, speaking on condition of anonymity because the discussions were private, said Russia and China, which are allies of Syrian regime chief Bashar Assad, didn’t engage constructively on the sponsors' draft resolution.

Instead, Russia, supported by China, circulated a rival resolution Monday that seeks to close the crossing points in Iraq and Jordan, leaving only the two in Turkey, the diplomats said. And it would renew the cross-border operation for only six months.

Russia's approach is far from the wishes expressed by Guterres in his report. To distribute humanitarian aid, crossing borders and front lines is indispensable, he said.

Last year, Russia and China abstained in the 13-0 vote authorizing the crossing points.

Russian Ambassador Vassily Nebenzia said he abstained because "the new realities in Syria" require that the program for cross-border deliveries be fine-tuned, "with the ultimate goal here being to gradually but inevitably wrap it up."

Guterres said 2019 saw "further deterioration of an already extremely difficult humanitarian situation for people throughout Syria, where over 11 million people remain in need of assistance.”

As the year draws to an end, the secretary-general said, he is "particularly concerned about the impact that a potential full-scale military offensive in the northwest could have on the already vulnerable population, while also watching with concern the impact of ongoing hostilities in the northeast, as well as increasing tension in the south.”

He said this year's humanitarian appeal for Syria for $3.3 billion is only 55% funded, at $1.8 billion, and urged donors to provide additional support.