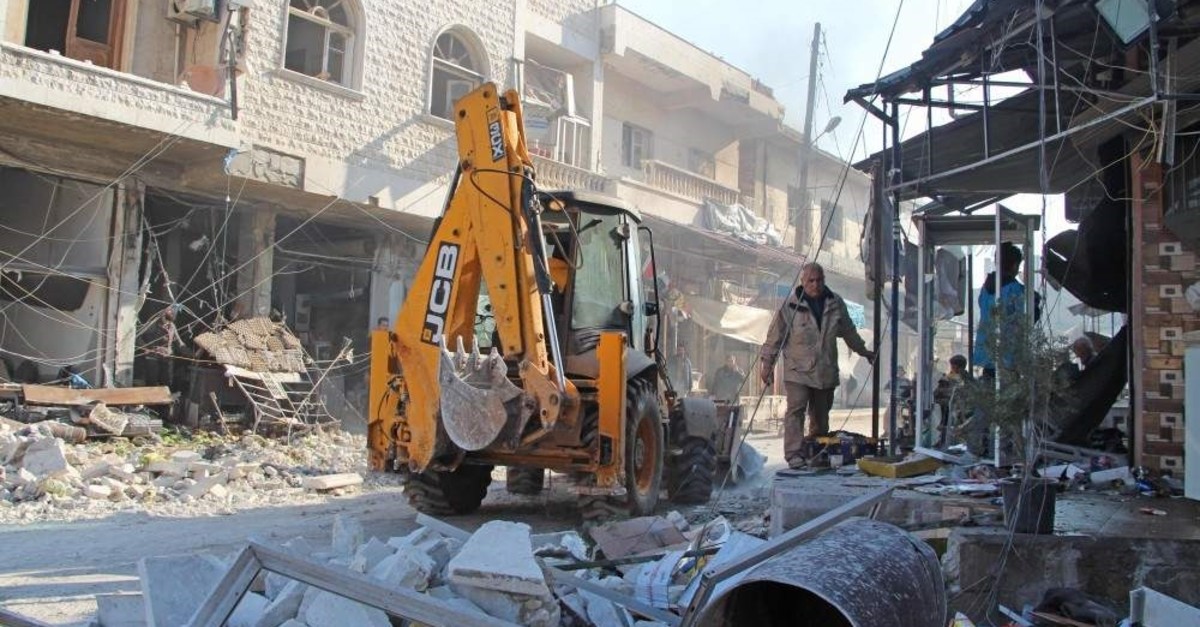 Syrian men use an excavator to clear rubble following a reported Syrian airstrike in the town of Saraqib, in the northwestern Idlib province on Dec. 21, 2019. (AFP)
by Dec 21, 2019 6:24 pm
Airstrikes by the Syrian regime and its ally Russia Saturday killed 12 civilians in the country's last major opposition bastion where a rise in violence has forced tens of thousands to flee.

The bombardments hit the northwestern province of Idlib, which has been increasingly targeted this month by Bashar Assad's forces.

The intensification of airstrikes on southern Idlib since Dec. 16 has forced tens of thousands to flee their homes, according to the United Nations.

On Saturday, bombing killed eight civilians in the town of Saraqeb, according to the Syrian Observatory for Human Rights.

Four others were killed in separate airstrikes in other towns in southern Idlib.

Thirty-six others were wounded, the Britain-based monitoring group added.

The bombardment came as violent clashes continued for a third straight day between regime loyalists and the opposition forces that dominate the province.

Battles since Thursday have killed 67 extremists and 15 moderate opposition fighters, the Observatory said.

Fifty-seven regime loyalists were also killed, bringing the total casualty count to nearly 140 on both sides, it added.

The Idlib region, which is home to some 3 million people including many displaced by Syria's civil war, is controlled by the country's former al-Qaida affiliate, Hayat Tahrir al-Sham (HTS).

The Damascus regime has repeatedly vowed to take back control of it.

Pro-regime forces launched a blistering offensive against the region in April, killing around 1,000 civilians and displacing more than 400,000 people from their homes.

Since August, the area has supposedly been protected by a cease-fire announced by Moscow, but bombardments have continued.

Syria's war has killed over 370,000 people and displaced millions since beginning in 2011 with the brutal repression of anti-regime protests.
RELATED TOPICS