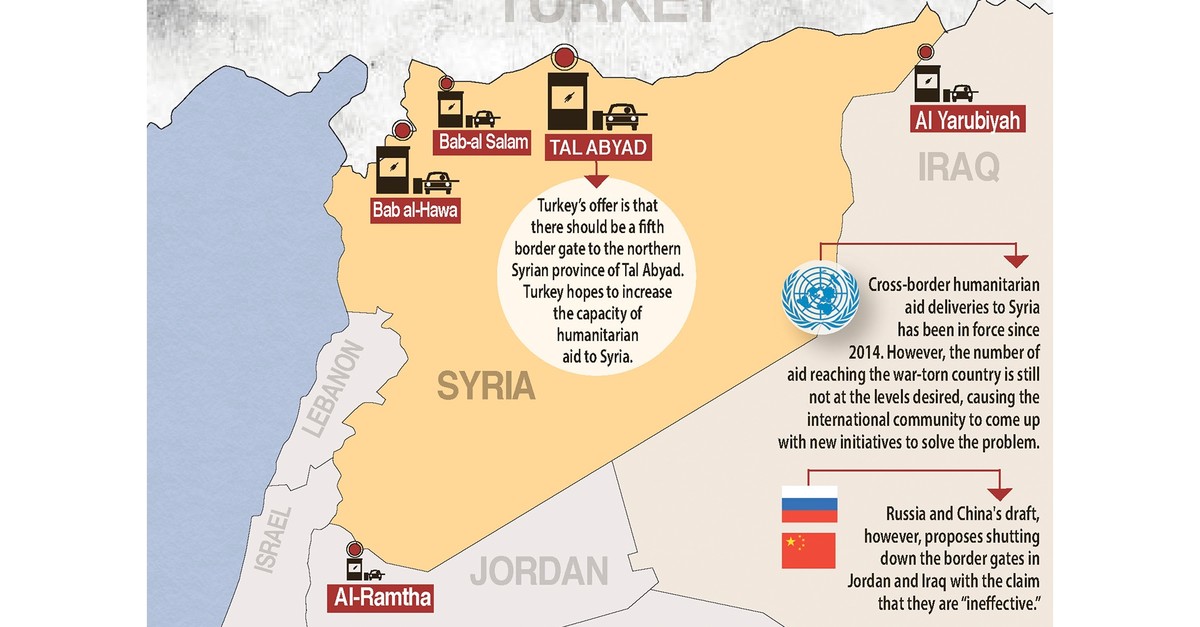 After eight years of conflict, forcible displacement and torture, Syria is one of the countries in the world in most need of humanitarian aid. Despite the efforts of many nongovernmental organizations from around the world as well as countries like Turkey, the number of aid reaching the war-torn country is still not at the levels desired, causing the international community to come up with new initiatives to solve the problem.

The latest idea making headlines is the opening of a fifth gate in southeastern Turkey for the purpose of delivering humanitarian aid, supported by not only Turkey itself but also a majority of U.N. countries. There is, however, one problem that has prevented this idea from turning into reality – the constant rejection of it by Russia and China.

The U.N. was expected to revive the decision of U.N. Security Resolution 2165 that enables cross-border humanitarian aid deliveries to Syria which has been in force since 2014 and will continue till the end of this year. Turkey has added another dimension to this by saying there should be a fifth border gate to the northern Syrian province of Tal Abyad. While Turkey hopes to increase the capacity of humanitarian aid to Syria, Russia has opposed the idea and suggested decreasing the number of border gates to just two.

This year, Germany, Belgium and Kuwait took the responsibility of being the sponsors for the U.N. aid resolution and prepared the initial draft of reviving the decision for another year as well as the idea of opening a fifth border gate. However, last week there was a counteroffer to this draft by Russia and China.

Currently, there are four border gates that lead to various points in Syria from the neighboring countries of Turkey, Iraq and Jordan. The names of the border gates are Bab al-Salam and Bab al-Hawa in Turkey, Al-Yarubiyah in Iraq, and Al-Ramtha in Jordan. Thanks to these gates, millions of people in Syria receive humanitarian aid regularly. Russia and China's draft, however, proposes shutting down the border gates in Jordan and Iraq with the claim that they are "ineffective," the two countries also propose reviving the decision for only six months instead of a full year.

Last week, the issue was discussed by the 15-member Security Council. The opposing offer divided the council, though most supported Turkey's idea, the fact that both Russia and China have veto powers crippled the talks. Ten U.N. envoys from member states underlined the importance of reviving the decision, emphasizing that if not, the results would be "disastrous."

"This is a mechanism that enables life-saving assistance to reach 4 million people in Syria," the supporting countries said.

The U.S. also became one of the main countries that welcomed Turkey's offer. The country's envoy to the U.N. Kelly Craft said in December that for the next year, the U.S. is determined to support the humanitarian aid resolution for Syria, including Turkey's idea of a fifth gate.

Still, Russia claims that the draft presented by the sponsor countries does not reflect the realities on the ground. The Russian envoy to the U.N. Vassily Nebenzia said that the draft is "unacceptable and inviable." He underlined that if such a scenario would occur, Russia would veto the decision.

Countries like the U.K. have opposed Nebenzia's remarks, saying that the need for cross-border aid did not change over the course of the years in Syria.

Karen Pierce, the U.K.'s envoy to the U.N. said that just like the U.N. itself, they would support the idea of a fifth border and emphasized that even if Turkey's offer was eventually canceled, the idea should be brought to the table at a future date.

Similarly, the German envoy to the U.N. Christoph Heusgen rejected the veto remarks and said that humanitarian necessities should be approached objectively, implying Russia and China's supportive stance toward Syria's Bashar Assad regime.

"We are not impressed by any veto threats," he said, calling on Russia to observe international humanitarian law and recognize people's suffering.

The U.N. constantly dispatches humanitarian aid trucks to Syria, the latest of which came on Tuesday with 40 truckloads of humanitarian aid dispatched to the northwestern Syrian province of Idlib. The trucks passed through the Cilvegözü border gate in southeastern Turkey, with aid to be distributed to residents in urban areas of the war-torn province as well as the surrounding countryside.

According to the U.N., the revival of the decision has critical importance. U.N. Under-Secretary-General for Humanitarian Affairs and Emergency Relief Coordinator Mark Lowcock, said previously that there is no alternative for the cross-border aid and currently, approximately 4 million people in Syria are need of this aid. He also added that the aid is delivered under the supervision of the U.N. alongside auditors from 15 states.

U.N. Secretary-General Antonio Guterres also said last week that "the United Nations does not have an alternative means of reaching people in need in the areas in which cross-border assistance is being provided." He indicated that in 2019, the conditions of people in Syria have worsened as more than 11 million people are needing assistance.

Guterres continued by saying that he is "particularly concerned about the impact that a potential full-scale military offensive in the northwest could have on the already vulnerable population, while also watching with concern the impact of ongoing hostilities in the northeast, as well as increasing tension in the south."

In the U.N.'s documentation, in 2019 the humanitarian appeal for Syria was $3.3 billion of which only 55% was funded, at $1.8 billion, showing the need for additional support.

In order for the resolution to pass, the draft needs to receive nine votes without any vetoes from Russia, China, U.S., France or Britain The expiration date for the current resolution is Jan. 10, 2020.

Similar problems occurred last year as well, once again due to disagreements by Russia and China. Yet, the disagreements were resolved with both countries abstaining from a vote.

In the last three years, Turkey has launched three operations in northern Syria to clear the area from terrorist elements and provide a safe zone for displaced Syrians to resettle. The latest operation, Operation Peace Spring, was launched on Oct. 9. to eliminate YPG terrorists from northern Syria. Tal Abyad was cleared of terrorists as part of Operation Peace Spring on Oct. 13. Since then, locals have gradually returned with humanitarian aid being provided with the help of the Turkish Armed Forces and the Turkish Red Crescent. At least 10,000 people were given food and hygiene products and hundreds of were provided checkups.

Similar processes have taken in provinces that Turkish forces have liberated, with humanitarian aid immediately following operations. For instance, Turkey has provided ambulances to bring those in need of advanced health care services in Ras al-Ayn across the border and enabled them to receive treatment at Viranşehir State Hospital in the Turkish southeastern border province of Şanlıurfa.