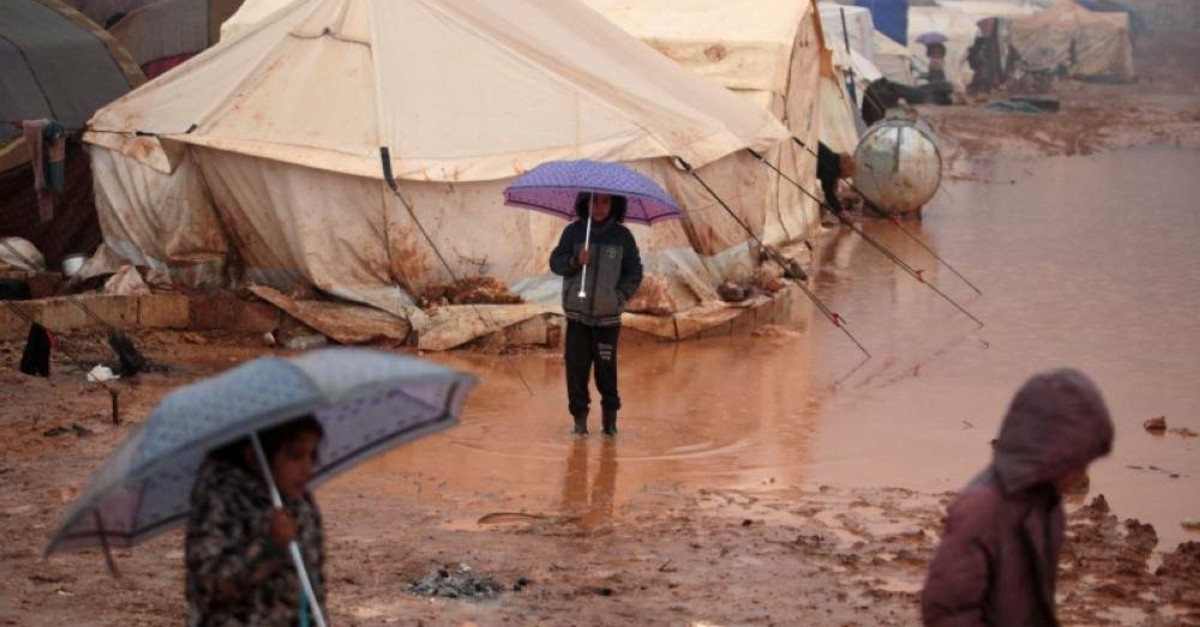 Syrian children who fled battles in the southern countryside of the Idlib province walk in mud and water caused by heavy rainfall, in a camp for displaced people in Kafr Dariyan situated at a short distance from Syria's border with Turkey, on Dec. 28, 2019 (AFP Photo)
by Anadolu Agency Dec 28, 2019 6:58 pm

Some 47,000 civilians have fled Idlib, a de-escalation zone in northwestern Syria, over the last three days, as international organizations in the field warn of much larger migration waves in the coming weeks.

According to an Anadolu Agency (AA) correspondent on the ground, the Bashar Assad regime and its allies halted their airstrikes on Idlib in recent days; however, civilians continue to flee the region for safer areas closer to the Turkish border, Mohammad Hallaj, director of Syria's Response Coordination Group, told AA.

He said if the attacks resume, a new migration flow from the Jebel ez-Zawiyah region in southern Idlib could emerge, which will raise the number of displaced in the last two months to half a million.

Another international aid group, the International Rescue Committee (IRC), said Saturday that conditions in northwest Syria's opposition-held Idlib province are at a "breaking point," warning that continued violence could displace as many as 400,000 in the coming weeks.

Rehana Zawar, the IRC's country director for northwest Syria, said the enclave is already in the midst of a major humanitarian crisis. Zawar warned that if violence escalates, 400,000 could be forced to leave their homes, pushing the number of the displaced inside Idlib to over a million. The province is home to over 3 million people.

The enclave is already home to many displaced from previous rounds of violence in the nine-year war. "Conditions in Idlib are already at a breaking point," Zawar said, calling for an immediate cease-fire.

After weeks of intense bombardment, on Dec. 20, the Assad regime and its allies launched a military campaign mainly in the cities of Maarat Al-Numan and Saraqib as well as the surrounding rural areas, capturing 35 residential areas, forcing tens of thousands to flee their homes.

The U.N. Office for the Coordination of Humanitarian Affairs said that as a result of hostilities, more than 235,000 people had been displaced between Dec. 12 and Dec. 25. Many of those fled from the town of Maaret al-Numan, toward which Syrian regime troops have been advancing since Thursday.

The airstrikes on the region halted following the Moscow visit of a Turkish delegation led by Deputy Foreign Minister Sedat Önal on Dec. 23.

Since then, more than 1,300 civilians have been killed in attacks by the regime and Russian forces in the de-escalation zone as the cease-fire continues to be violated.

Over a million Syrians have moved near the Turkish border due to the intense attacks in 2019.

According to the National Coalition for Syrian Revolutionary and Opposition Forces, the Idlib province is home to around 3 million civilians, 75% of them women and children.

Since mid-December, the fighting has killed nearly 80 civilians, according to the Syrian Observatory for Human Rights war monitor.

U.S. President Donald Trump reacted to the violence in a tweet on Thursday, saying: "Russia, Syria, and Iran are killing, or on their way to killing, thousands of innocent civilians in Idlib Province."

He added that Turkey was "working hard to stop this carnage."

Idlib's residents mainly depend on critical cross-border aid, which came under threat last week after Russia and China vetoed a U.N. Security Council resolution that would have extended such deliveries for a year.

The move raised fears that vital U.N.-funded aid could stop entering Idlib starting in January unless an alternative agreement is reached.

The Syrian regime pulled out of its last outposts in Idlib province in 2015, following fierce battles with opposition groups in the region.

The Damascus regime, which now controls 70% of Syria, has repeatedly vowed to take back the region.

Despite a cease-fire announced in August, the bombardment has continued, prompting Turkey this week to press for a fresh cease-fire deal during talks in Moscow.

France on Tuesday called for an "immediate de-escalation," warning of deteriorating humanitarian conditions.

Since the eruption of the bloody civil war in Syria in 2011, Turkey has taken in some 3.7 million Syrians who fled their country, making Turkey the world's top refugee-hosting country.

Ankara has so far spent $40 billion for the refugees, according to official figures.