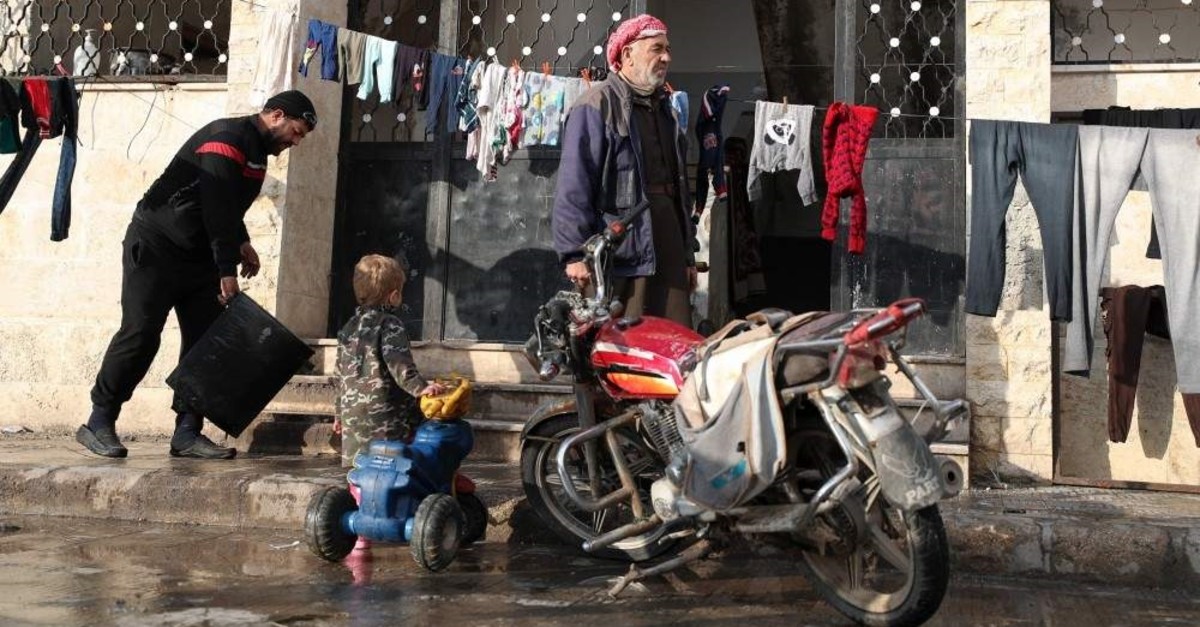 Abdul Razzak (R), a 65-year-old Syrian man displaced with his family from Maaret Al-Numa, looks on as his grandson plays at the entrance of a makeshift shelter in a former school building in Ariha town, in the south of Syria's northwestern province of Idlib, Dec. 31, 2019. (AFP PHOTO)
by Daily Sabah with Agencies
Jan 03, 2020 2:04 pm

A new refugee flow has turned up at the Turkish border amid Bashar Assad regime attacks in northern Syria’s Idlib province, as 44,000 civilians have been forcibly displaced in the last four days.

According to a report released by Syria Intervention Coordinatorship, with the addition of these 44,000 people, the number of civilians that have had to flee their hometown due to regime attacks in Idlib has surpassed 328,000 since November.

Speaking to Anadolu Agency (AA), the head of the Coordinatorship Mohamad Hallaj said that the total number that reached the Turkish border is now 328,418. If attacks escalate further, officials worry that an additional 250,000 civilians might move to the border in the upcoming period.

Due to the lack of space in the camps near the border, as well as the lack of infrastructure and the decreasing amount of humanitarian aid, the displaced civilians are struggling to find a safe place to settle.

The latest reports reveal that within the month of December alone, 253 people have been killed in Idlib, while 250 others have been injured. The local sources referred to by İhlas News Agency (İHA) stated that in December, 700 barrel bombs and 14,000 rockets were used on Idlib, while there have been 1,250 airstrikes. The attacks specifically targeted neighborhoods filled with civilians and hospitals.

On Thursday, President Recep Tayyip Erdoğan said up to 250,000 refugees were fleeing from Idlib toward Turkey, while Ankara was determined to prevent this new refugee flow from entering the country.

"Right now, 200,000 to 250,000 migrants are moving toward our borders. We are trying to prevent them with some measures, but it's not easy. It's difficult, they are humans too," Erdoğan said in a conference in Ankara.

Idlib is dominated by opposition groups and is also home to 3 million civilians. The U.N. has warned of the growing risk of a humanitarian catastrophe in the region, which lies along the Turkish border.

The Syrian regime’s continuous bombing of Idlib has led to “deep concerns,” the U.N. said Friday, launching an emergency meeting over the incident.

Releasing a statement from the U.N. Secretariat, the U.N. said it is very concerned about the news claiming bomb attacks in Idlib caused the death and injury of many women and children. Referring to the latest attacks that targeted a school, the U.N. called all parties in the war-torn country to take necessary steps to provide civilian security.

Forces belonging to the Bashar Assad regime attacked a school in Idlib’s Seraqib district on the first day of the new year, killing eight civilians, four of them children.

“On #NewYear2020 Day, regime forces commit a war crime against student children and teachers after targeting a school in the town of #Sarmin to the east of #Idlib using internationally prohibited cluster bombs this morning,” the White Helmets Civil Defense Group wrote on Twitter Wednesday.

The attack reportedly wounded 20 people, with the death toll likely to rise.

According to Agence France-Presse (AFP), some diplomats hope the session would also provide an occasion to discuss the reauthorization of cross-border U.N. humanitarian aid deliveries to millions of Syrians.

On Thursday, UNICEF Executive Director Henrietta Fore called for an "immediate cessation of hostilities in the northwest of Syria."

"We call on those fighting, especially in the northwest, and those with influence over them for the following: stop all attacks on children and services that provide for them, including health and education facilities and water systems," she said in a statement.

According to UNICEF, at least 140,000 children have been displaced in the past three weeks due to fighting in and around Idlib.

Ankara ready for any circumstances

Speaking on the issue Thursday, Interior Minister Süleyman Soylu said that Turkey is ready for any circumstances that could occur at its southern borders, as well as in Idlib.

“We are facing the movement of approximately 250,000 people. We have foreseen this before and have been watching the developments for a while. Regarding the issue, we have already taken some measures,” he said, referring to humanitarian aid and the location from which to manage the movement.

Meanwhile, Turkish humanitarian groups are also concerned with the developments in Idlib. The head of the Humanitarian Relief Foundation (İHH) called on the international community to provide aid for the displaced civilians Friday.

“There have been people who fled from the bombardment and had to stay out in the cold,” Bülent Yıldırım said during his visit to a camp built by İHH on the Turkish border for the displaced Syrians.

Underlining that the current humanitarian work is not enough to meet the needs, Yıldırım said that in order to prevent an escalating humanitarian crisis, the amount of aid to the region must increase.

After eight years of conflict, forcible displacement and torture, Syria is one of the countries in the world in most need of humanitarian aid. Despite the efforts of many nongovernmental organizations from around the world as well as countries like Turkey, the number of aid reaching the war-torn country is still not at the levels desired, causing the international community to come up with new initiatives to solve the problem.

The latest idea making headlines is the opening of a fifth gate in southeastern Turkey for the purpose of delivering humanitarian aid, supported by not only Turkey itself but also a majority of U.N. countries. There is, however, one problem that has prevented this idea from turning into reality – the constant rejection of it by Russia and China.

The U.N. was expected to revive the decision of U.N. Security Resolution 2165 that enables cross-border humanitarian aid deliveries to Syria which has been in force since 2014 and will continue till the end of 2019. Turkey has added another dimension to this by saying there should be a fifth border gate to the northern Syrian province of Tal Abyad. While Turkey hopes to increase the capacity of humanitarian aid to Syria, Russia has opposed the idea and suggested decreasing the number of border gates to just two.