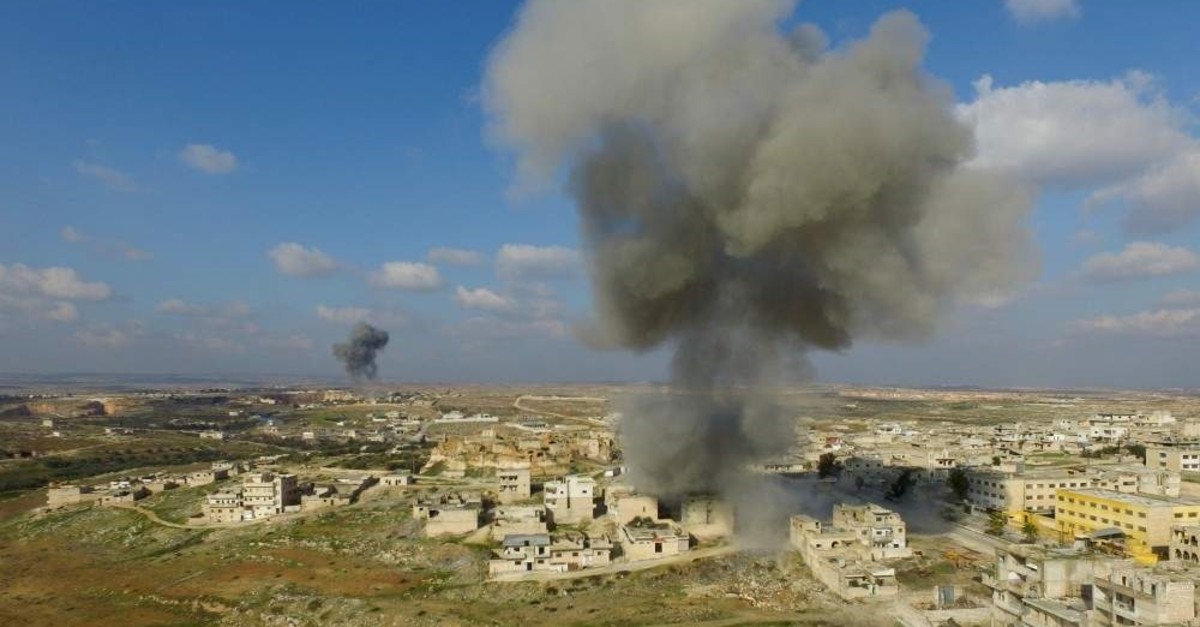 At least 17 civilians were killed and more than 40 injured in airstrikes carried out by the Bashar Assad regime in northwestern Syria's Idlib de-escalation zone, said a local civil defense agency Saturday, a day before a cease-fire is due to take hold.

The Syrian Observatory for Human Rights, a U.K.-based war monitor, however, said that 18 civilians, including six children, were killed.

In Idlib, bombs hit near a cultural center, according to the monitor group.

Turkey announced Friday that a new cease-fire in Idlib, which has been rocked by violence – although "acts of aggression" are already officially banned – is set to start just after midnight on Sunday, Jan. 12.

Turkey's Defense Ministry said Friday that attacks by air and land would halt at one minute past midnight on Jan. 12 under the cease-fire, which Ankara has been seeking for several weeks.

Bashar Assad, backed by Russia and Iran, has vowed to recapture Idlib, the last opposition-held territory in the country. The strikes came a day before a cease-fire was due to come into force.

Turkey and Russia agreed in September 2018 to turn Idlib into a de-escalation zone, where acts of aggression are expressly prohibited.

Hundreds of thousands of people in Idlib province have fled attacks in recent weeks, moving toward the Turkish border as Russian jets and Syrian regime artillery pound towns and villages in a renewed government assault launched last month against opposition forces fighting to oust Assad. During the recent regime offense, more than 300,000 people have been displaced in December alone, according to the U.N.

Syrian regime media carried no reports of airstrikes by the regime army or its ally Russia in those areas Saturday but said the Syrian regime army had "eliminated a number of terrorists during intense gunfire carried out against their positions" in the southeastern Idlib countryside.

Since then, hundreds of thousands of people have been killed and more than 10 million others displaced, according to U.N. officials. Syria's war has killed more than 380,000 people including over 115,000 civilians since it started in 2011 with the brutal repression of anti-government protests.

Meanwhile, Presidential Spokesperson İbrahim Kalın and U.S. Syria envoy James Jeffrey underlined the necessity of diplomacy to prevent the massive humanitarian crisis and migrant flow due to clashes in Idlib, during a meeting in Istanbul's Dolmabahçe Palace.

It was agreed that more support should be given to the work of the Syria Constitutional Committee by the international community and that free, fair and transparent elections should be held to ensure the success of the Syrian political process.

The two officials also stressed the importance of meeting the requirements of the agreement between Turkey and the U.S. to establish a safe zone in northern Syria for displaced people

The U.S. and Turkey on Oct. 17 agreed to temporarily halt the operation to allow the withdrawal of YPG/PKK terrorist forces from the planned safe zone, where Ankara wants to repatriate millions of Syrian refugees it is currently hosting.

Turkey has complained that despite the deal, the terrorists have remained and continue to carry out attacks.

During the meeting, Kalın expressed Turkey's concern over a recent row between the U.S. and Iran and its possible effect to trigger new clashes and radicalization in the region.