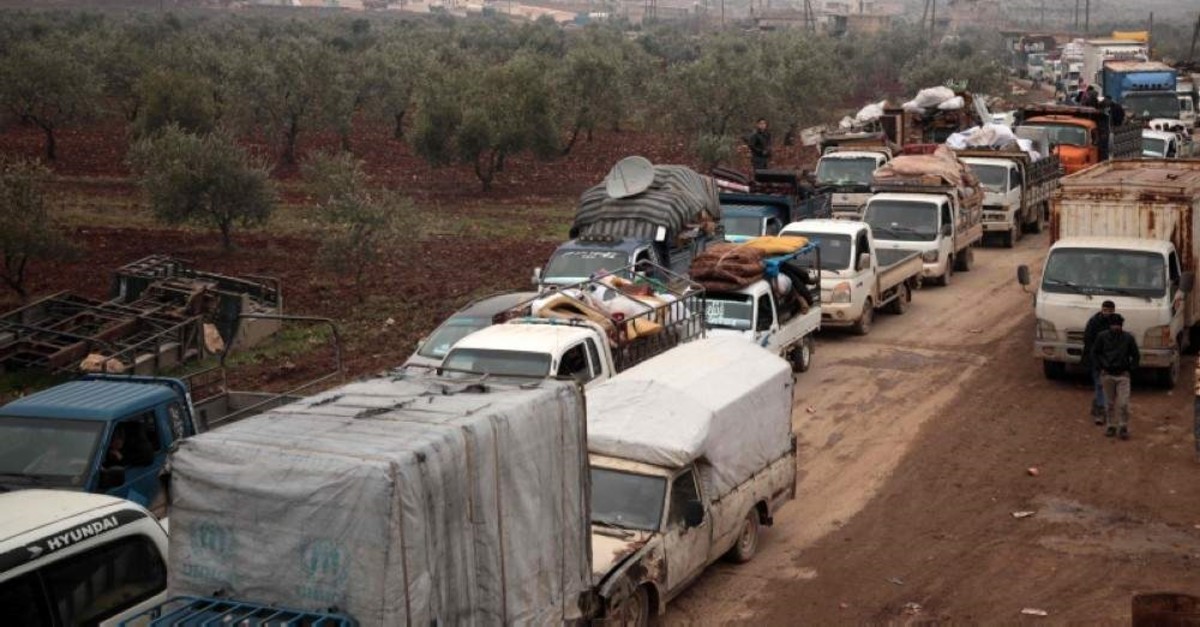 Syrians fleeing towns and villages in the countryside of the northern province of Aleppo drive through the town of Ghazaouia on January 18, 2020. (AFP Photo)
by Daily Sabah with Agencies Jan 18, 2020 9:32 pm

Russian air strikes killed five civilians in Idlib, a de-escalation zone in northwestern Syria, while regime bombardment prompted over 2,000 more families to flee Aleppo in the past 24 hours, local sources said Saturday.
According to the Syrian opposition aircraft observatory, Russian warplanes targeted overnight Darat Izzah district and three farms west of Aleppo.
The Syrian Observatory for Human Rights said three children were among those killed after midnight Friday in the village of Bala in Idlib.

"A man, his wife, and their two little girls were among those killed," said the head of the Britain-based monitoring group, Rami Abdel Rahman.

Some of the civilians reportedly waited for hours at the checkpoints and later had to return to their towns after not being allowed to leave the region.

Turkey announced on Jan. 10 that a new cease-fire in Idlib rocked by violence – though "acts of aggression" are already officially banned – is set to start just after midnight on Sunday, Jan. 12.

However, the regime and Iran-backed terrorist groups continued their ground attacks despite the fresh cease-fire.

Turkey pushed hard for a cease-fire in Idlib after the region endured months of battering by forces loyal to the Bashar al-Assad regime and its allies, sending about a million civilian refugees flocking towards the Turkish border.

Also, Turkey and Russia agreed in September 2018 to turn Idlib into a de-escalation zone in which acts of aggression are expressly prohibited.

However, more than 1,300 civilians there have been killed in attacks by the regime and Russian forces since then, as the cease-fire continued to be violated.

More than one million Syrians have moved near the Turkish border due to intense attacks over the last year.