One killed as US troops, Assad regime militia clash in Syria's Qamishli 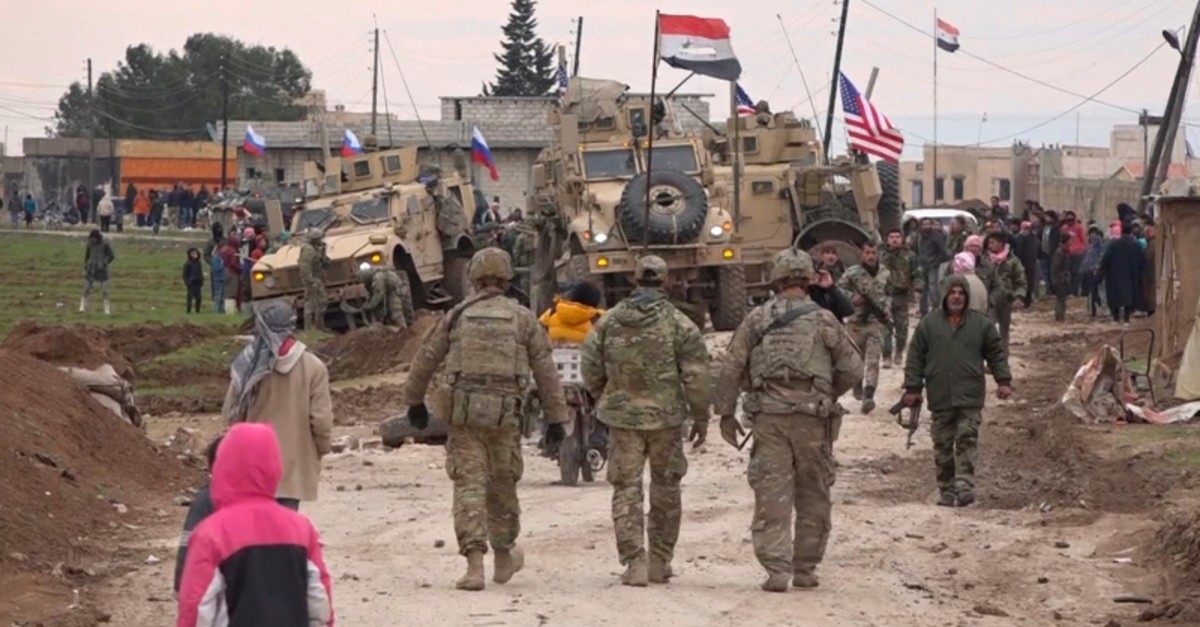 US troops and fighters loyal to the Assad regime clashed on Wednesday as situation escalated into an exchange of fire, resulting in the killing of one Assad regime soldier, a monitoring group and state media reported.

The Syrian Observatory for Human Rights said that tensions rose between both sides after locals in the regime-controlled village of Khirbet Ammo refused to allow a US patrol to pass through the area.

Pro-Assad gunmen fired shots in the air, prompting the US soldiers to throw smoke bombs to disperse the crowd and clear the way, the Britain-based watchdog added.

The regime, however, said U.S. soldiers opened fire on locals. The state SANA news agency said the locals had gathered at the army checkpoint in the village located east of the town of Qamishli, pelting the U.S. convoy with stones and taking down a U.S. flag from one vehicle. At that point, U.S. troops fired with live ammunition and smoke bombs at the residents, the report said.

It added that US warplanes were seen hovering over the area following the clash.

SANA said the incident occurred after regime troops stopped a U.S. convoy of four vehicles traveling on the road, and hundreds of people gathered at the checkpoint to prevent it from continuing on its way. The U.S. troops opened fire and after a civilian was killed and another wounded, the residents attacked the convoy and damaged four vehicles, SANA said.

State-run Al-Ikhbariya TV aired a cellphone video showing an armored vehicle flying a U.S. flag standing on a rural road while a car appeared to be blocking its way. Locals are seen walking past the U.S. armored vehicle, with at least two soldiers inside, one of whom steps down as civilians approach. One civilian is seen tearing a U.S. flag as he approaches the soldier.

The TV said protests spread, preventing reinforcements from coming to help the U.S. convoy. The report said the wounded civilian and was being treated at the Qamishli hospital.

Al-Ikhbariya and the PKK-aligned Rojava Information Center reported that U.S. aircraft flew over the village where the incident occurred, saying there were direct clashes between U.S. troops and locals in Khirbet Ammo. The state-run TV said there were reports of a U.S. casualty, adding that troops withdrew from the area.

The Syrian Observatory for Human Rights said residents and armed pro-regime militiamen in Khirbet Ammo blocked the path of a U.S. The militia fired in the air, prompting U.S. troops to fire smoke bombs. Tension escalated and U.S. troops killed one person, the Observatory said. The Observatory, which has a network of activists on the ground, said it is not clear if the killed was a civilian or a militia member.

U.S. jets flew over the area during the confrontation, amid reports that the convoy was completely encircled. After a tense standoff, the convoy was able to leave the area as jets flying overhead broke the sound barrier. The Observatory also said that a Russian convoy arrived on the scene to defuse the tension.

The U.S.-led coalition said its troops opened fire on Wednesday at a checkpoint in northeast Syria after they came under small arms fire. In a statement, the coalition said the situation was de-escalated and the patrol returned to the base. The coalition statement made no reference to any airstrike.

The reported incident marks a rare confrontation involving U.S. and Syria troops in the crowded region where Russian troops are also deployed — and is sure to further escalate tensions.

Hundreds of U.S. troops are stationed in northeastern Syria, working with their local partners from the Syrian Democratic Forces (SDF), dominated by the PKK terrorist group, to fight against Daesh terrorists. The U.S. carries out patrols in northeastern Syria, but it was not immediately clear why the convoy drove into a regime-controlled area.

The area reportedly hosts several bases of various militias backed by the Assad regime and Iran.