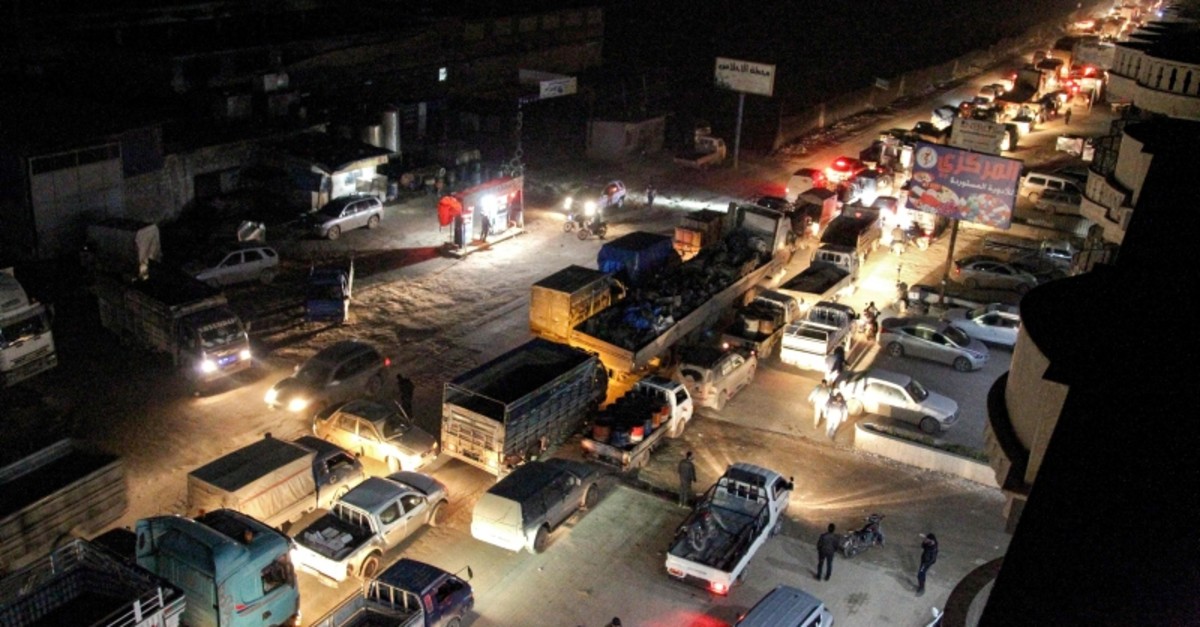 Heavy traffic flow along the road between the towns of Sarmada and Dana in the northern part of Syria's northwestern Idlib province, as people flee advancing Syrian government forces in Idlib and Aleppo provinces. (AFP Photo)
by Daily Sabah with Reuters Feb 17, 2020 1:20 am

The Assad regime forces made significant advances on Sunday in the country's northwestern Aleppo province, seizing most of the opposition-held region, regime media said, a day before a new round of talks between Turkey and Russia on the escalation in the area.

Due to this progress and the airstrikes supported by Russia, a large wave of civilians flee from western Aleppo. Large groups are flooding to the Turkish border contrary to what Russia had said before. Russia previously claimed that the civilians fleeing from the attacks would head to Damascus.

The Assad regime's recent advances in the northwestern region of the country have upset a fragile cooperation between Ankara and Moscow, which back opposing factions in the conflict but have collaborated toward a political solution to the nearly nine-year war.

Turkey, which backs the Syrian opposition, has been outraged since regime attacks in the Idlib region killed 13 Turkish troops in two weeks. It has urged Russia to stop the attacks, warning it would use military power to drive back the Syrian regime forces unless they withdraw by the end of the month.

Military sources said opposition fighters had pulled back from the area, including Anadan and the town of Haritan.

"In day one, they took an area where for eight years they could not take a single village," Rami Abdulrahman, director of the UK-based Syrian Observatory for Human Rights monitor said.

"There is very rapid advance by the (Syrian) regime in this area," Abdulrahman said. "The factions have withdrawn from most of the area," he added. The Observatory said Syrian forces had seized 13 towns and villages in the area.

The advances come after Assad's forces drove insurgents from the key M5 highway linking Aleppo to Damascus, and reopened the fastest route between Syria's two biggest cities for the first time in years, in a major strategic accomplishment for Assad.

The Turkey-backed opposition has meanwhile launched an operation in Idlib to retake areas lost to Syrian regime forces. Anadolu Agency said on Sunday that a 100-vehicle convoy of reinforcements, including troops, tanks and military vehicles and equipment, had been deployed to Idlib.

Turkey has so far sent thousands of troops and hundreds of convoys of military equipment to reinforce its observation posts in Idlib, established under a 2018 de-escalation agreement with Russia.