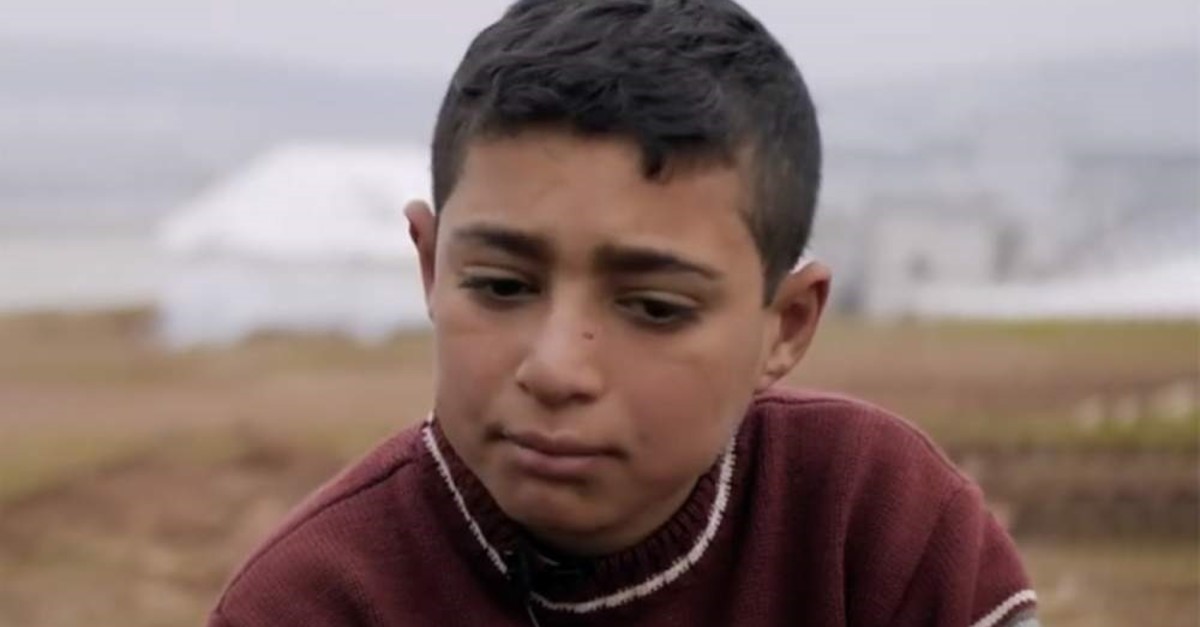 This screengrab shows the Syrian boy who was interviewed by the aid organization.
by Feb 16, 2020 2:51 pm

A Syrian refugee boy displaced from Idlib who was recorded on video by an aid organization without a jacket during harsh weather conditions went viral on social media.

After being asked where his jacket is, the smiling Syrian boy explains in the video that he doesn't have a jacket.

"My father died, and we can't afford one," he says, bursting into tears.

Turkish Interior Minister Süleyman Soylu ordered authorities to find the boy and provide support after he saw the video.

The Syrian boy is one of many refugees who are trying to survive sub-zero temperatures after being displaced due to attacks by the Russian-backed Assad regime.

- Where's your jacket?
- My father died and we can't afford one
Tears of young boy show tragedy of Syrian refugees displaced from Idlib due to Assad regime, Russian attackshttps://t.co/qx6bPgeIWG pic.twitter.com/EobZNJNjca

Idlib is on the brink of a further humanitarian catastrophe due to the Russian-backed regime's ceaseless attacks, with displaced civilians losing their lives amid the harsh winter conditions as they try to flee bombardments.

It has been months now since regime forces escalated attacks on Idlib, the last opposition stronghold in the war-torn country, targeting innocent civilians under the pretext of "fighting terrorists."

However, the regime is not alone in its attacks ongoing since April 2019. As its backer, Russia is often active on the ground, aggravating the humanitarian crisis.

According to a United Nations statement on Thursday, more than 700,000 people have been displaced in Idlib since December due to the regime attacks targeting civilians.

Save the Children, a humanitarian agency, also warned on Thursday that conditions for civilians, forced to flee their homes in Idlib, are deteriorating "at an alarming speed."

At least 290,000 children have been displaced from their homes as a result of the violence there, according to the group.

The regime and its supporters have been violating the Sochi agreement that was reached on Sept. 17, 2019, by President Recep Tayyip Erdoğan and his Russian counterpart, Vladimir Putin.