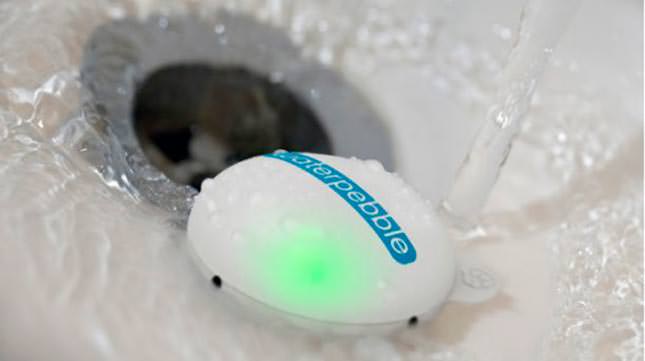 We all know the long, hot shower we all dream of after an exhausting day is not so environmentally friendly. The new Waterpebble assists you in saving both time and money by monitoring your shower's water flow and tells you when it's time to get out. You do have some control over the matter. It allows the user to program the Waterpebble to the duration of your shower.

2. Travel card, a credit card-sized battery for iPhone or Android

We all know that feeling too well, the feeling of your life draining as the battery in your phone dies. The new credit card-sized device stores enough energy to bring to life a dying smartphone.

The "travel card" back up battery can give your phone up to five hours additional talking time. Coming in at only 4.77 millimeters thick, weighing 56.7 grams and fitting most wallets, this nifty new device is certainly the talk of town.

Don't fuss with the cord of that mouse. The T630 is ultra-light, ultra-portable and super thin. The Bluetooth mouse pairs with multiple devices and with a one minute charging time that lasts an hour, the silky smooth touch surface will make navigating that much more entertaining.

Reviving the beloved Polaroid, the new Socialmatic is a funky-looking, fun-filled new gadget for those who love to capture the moment. The best part of this gadget is that its inkless printing system enables users to print stickers of their sepia-tinted images and customize them using the 4.5-inch touchscreen. Slated for release by the end of 2014, it may be hipster but it's also incredibly cool.

A journey of a thousand miles begins with a single step, and the road to fitness is made up of a thousand of these. The Withings pulse assists you in your journey. With the option of pairing this clever device to your iPhone or Android, you are able to keep track of your heart rate, measure your heartbeat per minute at the gym and measure your sleep patterns while you count sheep.

The idea behind this clever invention is to truly capture the moment from all angles. The ball-like device is thrown in the air to capture a 360 degree full spherical panoramic image with a very high resolution.

Apple has undoubtedly paved the way with its inventions and this little number is no exception. Performing the same functions as its older predecessor, the apple iPad Air is somewhat thinner, lighter, slicker and cheaper than the original. The pint-sized gadget still allows you to connect with social media, read the newspaper and surf the Internet with an improved processor and retina display.

A new version of the existing smart watch from Silicon Valley released a year ago, the Pebble's main objective is to act as an extension of your iPhone or Android device. It displays the notifications you receive on your phone on your wrist so you do not have to fish your phone out of your pocket or purse every time a new message or call is received. The Pebble smart watch is truly a smart device.

Virtual reality captured the imagination of developers, consumers and businesses for decades. With the latest Rift, Oculus created a device that may usher in an era of truly immersive gaming and entertainment, and even create new opportunities for businesses to use virtual reality in everything from manufacturing to medical environments.

It is not just your head that controls movement - lean forward or back and the virtual environment moves in sync, providing an unparalleled, fully immersive experience.