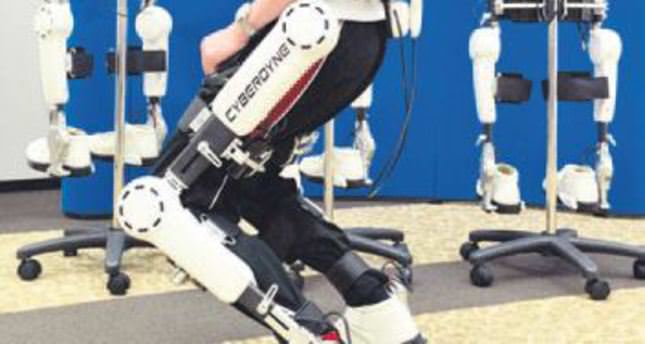 by French Press Agency - AFP Mar 26, 2014 12:00 am
TOKYO, Japan — robot suit firm listed on stock market Cyberdyne, the maker of a battery- powered exoskeleton robot suit, made its stock market debut on Tuesday, as the firm looks to raise money to boost research. The Japanese robot venture provided 10.85 million shares, which did not trade in the early session, with buy orders overwhelming sell orders. But things took off in the afternoon, with the price swinging between 7,950 yen and 10,010 yen, before settling on 9,600 yen at the close.

The offering was made at the Tokyo Stock Exchange's Mothers market, a forum aimed at providing venture companies access to funds at an early stage of their development. Cyberdyne, based in Tsukuba, northeast of Tokyo, has developed a robot suit that can help the elderly or disabled get around. Its Hybrid Assistive Limb, or HAL, is a powerassisted pair of legs.

The company has also produced a brainwave-controlled robot suit that allows wearers to don heavy radiation protection without feeling the weight, possibly offering utility to workers at the crippled Fukushima nuclear plant. A huge tsunami in March 2011 smashed into the power plant, sparking meltdowns that forced the evacuation of a huge area of northeastern Japan. The decommissioning of the crippled plant is expected to take several decades.

Cyberdyne is unrelated to the fictional firm responsible for the Terminator in the 1984 film of the same name, and HAL's naming is said to be unconnected to the sentient computer in the film "2001: A Space Odyssey." The firm was established in 2004 to disseminate the research results of Tsukuba University Professor Yoshiyuki Sankai. Industrial robots have long been used in Japan, and robo-suits are gradually making inroads into hospitals and retirement homes.