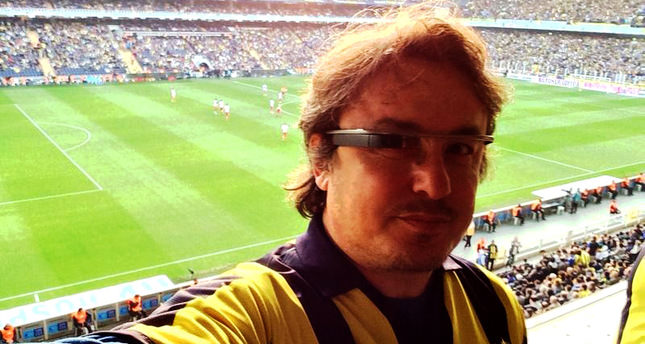 I had the chance to try out Google Glass for three weeks, using the cutting-edge technology day-to-day and even in a football match

ISTANBUL — Released to the market for the first time in 2012, Google opened up sales of its wearable glasses for one day last week.

Google Glass currently costs $1,500 (TL 3,219). We tested what the long-expected smart device is capable of in various places, such as Istiklal Street. We experienced the goal celebration during the football match between Fenerbahçe and Antalyaspor with Google Glass. We then enjoyed a boat tour on the Bosporus. In short, the secret of the Glass has been cracked.

Thousands of people competed with each other to become the first users of Google Glass, which has a wide range of features still under development. U.S.- based users can try existing Google applications, such as Google Now or Google Maps. Further, the device has the ability to take photos and recordings along with video chats, calendar or sending emails.

At first glance, Google Glass features seem rather limited. However, the device thanks to Glassware, there are many apps and services designed especially for this product. One can use the smart gadget via a voice command or a touchpad. Google Glass can record high-quality videos and take high-quality photos. Users may transfer photos or recordings to their computers. It connects to the Internet via Bluetooth or Wi-Fi.

Google Glass opens new menus and executes your commands. To activate the device, you have to raise your head up about 30 degrees.

When the menu "Ok Glass" appears on screen, it means it is ready to use. We even Turkified it with the phrase "okey glass" during our tour. You can give voice commands in English to capture a photo or record a video. If you have an Internet connection, you can search on Google, chat with your friends via Google+ or send email and SMS.

To stop recording, tap the touchpad and swipe to select "Stop Recording." If you record for a long time, however, the device may get warm. Additionally, if you make a telephone call or video chat without earphones, you may feel a slight pain on your side.

Setting up may be troublesome

Setting up takes a long time since Google Glass is designed for use in the U.S. You first need a Google+ account. In order to use the device via Android phones, download the "Myglass" app through the Play Store. You have to download the Android application package file (APK) on your smart phone. If you use the Glass with your iPhone, you must download the Myglass app from the U.S-based AppStore.

You can communicate with the Internet if you turn on the sharing option. However, this will consume your phone's charge.

Although Google Glass is considered a revolutionary device, many people see potential privacy risks. Thus, users should be careful. We may come across some users who are beaten as previously witnessed in the U.S.

Next step is smart lenses

Strangely enough, Google Glass was shrunken even before it was introduced to public. It is reported that Google patented a smart contact lens coming with its own camera, Bluetooth and sensors.

The camera works with the blink of an eye. Blink-controlled smart lenses can be connected to your phone via Bluetooth to bring processed images directly to your eyes. They also provide specific-blinking patterns.
Last Update: Apr 24, 2014 1:21 am
RELATED TOPICS