The evolution of the bicycle 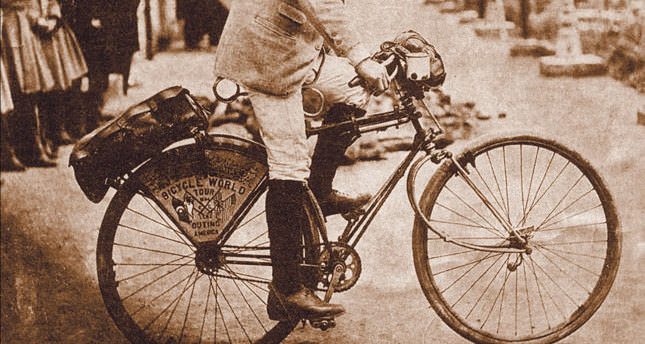 The Draisienne or hobby horse
Dating back to the 19th century, the bicycle gained its name in France in 1817 when Baron von Drais invented what was referred to as the "walking machine." The vehicle was designed to have two similar sized wheels, one at the front that is steerable and one at the back. The device was propelled manually. The cyclist had to actually push their feet back and forth on the ground and glide while walking. The machine was named after its inventor and called the "Draisienne" or hobby horse. The hobby was short lived due to its impracticality.

The Velocipede or 'boneshaker':
This bicycle made its next appearance in 1865 as the velocipede. Pedals were applied directly to the front wheel making it better known as the "bone shaker" due to the turbulence it caused on the cobblestone road.
The bicycle was still made of wood but eventually gained metal tires. It was at this stage that indoor riding rinks were invented to make the experience more enjoyable.

High-wheel bicycle:
The wooden bike evolved to the metal bike in 1870. The pedal was still attached to the enormously large front wheel, with no freewheeling mechanics. This model of the bike was a smoother ride than its predecessors. The front wheel became larger with each model because it was realized that the larger the wheel the further the distance travelled. It was at this point that the device gained the title "bicycle."
The luxurious i t e m which priced at least a six-months wage was most popular amongst young men with means. Though the bicycle was quite popular, it was also rather dangerous. Any sort of obstruction on the road such as a pebble, a dog or a rut in the road might cause the bike to fall forward and the rider to tumble off head first.

High-wheel tricycle:
While heads and necks of men were at risk with the "high wheel," the ladies with their long skirts and corsets elegantly spun around in the tricycle. The tricycle offered a safer and sturdier ride that became quite popular amongst doctors and clergymen.

The high-wheel safety:
Improvements to the design began to be seen, many with the small wheel in the front to eliminate the problem of tipping-forward. One model was promoted by its manufacturer by being ridden down the front steps of the capitol building in Washington, DC. These designs became known as high-wheel safety bicycles. Since the older high-wheel designs had been known simply as bicycles, they were now referred to as "ordinary bicycles" in comparison with the new-fangled designs, and then simply as "ordinaries."

The hard-tired safety:
As metallurgy advanced so did the bicycle.
The availability of metal that was strong and light enough to be manipulated into a reasonable shape and light enough to be powered by a human being meant the bicycle also evolved. The next design was a lot similar to the current bicycle design with two same sized wheels, pedal and handlebars. It maintained its hard tires but didn't have the shock absorbing spokes that makes riding so smooth. This absence of shock absorbers made this bike more uncomfortable than its previous designs.

The pneumatic-tired safety:
It was in 1898 that an Irish veterinarian named Dunlop that applied the first pneumatic tire to the bicycle. His intention was to make the ride smoother and more comfortable for his son. The bicycle was so popular in the 1880s and 1890s that cyclists formed the League of American Wheelman (still in existence and now called the League of American Bicyclists).

The current scene:
The now commonly known bicycle may have kept its latest form but there is no denying that your choice for a bike is as confusing as your option of speed, color or even reason may leave you scratching your head and wishing for the first model, or maybe not.