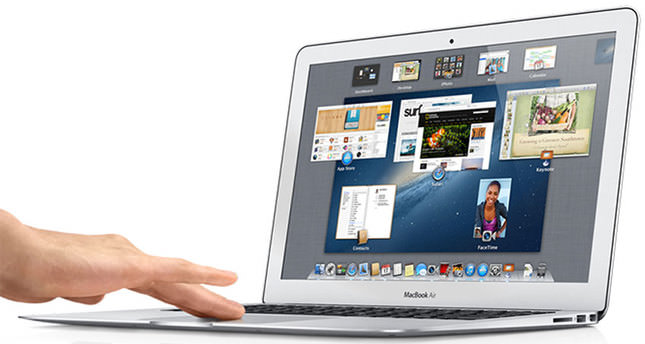 by Anadolu Agency Apr 30, 2014 12:00 am
CALIFORNIA, U.S.— Apple on Tuesday released a trio of SMC updates, one each for the MacBook Pro, MacBook Pro Retina and MacBook Air, that patches a minor issue some users have experienced when draining the battery down to near zero.

Compared to previous versions, the $899 updated MacBook Air from Apple is less expensive, slightly faster, with a slightly longer battery.

Phililp Schiller, senior vice president for marketing, said in a statement that, "with the MacBook Air starting at $899, there's no reason to settle for anything less than a Mac."

Avi Greengart, an analyst with industry research firm Current Analysis, described the updated models as "less expensive, slightly faster, with a slightly longer battery." With those specs, he asked, "What's not to like?"

But, he noted, if the laptop market overall is taken into consideration, "$899 is still a premium price point." The difference, he said, is that "Apple is providing a lot of value" for the money.

Greengart added that while it's "nice to see they're doing this price point, it's not because of a new strategy, but because they can."

Rumors of the Next Mac

Many Apple-watchers are expecting the company to come out in June with major upgrades for the Airs, including possibly the new Intel Broadwell CPUs and the high-resolution Retina display.

There are also rumors of a 12-inch, fanless model, which could be the thinnest and lightest laptop yet from the company. Other reports suggest the possibilities of a solar-powered laptop, Thunderbolt 2 high-speed connectors, or a buttonless pressure-sensitive touchpad.

The new models may be targeted for release around the time of the annual Apple Worldwide Developers Conference on June 2.
Greengart also pointed out that Apple "has carved out a large niche of people who are willing to pay more for what are arguably better PCs." Running against the trend of declining computer sales, Apple sold 4.1 million Macs in the second quarter of 2014, an increase of 200,000 units compared to the same quarter last year. Research firm IDC has reported that the company's computer sales were up 5 percent in the first quarter, while PCs in general were down 4 percent.