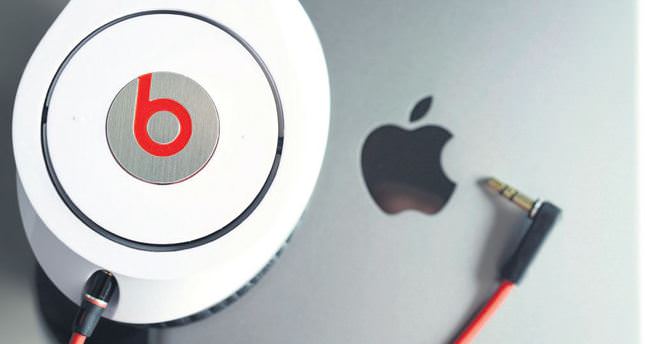 Apple is eyeing a $3.2 billion buyout of Beats Electronics, a California firm founded by rapper Dr. Dre that makes headphones and other products, in what would be Apple's biggest acquisition yet

SAN FRANCISCO — Tech giant Apple is orchestrating a $3.2 billion (TL 6.64 billion) acquisition of Beats Electronics, the headphone maker and music streaming distributor founded by hip-hop star Dr. Dre and record producer Jimmy Iovine, according to a published report. Citing people familiar with the negotiations, The Financial Times says Apple could announce the deal as early as next week. In its report posted online late Thursday, the newspaper warned the talks could still collapse if the two sides can't agree on some final details. The potential acquisition would add Beats Electronics' popular line of headphones and music streaming service to an Apple lineup that already includes digital music players and the iTunes store, the world's top music retailer. If the deal is completed, it would be by far the largest purchase in Apple Inc.'s 38-year history. The Cupertino company has traditionally seen little need to buy technology from other companies, reflecting Apple's confidence in its ability to turn its own ideas into revolutionary products such as the Mac computer, the iPod, the iPhone and the iPad. But Apple hasn't released a breakthrough product since its former CEO and chief visionary, Steve Jobs, died in October 2011.

The innovative void has increased the pressure on Jobs' hand-picked successor, Tim Cook, to prove he is capable of sustaining the success and growth that turned Apple into the world's most valuable company and a beloved brand. Cook has shown a willingness to spend more of Apple's money than Job ever did. Among other things, Cook began paying Apple stockholders a quarterly dividend and has progressively committed more money to buying back the company's shares. Apple's pursuit of Beats Electronics is the latest indication that the company is having trouble generating growth on its own. Apple already sells Beats Electronics gear in its stores, giving the company insights into how much the trendy headphones and other audio equipment appeal to its customers.

The negotiations also are taking place as the music market increasingly tilts toward streaming and away from the downloads that once drove the success of Apple's digital music store, iTunes. U.S. revenue from downloads which iTunes dominates dropped 1 percent to $2.8 billion in 2013, while streaming music revenue from the likes of Pandora and Spotify soared 39 percent to $1.4 billion, according to the Recording ındustry Association of America.

While downloads still command 40 percent of the market, streaming revenue now accounts for 20 percent of total revenue, up from just 3 percent in 2007. Beats Electronics LLC was founded in Santa Monica, California in 2008 by Dr. Dre and Jimmy ıovine. Its headphones were manufactured by Monster Cable until the two companies parted ways in 2012. The headphones have become a bit of status symbol worn by celebrities as well as audiophiles. In 2012, Beats bought streaming music service MOG, which it transformed and relaunched as Beats Music earlier this year.

The launch was fueled by a landmark partnership with AT&T that allowed up to five family members to pay $15 a month for the service as long as they were AT&T wireless customers. The deal broke the industry mold of charging each person $10 per month.