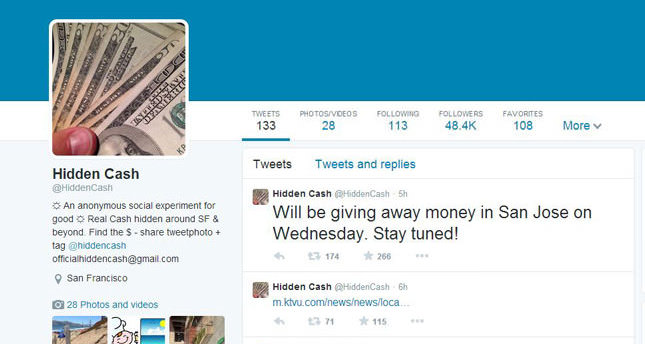 by Associated Press Jun 01, 2014 12:00 am
SAN FRANCISCO — Someone is dropping envelopes full of cash across San Francisco and causing an international frenzy on social media.

An anonymous man with the Twitter handle @HiddenCash has been hiding money throughout the city since Friday, leading scores on a scavenger hunt. His Twitter following exploded from a few hundred Friday to more than 80,000 and counting by midday Tuesday.

One of his clues Tuesday told San Francisco followers to "find Mr. Franklin along the 'crookedest street,' (towards the bottom)."

Translation: There was a $100 bill at the bottom of Lombard Street, the popular touristy thoroughfare that's best known as the "Crookedest Street in The World."

Hidden Cash's anonymous creator said his giveaways are a "social experiment for good." He claims to make his money off San Francisco's hot and lucrative real estate market and hopes that winners also "pay it forward."

Two of his winners said Tuesday that they did just that.

Sergio Loza, 28, of San Francisco, said he saw a clue on Twitter Sunday morning with the message "Early bird gets the worm." He raced out and found an envelope with $50 inside taped to a parking meter in the city's Mission District.

Loza said he spent $30 on clothes for his 2-year-old niece's birthday and gave her the remaining $20 as well.

"I didn't spend it on myself," said Loza, a security guard. "It feels good to give, especially in these times."

Adam Wenger, 27, said he won $200 by finding two envelopes about two hours apart Friday in the city's South of Market District. One envelope read, "With Love, from @HiddenCash. Leave $20 somewhere and pay it forward."

Wenger, a web producer for KGO-Radio, bought pizza for his co-workers on Tuesday and plans to pay a $100 parking ticket. "It's crazy," he said.

@HiddenCash said on Twitter that he plans to leave envelopes in San Jose on Wednesday, Los Angeles this weekend and maybe New York City next month. Followers have requested similar gestures in Alabama, Washington, and as far away as Pakistan with various hashtags ranging from #kindness, #generous, #epic and #strange.

Loza said he sent @HiddenCash "a big shoutout" on Twitter thanking him for the money.

"It's a positive thing. I hope he keeps it up," Loza said. "While you probably can't help the whole world, a few at a time is definitely good."