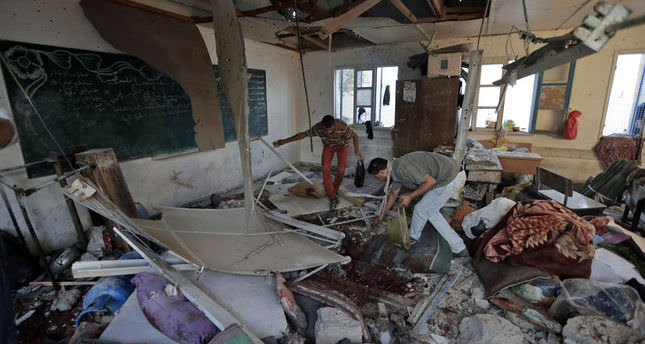 by AA Jul 31, 2014 12:00 am
A group of Palestinian politicians and academics in the Gaza Strip accused the administration of online social networking service Facebook of deliberately suspending their accounts to silence the Palestinian account of events amid Israel's ongoing offensive in the Gaza Strip.

"What the Facebook administration is doing by removing pages belonging to Palestinians without prior notice is hostile and strange," Adnan Abu Amer, a professor in Gaza's Ummah University, told Anadolu Agency on Thursday.

Abu Amer said Facebook closed his page twice within the past week. "The only explanation for these acts is a willingness to help Israel impose its version of events by barring Palestinians' accounts," Adnan said.

"Nothing I ever wrote on my page could be considered instigative," Abu Adnan said. "I post analytical commentary on the ongoing events, which does not violate Facebook's rules in any way," he asserted.

A day earlier, Moussa Abu Marzouq, a leading member of Hamas movement in Gaza, said on a newly set-up Facebook page that his previous account, which has over 20,000 followers, has also been abruptly suspended by Facebook.

"I am angered at this strange policy of barring and removing Facebook accounts which violates the right to freedom of expression," Abu Marzouq said.

Other Hamas members and activists in the embattled Gaza Strip have recently voiced similar complaints.

"Palestinian pages on Facebook have helped expose Israel's crimes in Gaza by merely posting facts and footage which demonstrate the monstrosity of Israeli attacks on civilians," Abu Amer said.

Social media, including Facebook, has become a battleground of accounts between Israel and Palestinians in the Gaza Strip, political analyst Nazeer Magali argued.

"Israel wants its version of events to be the only one reaching the outside world," Magali said. "The Israeli lobby is pressuring media outlets in the U.S. to adopt Israel's viewpoint and disregard the Palestinian one," he asserted.

"Facebook pages run by Palestinians from the Gaza Strip are under attack because they were able to draw solidarity with Gaza's plight from people all over the world by exposing Israel's brutality against women and children," Magali continued.

Israel has launched a wide-scale offensive in the Gaza Strip since July 7, with the stated aim of ending rocket fire from Gaza.

Over 1370 Palestinians-mostly civilians-have been killed and over 7000 injured thus far, according to Palestinian health officials.

Israel, for its part, has confirmed the death of 56 soldiers - most of which declared dead amid ground battles with Palestinian fighters - and three civilians.