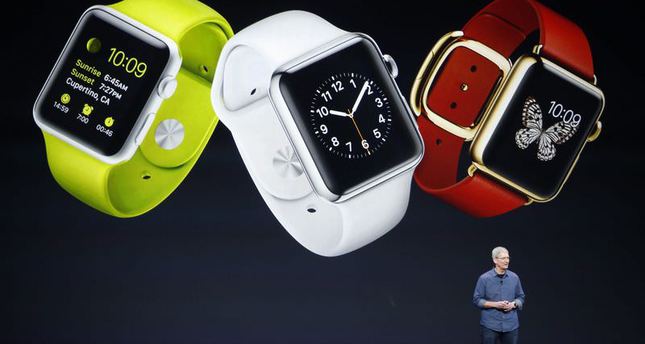 by Anadolu Agency Sep 12, 2014 12:00 am
Apple moved to recapture its role as a tech trend-setter on Tuesday with its first smartwatch and two large-screen versions of the iPhone. The iPhone 6 and iPhone 6 Plus have larger displays than previous models, at 12 centimetres and 14 centimetres, respectively, and are thinner than previous models with the iPhone 6 being 6.9 mm in depth and the iPhone 6 Plus only 7.1 mm. Both phones are powered by speedy Apple-designed A8 chips.The bigger iPhones will start selling in Turkey on Sept. 26 with prices starting at TL 2,349 ($1,067).

The company's first completely new product in four years and its first wearable device, the "Apple Watch," will be priced from $349 when it debuts next year. The gadget, which must be paired with an iPhone, is shaped like a traditional timepiece, with a small square display. A dial on the side, reminiscent of the winding mechanism on a mechanical watch, can be spun or pushed to manipulate what is on the touch screen. Apple will offer three different versions: sport, standard, and a luxury edition, with finishes including stainless steel and gold plated. The display can be customized to show the time in numbers or a facsimile of a watch with hands. Wrist bands range from leather and stainless steel to sports models in hues from pink to blue. The watch recognizes voice commands and carries sensors that can track activity such as steps and heart rate.