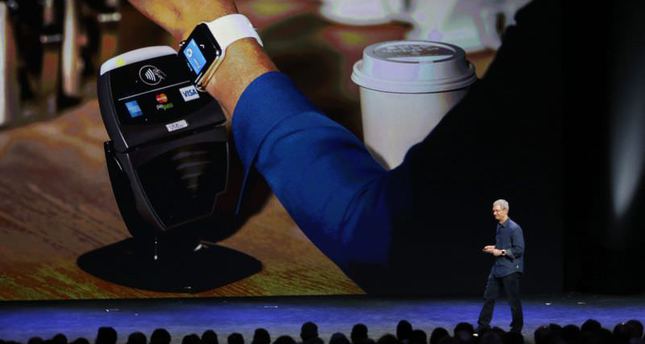 by Associated Press Sep 12, 2014 12:00 am
Apple is betting that people want to pay with a tap of the phone rather than a swipe of the card. The technology company on Tuesday introduced a new digital wallet service called Apple Pay that is integrated with its Passbook credentialstorage app and its fingerprint ID security system.
The announcement came as Apple introduced several new products including a new, larger iPhone 6 and a watch. Apple Pay is designed to let iPhone 6 owners use their smartphones to pay for purchases at brick-and-mortar stores as well as online via apps.

The company says it's easier and more secure than using a credit or debit card. And it puts Apple in direct competition with services like PayPal and Google Wallet. So-called mobile proximity payments are expected to grow exponentially over the next few years. Citi investment Research analyst Mark May said they could grow from $1 billion in 2013 to $58.4 billion by 2017. Still, consumers will have to weigh the convenience of not pulling out a card with the possible danger of storing important financial information on their phones, particularly as retailers like Target and Home Depot report data breaches, and hackers crack celebrities' iCloud accounts. In stores, the system uses a technology called near-field communication, which allows mobile phones to communicate with other devices at close range. Many Android phones already have a near-field communication antenna, but iPhones have not until now. Users will pay by holding a phone close to a contactless reader with their finger on the touch ID fingerprint system.
I
t's also set to work with the Apple Watch when that debuts in 2015. "Apple Pay will forever change the way we pay for things," said Apple CEO Tim Cook. Apple addressed security concerns Tuesday, saying Apple Pay is even safer than using a plastic card. Eddy Cue, Apple's senior vice president of internet software and services, said credit card information will be stored on the phone via a secure chip and payments will use a one-time security code. The Find My iPhone service can erase the data if the phone gets lost or stolen canceling a card will not be necessary.

The service will be able to store Visa, MasterCard and American Express credit card information. "A cashier doesn't see your name, credit card number or security code," when you pay with Apple Pay, Cue said. He also said Apple won't track people's financial data. "Apple doesn't know what you bought, where you bought it or how much you paid," he said. "That transaction is between you, your merchant and your bank."