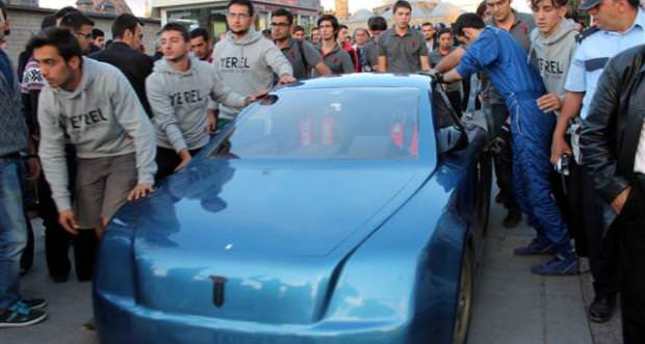 by AA Sep 23, 2014 12:00 am
Promising 500 kilometers on just a four-hour charge, the 'T-1,' designed and produced by staff and pupils at Istanbul University arrives in the eastern city of Erzurum during a nationwide tour. A Turkish-made electric car capable of traveling 500 kilometers after being charged four hours only, went on display in the eastern city of Erzurum today as part of a nationwide tour. Developed by teachers and students from Istanbul University, the "T-1" was driven through the city's main thoroughfare in front of curious onlookers.

Tuba Güven, a Master's degree student at the Department of Electrical and Electronic Engineering at Istanbul University, said that they produced a 100 percent domestic electric car when they participated in a competition run by Turkey's scientific and technological center, TÜBİTAK. She said: "Electric cars from 30 universities participated in the competition. We became the champions and started our Turkey tour."

The project was the product of 25 people with production lasting 18 months and costing TL 450,000 ($202,000). The T-1 team has been working on electric cars since 2009. One of their earlier projects came eighth in a global electric car competition held in Australia. This T-1 electric car started its tour on Sept. 15, going from Istanbul to Ankara using only one battery for the 436-kilometer trip. Güven said that the cost of traveling the distance between Istanbul and Ankara cost TL 7. She said: "We want to know whether the car is convenient for any road in Turkey. That is why we went to Samsun and Trabzon after Ankara. We will keep testing T-1 in every region of the country." Another team member, undergraduate student Serdar Zurnacı, said the T-1 crew drove the car in rainy conditions also with no problems. T-1 weights 500 kilograms and can reach maximum of 120 kilometers per hour. It is a four-seater car and has enough space for luggage.
Last Update: Sep 23, 2014 8:45 am
RELATED TOPICS