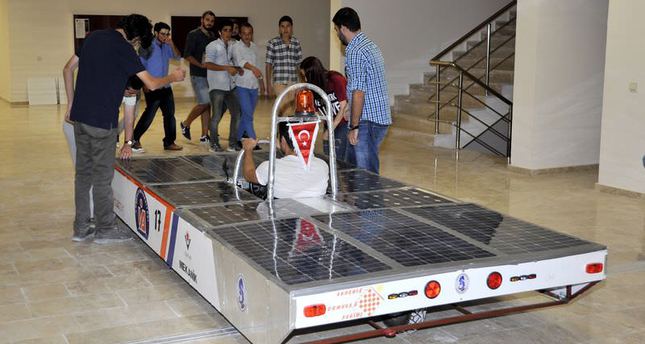 A team of students from Akdeniz University has been working on the Portacar, which runs on solar energy, since 2011 continuing to upgrade the quality of parts to better the function of the automobile

Built by the Department of Mechanical Engineering of Akdeniz University in 2011, the solar-powered automobile "Portacar" has not been put on display or raced at events outside Antalya for two years. Working in the ground floor corridors of the faculty of engineering, students are trying to work in a sunless environment.

Speaking to an Anadolu Agency (AA) reporter, project advisor Assistant Professor Hakan Ersoy of Akdeniz University said every year they enhance the Portacar to make it more functional. The solar panels on the automobile are able to recharge its batteries within an hour, and the Portacar can be driven for an hour with fully charged batteries. The automobile has 800 watts of panel power and can reach 60 KPH. Ersoy stated that they are working to improve the speed of the car. However, he claimed that the Portacar was built with cheap parts, as they do not have a sponsor. Most of the automobile's parts are taken from junk metals, electric bicycles or motorcycle materials. The Portacar was named after the symbol of Antalya, the orange (portakal in Turkish), and the steering system was also built from an orange juice-squeezing machine. Lithium polymer or lithium-ion batteries should be used in solar-powered automobiles to store more energy. "These solar panels should be more efficient in order to build an assertive automobile, yet the Portacar's panels have low efficiency," said Ersoy, adding that their automobile will make a name for itself internationally once they build a higher-powered engine.

The Portacar was built for TÜBİTAK's (Scientific and Technological Research Council of Turkey) Formula G races. The automobile raced in İzmir in 2011 and on the İzmit Gulf Track in 2012. However, the Portacar cannot participate in races outside Antalya, where Akdeniz University is located, since the project does not have enough of a budget or a sponsor. Ersoy noted that it is not possible for them to improve the automobile without support from a sponsor, although the university financially supports the project. As there is no special area assigned for the car and those responsible for the project have limited resources, the Portacar was carried inside by students and has not been taken outside for two years. Test and training drives of the automobile have been conducted in the corridors of the university ever since. Ersoy said that they have to have a budget in order to build this kind of car, but the good thing is their students are doing it by themselves, as they are not financially supported. "Since the students are building the Portacar, they learn every single detail about it. They also use the information we teach in the lessons while building the car," Ersoy noted. Although the Portacar cannot attend shows and events outside the city, it draws a great deal of attention when it does within the borders of Antalya. Ersoy said, "The Portacar aroused as much interest during the AUTO Show Fair that took place in Antalya the previous year as the luxury cars that were in the exhibition hall. Many universities in Turkey attend international fairs and events to exhibit their projects, but we are not able to do this as we have economic problems."

However, Ersoy is not troubled because of these problems. "We have to invent things," he said and continued: "If we had everything, we would buy all the parts from the shops. For example, the steering system of our automobile was made from an orange juice-squeezing machine." He added that the Portacar has a reverse gear, although most solar-powered cars do not. "We turned impossibilities into opportunities," he stated.

He pointed out that Antalya is famous for its sunshine and said that they cannot accept being in second or third place when it comes to projects concerning solar energy. "Because Antalya is a city that is blessed with solar energy," Ersoy noted.

He further said that TÜBİTAK is considering holding Formula G solar-powered automobile race in Antalya. He concluded by saying: "Antalya is the closest province to the sun in Turkey. We think it is suitable to hold this event in our city."