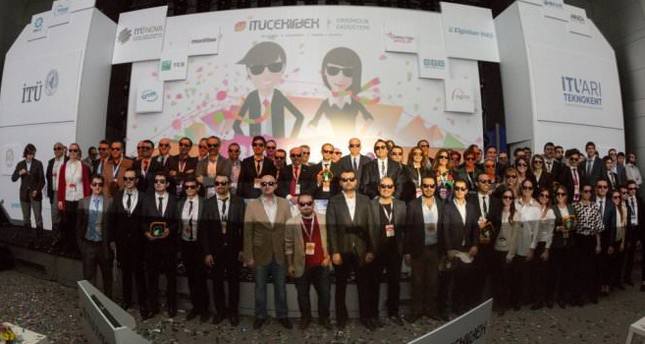 by Zeynel Yaman Dec 02, 2014 12:00 am
Organized by Turkey's one of the most important entrepreneur support project, Istanbul Technical University (İTÜ) Çekirdek, the entrepreneurship competition hosted 13 finalists staging their live presentations based on the Big Bang technology at the Süleyman Demirel Cultural Center at İTÜ's Maslak Campus. The "Educational game platforms which can integrate video games into real toys" project by Tabtoy Studios Team was chosen for first place by the jury and public voters, winning the grand prize of TL 100,000 TL ($45,000). Second and the third prizes worth TL 50,000 were handed out to Kuax Team with their project "Smart window that is able to sense the customer" and Elif Güngör with "Natural food preservative production from an egg shell" respectively.

Nine of the contestants who were able to re-create the Big Bang through effective presentations were granted different prizes and given new opportunities to help them "establish their own technology companies."

Onur Yıldırım and Rahim Öner of Tabtoy Studios Team said they wanted to prevent children between ages 3 and 8 from playing with mobile devices as this caused alienation from real toys. The winning duo achieved to turn toys into smart devices through sensors which are capable of detecting the type, location and directions of the toys with a tablet connection.

During the award ceremony, General Manager of İTÜ ARI Technopolis Kenan Çolpan handed out the keys to fully furnished offices in İTÜ Technopolis to the winners. In his speech, Çolpan highlighted that İTÜ Technopolis is a dynamic "ecosystem" which always aims high with its 160 technology companies and 5,200 employees in the research and development department.