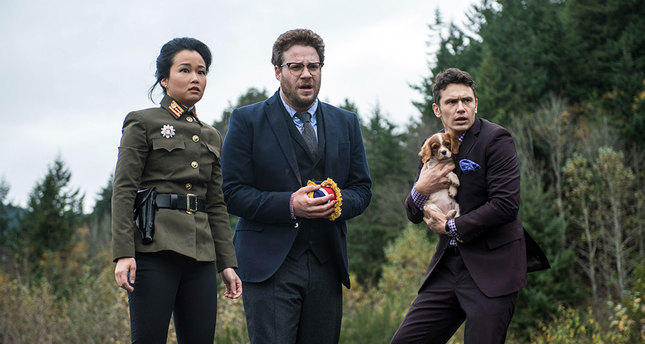 The U.S. has dismissed a call by North Korea for a joint investigation into the hacking of Sony Pictures and wants China to help block cyber-attacks from Pyongyang

Washington blames North Korea for a breach of cyber security at Sony that led to the release of embarrassing emails and prompted executives to halt the release of "The Interview." The movie, which was due to open on Christmas day, is a madcap romp about a CIA plot to kill leader Kim Jong-un that has infuriated the secretive state. Pyongyang has repeatedly denied that it was behind last month's attack, which also led to the leaking of scripts, and called Saturday for a joint probe with the U.S. But U.S. National Security Council spokesman Mark Stroh said: "If the North Korean government wants to help, they can admit their culpability and compensate Sony for the damages this attack caused." A senior U.S. administration official told Agence France-Presse that Washington had asked Beijing, Pyongyang's closest ally, to help block further cyber-attacks.

The official said that during discussions on Internet security both the U.S. and China had "expressed the view that conducting destructive attacks in cyberspace is outside the norms of appropriate cyber behavior." Sony has defended its decision to cancel the release of "The Interview" after anonymous hackers invoked the 9/11 attacks in threatening cinemas screening the film. Theaters then said they would not show it.

The threat followed the Nov.24 hacking claimed by a group calling itself the Guardians of Peace (GOP), which led to the release of employee salaries, data and health records.

It said analysis of the software tools that were used revealed links to other malware known to have been developed by "North Korean actors." The FBI also cited "significant overlap" between the attack and other "malicious cyber-activity" with direct links to Pyongyang, including an attack on South Korean banks carried out by North Korea. On Friday President Barack Obama said: "We can confirm that North Korea engaged in this attack. ... We will respond. We will respond proportionately and we'll respond in a place and time and manner that we choose." A foreign ministry spokesman in Pyongyang denied the accusation on Saturday. "As the United States is spreading groundless allegations and slandering us, we propose a joint investigation with it into this incident," the spokesman was quoted as saying by the official Korean Central News Agency (KCNA).

The spokesman also threatened "grave consequences" if the U.S. continued to discuss retaliation against North Korea on this matter. "But in case we have to retaliate, we would not carry out terrorist attacks on innocent viewers at movie theatres but stage frontal attacks on those who are responsible for the hostile activities against the DPRK [Democratic People's Republic of Korea] and their headquarters," he said. Chinese state newspaper the Global Times has also criticized the movie, describing it as "senseless cultural arrogance" in an editorial. The president also said that while he was sympathetic to Sony's plight, the movie giant had "made a mistake" in cancelling the release. Free speech advocates and foreign policy hawks have slammed Sony's decision as cowardice in the face of a hidden enemy. But Sony vigorously defended the move, saying it still hoped to release the film on a different platform - perhaps on demand or even online for free.