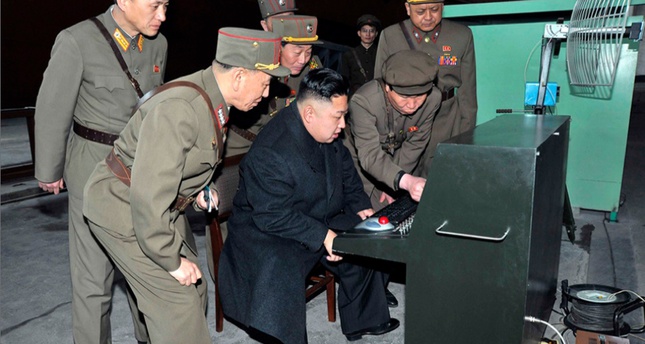 The pariah state’s Internet went dark for several hours on Monday, prompting widespread speculation of an attack after U.S. President Obama promised a ‘proportional response’ to the recent hacking of Sony Pictures

North Korea experienced sweeping Internet outages for hours before coming back online late Monday. One computer expert said the country's online access was "totally down." The White House and the State Department declined to say whether the U.S. government was responsible. President Barack Obama said Friday the U.S. government expected to respond to the hacking of Sony Pictures Entertainment Inc., which he described as an expensive act of "cyber vandalism" that he blamed on North Korea. Obama did not say how the U.S. might respond, and it was not immediately clear if the Internet connectivity problems represented the retribution. The U.S. government regards its offensive cyber operations as highly classified. "We aren't going to discuss, you know, publicly operational details about the possible response options or comment on those kind of reports in anyway except to say that as we implement our responses, some will be seen, some may not be seen," State Department spokeswoman Marie Harf said. North Korea has forcefully denied it was responsible for hacking into Sony. But the country has for months condemned the "The Interview," a Sony satirical comedy about a plot to assassinate the North Korean leader. Sony canceled plans to release the movie after a group of hackers made terroristic threats against theaters that planned to show it.

North Korea is one of the least connected countries in the world. Few North Koreans have access to computers, and even those who do are typically able to connect only to a domestic intranet. Though North Korea is equipped for broadband Internet, only a small, approved segment of the population has any access to the World Wide Web. More than a million people, however, are now using mobile phones in North Korea. The network covers most major cities but users cannot call outside the country or receive calls from outside.

North Korean diplomat Kim Song, asked Monday about the Internet attack, told The Associated Press: "I have no information." Ivan Simonovic, the U.N. assistant secretary-general for human rights, told reporters he didn't want to speculate about the nature of the Internet outages but said he hoped it would be "thoroughly investigated."

Doug Madory, the director of Internet analysis at Dyn Research, an Internet performance company, said Monday the problems began over the weekend and grew progressively worse to the point that "North Korea's totally down." South Korean officials said yesterday in Seoul that Internet access to the North's official Korean Central News Agency and the Rodong Sinmun newspaper were working normally again. Another Internet technology service, Arbor Networks, which protects companies against hacker attacks, said its monitoring detected denial-of-service attacks aimed at North Korea's infrastructure starting Saturday and persisting Monday. Such attacks transmit so much spurious data traffic to Internet equipment that it becomes overwhelmed, until the attacks stop or the spurious traffic can be filtered and discarded to allow normal connections to resume. Given North Korea's limited connectivity and lack of Internet sophistication, it would be relatively simple for a band of hacktivists to shut down online access, and it should not be assumed that the U.S. government had any part, said Dan Holden, director of security research at Arbor Networks. "Anyone of us that was upset because we couldn't watch the movie, you could do that. Their Internet is just not that sophisticated," Holden said.

Madory said one benign explanation for the problem might be that a router suffered a software glitch, though a cyber-attack involving North Korea's Internet service was also a possibility. Routing instabilities are not uncommon, but instead of getting better, as one might expect, "it's getting worse, getting progressively degraded," Madory said. "This doesn't fit that profile," of an ordinary routing problem, he said. "This shows something getting progressively worse over time." Meanwhile, reports that China was involved in cutting off North Korea's Internet are "irresponsible", China's Foreign Ministry said yesterday. Ministry spokeswoman Hua Chunying made the remarks at a daily news briefing. China called on the United States and North Korea to talk to each other about the hacking attack on Sony Pictures, she said.