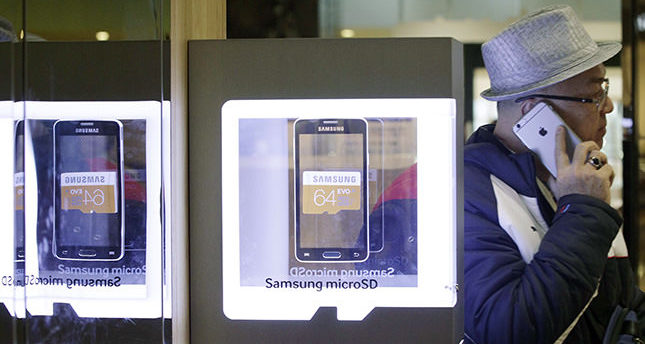 The South Korean company announced on Thursday that its October-December profit had sunk, with the improvement in its semiconductor business insufficient to mask its mobile problems.

It was in China, the world's largest market for smartphones, where Samsung's dramatic decline was most evident. Its weakness there is a key reason why Samsung's share of global smartphone sales dropped to about one quarter last year from a one-third share in 2013.

Samsung is struggling in countries such as China because "they're sort of being eaten from the bottom up by regional players" including Huawei and Xiaomi, said Ben Bajaran, an analyst at Silicon Valley research firm Creative Strategies.

"And now with Apple being competitive in larger phones, you're seeing Samsung losing any edge they had at the high end," he said.

In the second quarter last year, Xiaomi overtook Samsung to become the biggest selling smartphone maker in China. Samsung now ranks third in that market, after Apple raced to the top in the fourth quarter, according to research company Canalys.

Thanks to its bigger iPhones, Apple sold a record 74.5 million iPhones last quarter, which along with high prices helped make it the world's most profitable company.

According to Strategy Analytics, Apple tied Samsung in global smartphone sales, the first time Samsung has not had a big lead since late 2011. The research firm said Apple's new iPhones were "wildly popular" in China as well as the United States and Europe. Counterpoint, another market research firm, put Apple narrowly ahead of Samsung.

Samsung, in contrast, reported its fourth straight drop in quarterly earnings. Profits sank 27 percent to 5.3 trillion won ($4.9 billion). Strategy Analytics estimated that Samsung shipped 74.5 million smartphones in the quarter, down from nearly 90 million in the previous year's quarter. Samsung has not given a precise figure but estimated it sold between 72.2 million and 75.1 million smartphones.

Until September, Apple lacked one thing that Samsung and other phone-makers had: a supersized smartphone screen. Apple's older iPhone 5 had a screen that measured 4 inches diagonally, while screens of 5 inches or larger have been the standard in Asia for more than a year. The new iPhone 6 measures 4.7 inches and the 6 Plus is 5.5 inches. And that's made a huge difference.

Meanwhile, Samsung's flagship Galaxy S5 smartphone was criticized for a cheap looking design. Samsung replaced parts of the design with metallic features in subsequent models after the criticism.

Strategy Analytics, a market research firm, said Samsung and Apple had each shipped 74.5 million smartphones in the final quarter.

Samsung's fourth quarter profit was a moderate improvement from the previous quarter's 4.2 trillion won and higher than analysts' forecasts of 4.4 trillion won, according to financial data provider FactSet.

Sales fell 11 percent from a year earlier to 52.7 trillion won while operating profits slumped 36 percent to 5.3 trillion won, in line with Samsung's preview earlier this month.

The company's fourth-quarter net income beat forecasts mainly thanks to the solid performance of its component businesses, such as memory chips and display panels. The semiconductor division was a key cash cow generating about half of Samsung's quarterly operating income.

Samsung didn't give clear guidance of how its mobile business would perform during the current quarter. Instead, to appease investors the company announced a 40 percent increase in its annual dividends for 2014. Its share price fell 1.3 percent in Seoul.

Repeating its previous statements, the company said it will try to differentiate its smartphones with new materials and designs and will reduce the number of smartphone models to streamline its business.

Samsung has introduced the Galaxy Note Edge, the big-size smartphone with a curved side display, but it remained a niche product. Output of curved screens remains limited until a new production line goes into operation later this year.

The company is expected to unveil an update to its flagship Galaxy S smartphone in the spring.
Last Update: Jan 29, 2015 12:48 pm
RELATED TOPICS