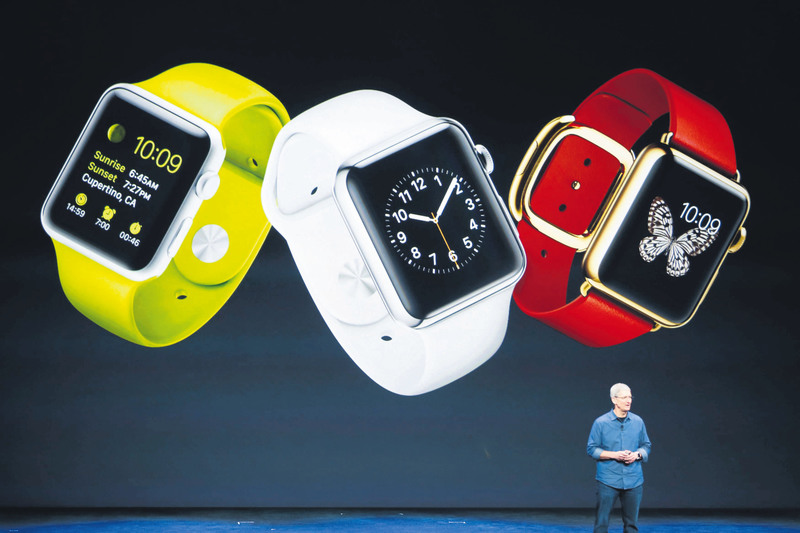 The electronics giant is set to raise the curtain Monday on the Apple Watch, a wearable gizmo the company has billed as its next big thing. The event is expected to finally fill in the blanks about the smartwatch

No one can argue that many Apple devices have changed the way people live their lives. The company's iTunes, iPhone and iPad have shaken up music, phone and computer markets worldwide. Is the Apple Watch going to be able to do the same?

The stakes are big for Apple CEO Tim Cook: the watch is the first brand-new Apple product to be launched without legendary co-founder Steve Jobs. But the market is awash in smartwatches that have gained little traction. Here are three reasons the Apple Watch will finally move the needle in the smartwatch industry and three reasons it might not.

WHY IT WILL CHANGE THE GAME:

Along with email, texts and phone calls, Apple says its watch will present news, health readings and other notifications in creative ways that can be read at a glance. It will have a heart rate monitor and accelerometer, and an internal motor that can signal the wearer with a subtle "tap" on the wrist. And Siri and Apple Pay will be built in. Apple is working with outside companies to create more apps; Cook has talked about using the watch as an electronic "key" for hotel doors or even cars.

A powerful brand: The world's biggest tech company has a reputation for quality and a direct conduit to customers it operates more than 400 retail stores around the world. And it has deep pockets to spend on advertising it is showcasing the watch this month with a sleek, 12-page insert in Vogue and other fashion magazines.

Apple's track record: This wouldn't be the first Apple product that revolutionized a market where rivals had struggled to break through. Other companies made digital music players before the iPod, smartphones before the iPhone and even tablets before the iPad. Most of those products failed to catch on until Apple made devices so appealing they set new standards and created new demand, said Forrester Research analyst J.P. Gownder.

Most smartwatches including Apple's only work with a smartphone nearby, so you can't swap one expensive gadget for the other. "What we've seen is that it's not obvious why people would want a smartwatch," says Gownder. A recent Forrester survey found some respondents didn't see a reason to buy one because they already owned a less-expensive fitness band or a full-featured smartphone (although it also found Apple fans ready to buy the new watch).

Consumers not excited: You can already buy smartwatches made by giant tech companies like Samsung, Sony or LG, or from a tech startup like Pebble, that track your heart rate, show you email and deliver other online services to your wrist. None of them have really caught on. Only about 5 million smartwatches were sold worldwide last year, according to market researchers at Strategy Analytics. By comparison, Apple sold 74.6 million iPhones in just the last quarter.

Price and obscolescence: Many of today's smartwatches sell for $200 or less. Apple plans to sell three models, starting at $349, but Piper Jaffray's Gene Munster predicts the average buyer will pay $550 for a watch and extra, interchangeable bands. Apple's high-fashion "Edition" model, made with 18-karat gold, is expected to cost thousands. While affluent consumers might pay that for a watch they can wear for years, or even hand down to their children, it's a lot of money for something that could become outdated if Apple releases a new model every year or so as it does with smartphones.

Cook will make his case for the Apple Watch at a press event Monday, where he's expected to show off more features and apps. Expectations are high. But even the iPhone didn't become a mainstream blockbuster in its first year, notes Creative Strategies analyst Ben Bajarin. Of the Apple Watch, he says, "people need to understand more about what this product is, and what it does, and I think that will evolve over time."
Last Update: Mar 09, 2015 2:02 pm
RELATED TOPICS