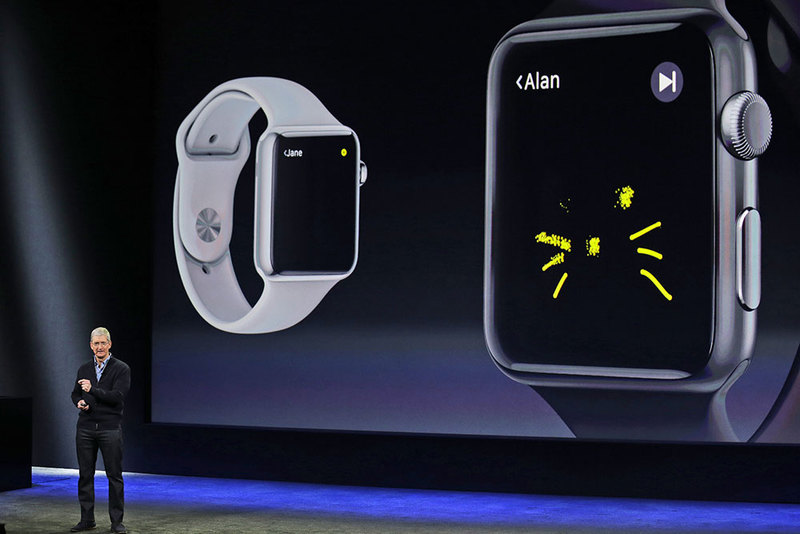 by Associated Press Mar 09, 2015 12:00 am
Make calls, read email, control music, manage Instagram photos, keep up with your workout, pay for groceries, open your hotel room door. CEO Tim Cook says you can do it all from your wrist with Apple Watch for 18 hours a day. That's how long the battery will last.

Pre-orders start April 10 and the devices will range from $349 to as much as $10,000 for a luxury edition. Industry watchers are eager to see if Apple's version will be the tipping point for the sluggish smartwatch market. There was similar skepticism when Apple released the iPad in 2010, yet the company has successfully sold millions and its popularity has shaken up the PC market.

The stakes are high for a company that just dislodged AT&T as one of the 30 stocks comprising the venerable Dow Jones industrial average. The watch is the first brand-new device Apple has launched without Steve Jobs.

Cook is directing Apple's big event Monday in San Francisco, unveiling a shiny, skinny and silent MacBook weighing in at just two pounds that the company says is the world's most energy-efficient laptop. Apple also has unveiled a new deal between Apple TV and HBO, touted growth in iPhone sales and Apple Pay adoption, and announced a set of tools called ResearchKit to help hospitals and research centers develop apps for patients.

It cut the price of Apple TV by $30 to $69 and is partnering with HBO to offer its stand-alone streaming service, HBO Go, on Apple devices in time for the "Game of Thrones" premiere April 12. It will cost $14.99 monthly. Cook said 2,500 banks are now signed up with Apple Pay, which is available in 700,000 retail locations nationwide.

Below is a live blog of the event. All times PDT.

Pre-orders will begin April 10. That's also when people will be to check them out in retail stores.

The watch will start selling on April 24 in the U.S., Australia, Canada, China, France, Germany, Hong Kong, Japan and the United Kingdom.

How much will these cost?

The entry-level aluminum model, called Sport, will be aimed at fitness enthusiasts. It will cost $349 for the smaller, 38-millimeter model

and $399 for the larger, 42-millimeter model. There will be choices of colors and bands.

The stainless steel edition will start at $549 and go up to $1,049 for the smaller model, depending on the selection of watch band. The

The Apple Watch Edition the luxury model with 18-karat gold will be available in limited quantities at select retail stores, for a

BATTERY LIFE: Apple says the watch will have 18 hours of battery life across a range of activity which Cook describes as "all day."

That's so if you factor in charging it while you sleep, but you wouldn't be able to use sleep-tracking apps overnight.

The watch is charged with a magnetic charger that clicks into place when it's near the back of the watch.

Apple also is releasing an update to its iOS software for iPhones on Monday that includes an Apple Watch app. You won't be able to use it yet, but you can see some of the customization options and other features to come.

More functionality: You can get reservation information for your Starwood hotel room, and unlock the room door right from the notification on the watch bypassing the front desk. Using a service from Alarm.com, you can also open your garage door remotely.

Apple says developers have been working on thousands of apps since the company released tools in November.

Technology VP Kevin Lynch demonstrates being able to pay for groceries and other items via Apple Pay integrated into the watch.

Lynch also demonstrates making and receiving calls, getting a boarding pass notification and calling Uber. Lynch presses the watch's crown to get to the home screen, chooses the Uber app and "calls" for a car.

He also shows off how to use the digital touch option to draw a flower picture for his wife as a message.

Supermodel Christy Turlington Burns appears on stage to banter with Cook. Says she will try to beat four hours in the upcoming London Marathon.

"Apple Watch is going to help me get there," she vows.

Apple tapped supermodel Christy Turlington Burns to try out the Apple Watch. Apple shows video of her running a half marathon wearing the watch.

Fitness features include reminders to start moving when you've been sitting too long. A new Workout app will offer weekly summaries and goal suggestions for the upcoming week. Cook describes it as "having a coach on your wrist."

Cook unveils what everyone's been waiting for today the watch. Begins by talking about the watch's time capabilities, including choices of finish and watch faces. And a series of features available called "glances."

The watch will notify a wearer with a "tap" when a new email has arrived, for instance. You can use the watch for phone calls the watch is connected to your iPhone using Bluetooth. "I have been wanting to this this since I was five years old. The day is finally here," Cook declares.

The starting price of the new MacBook laptop is $1,299 and comes with 256 gigabytes of storage. For $1,599, you get a faster processor and twice the storage. The MacBook will start shipping April 10.

Cook says Apple took what it learned from designing iPhones and iPads and "challenged ourselves to reinvent the notebook." Apple says the keyboard is more responsive, and the screen uses 30 percent less energy to offer the same brightness.

Apple is dropping many of the connection ports, such as USB, in favor of wireless technology. But when something needs to be connected, Apple is offering a single port that can be used for power charging, display output and accessories. It uses an emerging technology called USB-C.

Apple has been known to drop older technologies as new products come along. The MacBook Air got rid of a DVD drive long before others did, for instance.

Tim Cook unveils new MacBook, the thinnest and lightest version of its laptop in silver, space gray and gold finishes. Just 2 pounds and 24 percent skinnier than the MacBook Air. (Apple is dropping Air from the name and is calling this simply the MacBook.) Keys are bigger and backlit with LEDs; screen has 12-inch Retina display, currently available only in the higher-end, heavier MacBook Pro line. Force Touch trackpad allows for clicks, fast-forwarding, and more depending on how hard you press.

Also it's silent. No fan.

Jeff Williams, Apple's senior vice president of operations, addresses the role of Apple products in medical research. The company is creating a set of tools called ResearchKit to help hospitals and research centers develop apps for iPhone users to participate in studies. Apple says it's working with leading researchers to develop apps for studies on diabetes, asthma, Parkinson's disease, breast cancer, cardiovascular disease and other ailments. The Parkinson's app, for instance, will monitor patients as they walk 20 steps to detect the progression of the diseases, which affects motor systems.

Apple says it won't see any of the data to ensure privacy. ResearchKit, which will be open source, will be available next month. The first five apps are available today.

Cook says its Apple Pay mobile-payment service has expanded to 2,500 banks since launching in October with six credit-card issuing banks in the U.S.. The number of merchants accepting Apple Pay has tripled to nearly 700,000 across the U.S. That's still a small fraction of all the retail outlets out there.

The availability of HBO as a stand-alone service comes as more people turn to the Internet to watch television. HBO previously was available on Apple devices, but only with a cable or satellite subscription.

Cook shows a trailer from the upcoming season of "Game of Thrones."

Cook walks on stage to talk about Apple's retail stores and offer an update on Apple TV. He's joined by HBO CEO Richard Plepler to announce that Apple will be the exclusive partner of HBO's upcoming stand-alone subscription service, HBO Now.

There will be a new HBO Now channel on Apple TV. It will be possible to get it on iPhones and iPads, too. The service will cost $14.99 a month and will be available in early April in time for the season premiere of "Game of Thrones."

The event begins with a video of an Apple store in West Lake, China. Customers holding Apple products cheer as employees count down to the opening of the store in January.

Journalists, industry analysts and Apple guests fill the auditorium of the Yerba Buena Center for the Arts in San Francisco for the start of the event.