TL 1.5B support to be provided for research and development 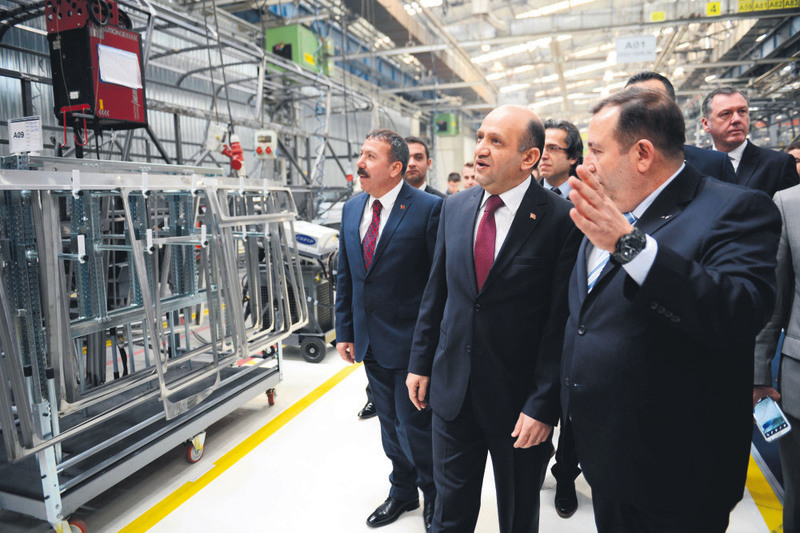 Technology Minister Iu015fu0131k attended the openning ceremony of the NEOPLAN production plant yesterday, where he was informed about the factory by MAN Turkey General Manager Yavuz.
by Daily Sabah with Wires Mar 26, 2015 12:00 am

Science, Industry and Technology Minister Fikri Işık announced that support totaling more than TL 1.5 billion ($586.31 million) will be provided to research and development activities, primarily for SMEs. Speaking at the opening ceremony of NEOPLAN's production plant, which is a part of the German-based truck and bus company MAN, Işık said that it was not a coincidence the company chose Turkey. He further noted that the main reason behind MAN choosing Turkey to produce the NEOPLAN is the highly qualified workforce in the country, which is then reflected by the quality and productivity of production. However, he also said that cheaper labor or grants for new plants, which are available in other countries, are also required to draw investment. "We will be providing more than TL 1.5 billion for R&D activities, mainly for SMEs. We would like more companies like MAN to open R&D centers and develop new products, and we are very determined to make this happen," Işık emphasized. Işık stressed that MAN has the most compact bus facilities in Turkey and is gradually increasing its investments in the country. MAN Turkey's turnover has increased 309 times within the last 15 years and its exports by 9 times within the last 10 years, which is evidence of MAN's success in Turkey. Currently, MAN Turkey produces 500 buses with 800 employees at its 317,000-square-meter facilities in Ankara and Akyurt. With the new NEOPLAN plant, the figures will increase, and the Cityliner, Jetliner and the newly designed Skyliner busses of the MAN Bus Group will be manufactured at the facilities.

"For MAN to choose Turkey for the production of the NEOPLAN indicates the trust in our country. No one who has trusted in Turkey has been wrong to do so. No one who invested in Turkey has suffered losses. On the contrary, anyone who is trying to degrade Turkey has lost. We value middle- and long-term investments more than short-term investments," Işık said. The minister underscored that since 2002, the stability and environment of trust in the country has increased Turkey's potential for the automobile industry, and Turkey has become a successful automobile exporter. While there were 357,000 automobiles manufactured in Turkey in 2002, as of 2014, the number was more than 1.2 million. Işık noted that Turkey is currently the 17th biggest automobile producer in the EU, the second-biggest producer of light and heavy commercial vehicles, seventh in automobiles and the sixth in the world in total production. Işık said that this success was mainly due to the support the government has given to the automobile sector, and with the right strategies, Turkey has become a center for the sector and R&D activities. According to Işık, between 1995 and 2014, TL 1 billion in grants - according to 2014 fixed prices - were provided to R&D activities in the automobile sector supported by TÜBİTAK TEYDEB. Moreover, the number of R&D centers in Turkey has reached 176, while the target is around 500. The chairman of the board of MAN Turkey, Münür Yavuz, said that the entire NEOPLAN production process would take place in Turkey, which is a great step for both the Turkish automobile sector and MAN Turkey. The assistant chairman of the Turkish Metal Association, Muharrem Aslıyüce, said that during the economic crisis of MAN Turkey - when production almost came to a halt - MAN Turkey chose to look out for their employees instead of dismissing them. "I kindly thank them for this fair conduct," Aslıyüce added. MAN's first facilities were established in Turkey in 1966 and were the first and the largest production facilities outside of Germany. Currently, MAN Turkey produces around 2,000 busses along with chassis and electronic parts. With the production of NEOPLAN, the current production rate will increase by 40 percent.
Last Update: Mar 26, 2015 2:17 am
RELATED TOPICS