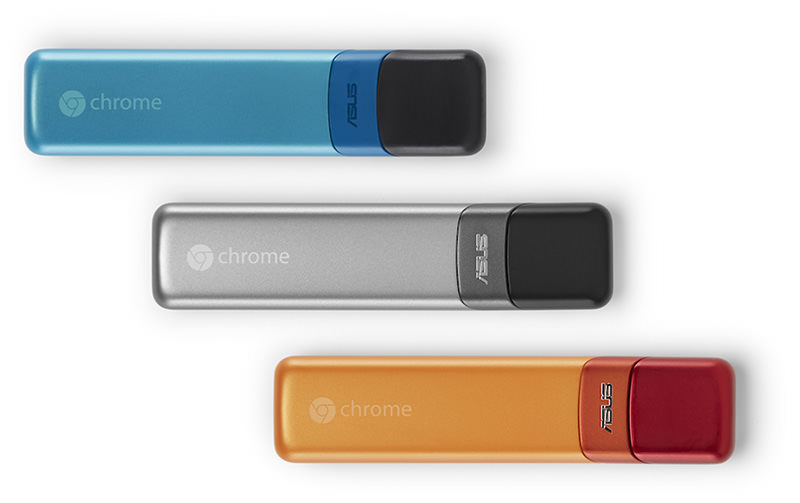 | Photo: AP
by Daily Sabah with Wires Apr 01, 2015 12:00 am
Google and Taiwan's Asus are launching a "computer on a stick" that can plug into a display to turn it into a PC, according to AFP.

Google said in a blog post that the Asus Chromebit would be arriving mid-year with a low price tag. "Smaller than a candy bar, the Chromebit is a full computer that will be available for less than $100," Google said. "By simply plugging this device into any display, you can turn it into a computer. It's the perfect upgrade for an existing desktop and will be really useful for schools and businesses."

The statement offered no other details on the device, but Google also announced its lowest-price Chromebook laptop computers at $149 in partnership with Chinese electronic groups Haier and Hisense. With a display of 11.6 inches, the Haier computer is being sold through Amazon and the Hisense PC through Walmart. Google has produced Chrome devices with other manufacturers including Acer, Lenovo, Dell and LG.

Meanwhile, Google is releasing its cheapest Chromebook laptops yet: Two versions priced at $149 aimed at undercutting Microsoft's Windows franchise and gaining ground in even more classrooms, according to AP.

Various PC manufacturers have been working with Google to design lightweight laptops running on the Chrome operating system since 2011. The newest versions are made by Hisense and Haier. Hisense's Chromebook can be ordered beginning Tuesday at Walmart.com and Haier's version can be bought at Amazon.com.

Their arrival coincides with Microsoft's rollout of a lower-priced Surface tablet in an effort to reach students and budget-conscious families. Pre-orders for that device began Tuesday, too. As the prices for tablets and smartphones have been declining, it has forced PC makers to lower their prices, said International Data Corp. analyst Jay Chou. The success of the Chromebook line is intensifying the PC pricing pressure. "It has been good news for consumers, but not so good for vendors," Chou said.

The cheaper version of the Surface Pro 3 sells for $499, compared with $799 to $1,949 for the higher-end models. The discounted version has a slightly smaller 10.8 inch screen rather than 12 inch screen, a slower processor and a less flexible kickstand with just three angles rather than any position.

The Chromebook has served a dual purpose for Google. Like the company's Android software for mobile devices, the Chrome system is set up so users will automatically begin using Google's search engine and other services, such as Gmail and YouTube. Google has used the Chromebooks as a prod to bring down the prices of all PCs, something the company wanted to do because it has more opportunities to show the digital ads that bring in most of its revenue when more people can afford to buy an Internet-connected device.
"We cannot be happier that Microsoft is helping drive down the prices of PCs," said Caesar Sengupta, Google's vice president of product management for Chromebooks. "If Microsoft is reacting to [Chromebook's low prices], that's fantastic. We love it." Unlike most computers, Chromebooks don't have a hard drive. Instead, they function as terminals dependent on an Internet connection to get most work done.

Despite those limitations, Chromebooks have been steadily gaining in popularity, particularly in schools, as more applications and services made available over Internet connection – a phenomenon known as "cloud computing" that has reduced the need for hard drives.

Aside from the $149 laptops, Google is also attacking Microsoft on other fronts. Later this spring, Google and Asus are releasing a hybrid Chromebook that can use used as either a laptop or tablet with a 10-inch screen. Called the Chromebook Flip, it will sell for $249.
Last Update: Apr 02, 2015 3:09 pm
RELATED TOPICS