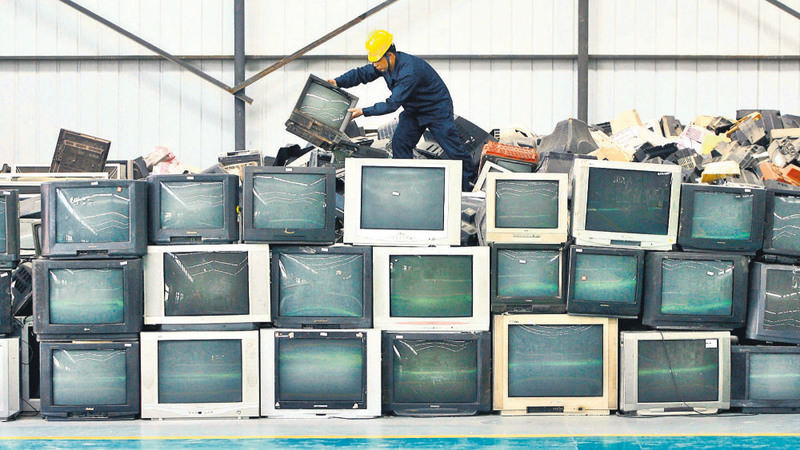 by reuters Apr 19, 2015 12:00 am
The United States and China contributed most to record mountains of electronic waste such as cellphones, hair dryers and fridges in 2014 and less than a sixth ended up recycled worldwide, a U.N. study said on Sunday. Overall, 41.8 million tons of "e-waste" -defined as any device with an electric cord or battery- were dumped around the globe in 2014 and only an estimated 6.5 million tons were taken for recycling, the United Nations University (UNU) said. "Worldwide, e-waste constitutes a valuable 'urban mine', a large potential reservoir of recyclable materials," said David Malone, the U.N. under-secretary-general and rector of UNU. The report estimated that the discarded materials, including gold, silver, iron and copper, was worth some $52 billion. The United States led e-waste dumping with 7.1 million tons in 2014, ahead of China on 6 million and followed by Japan, Germany and India, it said.

The United States, where individual states run e-waste laws, reported collection of 1 million tons for 2012 while China said it collected 1.3 million tons of equipment such as TVs, refrigerators and laptops in 2013.

Norway led per capita waste generation, with 28 kilograms (62 lbs) dumped per inhabitant, followed by Switzerland, Iceland, Denmark and Britain. On that ranking, the United States was ninth and China was not among a list of the top 40. Researchers said that in many case it made economic sense to recover metals that included 16.5 million tons of iron, 1.9 million tons of copper as well as 300 tons of gold. The gold alone was valued at $11.2 billion, with the precious metal used in devices because it is a good, non-corrosive conductor of electricity. Global volumes of e-waste were likely to rise by more than 20 percent to 50 million tons in 2018.
Last Update: Apr 19, 2015 11:21 pm
RELATED TOPICS