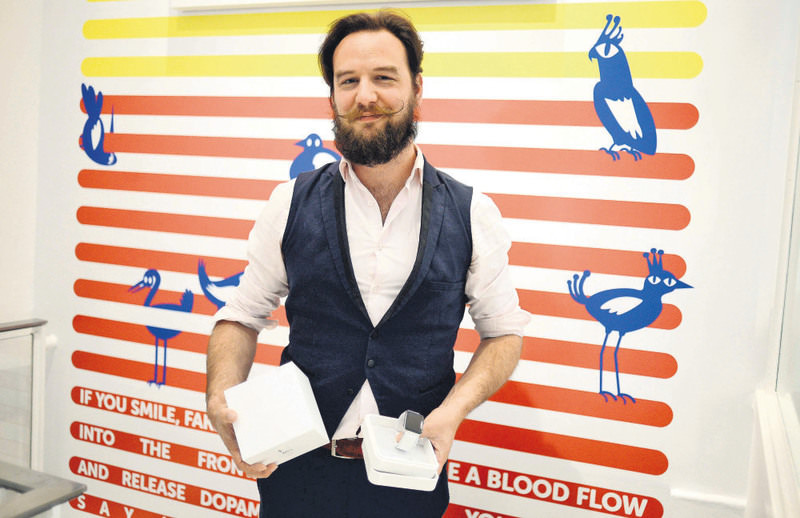 A customer holds his newly bought Apple Watch on Friday in a shop in Paris on the official launch day of the new smartwatch.
by Daily Sabah with Wires Apr 24, 2015 12:00 am

While the Apple Watch has begun shipping to its earliest adopters, frustrated Apple gadget lovers and investors are desperate to discover the components of the new smartwatch

The Apple Watch went on sale around the world on Friday, the final stage of a protracted launch of Apple Inc. Chief Executive Tim Cook's first new product, capping months of publicity and a frenetic two weeks of pre-orders. Buyers can take the smartwatch home from a handful of upscale boutiques and department stores, such as The Corner in Berlin, Maxfield in Los Angeles and Dover Street Market in Tokyo and London, which Apple courted to help position the watch as a fashion item. The company is directing people to order online, which should prevent the lines around stores that generally greet new iPhone and iPad launches. The lack of lines at Apple stores made it hard to judge popular demand for the watch, which comes in 38 variations with prices ranging from $349 for the sport version to $10,000 and more for the gold edition. Wall Street estimates of Apple Watch sales vary widely. FBR Capital Markets analyst Daniel Ives raised his sales estimate this week to 20 million watches from 17 million, based in part on online order backlogs.

It is available in nine countries - the U.S., U.K., Australia, Canada, China, France, Germany, Hong Kong and Japan. More countries will get the Apple Watch at a later date, and the preorder shipping date for Turkish customers is expected in late May.

Following the debut, Apple managed to frustrate gadget lovers and investors desperate to find out the components of its new smartwatch, encasing its chips in tough resin and using rare screws to thwart people trying to pry it apart. Gadget repair firm iFixit, which has conducted numerous "teardowns" on Apple products from iPhones to MacBooks, said the U.S. company also appeared to be promoting its brand on the watch's inner workings, complicating detailed analysis of the parts' origins.

News that a supplier has been chosen - or rejected - for one of Apple's products can cause drastic swings in stock prices, so huge are the iPhone maker's orders. The iFixit team, which travelled from San Luis Obispo, California, to Australia to get its hands on one of the first Apple Watch deliveries after the gadget's global launch on Friday, began by blasting the screen with a heat gun to pry it off. They then untangled a nest of cables to uncover the S1 - the core computing module encased in resin that even a pen knife could not shift. "We have definitely not seen this before," iFixit teardown engineer Andrew Goldberg said in Melbourne.

iFixit had anticipated that the resin module, which Apple has said is to protect the electronics from the elements, would have a lid that could be opened rather than be a solid block. Apple in the past has depended on multiple companies to supply its memory chips for storing music and photos, but imposes strict rules forbidding those suppliers from discussing Apple-related business with investors and the media. "In the past, they have identified the component parts. But now, instead of identifying all the processors and chips, they're marketing it as the S1," said Sam Lionheart, a technical writer at iFixit. "They're being a little more protective of their suppliers and taking credit for more than they're making in house, which isn't a crime, to make the technology seem a bit more innovative or revolutionary than it really is," she added.

The watch is the highest profile wearable technology that links wirelessly to phones, which has the potential to create a template for other firms that have struggled to create products consumers would want to be seen wearing. In addition to the S1, the teardown found one chip outside the resin casing, possibly linked to Wi-Fi, but without a clear logo. It also revealed that Apple has used tri-wing screws, a relatively uncommon type of screw, making it more difficult to access the electronics. Meanwhile, Samsung teased the market with hints of a new version of its Gear smartwatch on Friday, the same day that rival Apple's long-awaited wearable devices went on sale. Samsung also said it would release a wearable software development kit for third-party developers ahead of the launch.