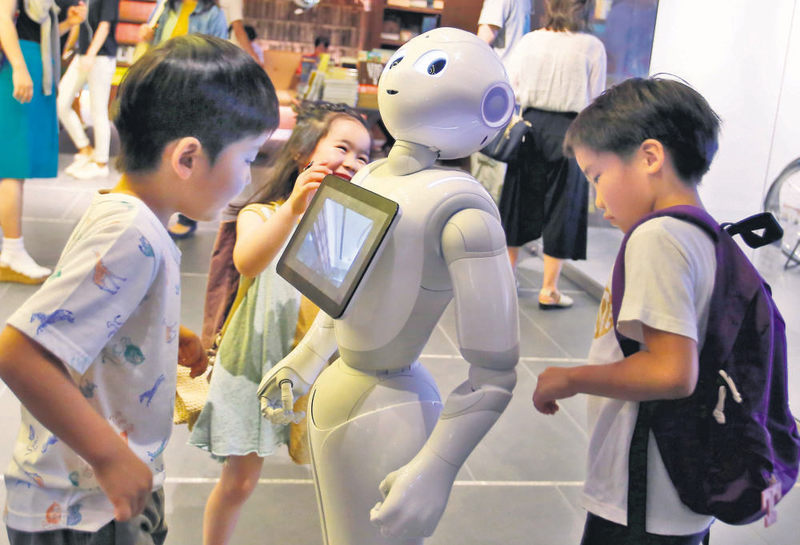 Japan is home to many cute things like mangai quirky figurines and mascot characters, but Pepper the new companion robot from a Tokyo-based technology company, delivers cuteness like never before

What's striking is the absolutely ardent attention the new companion robot, from Tokyo-based technology company Softbank Corp., gives you frankly a lot better than some real-life people. "You look a bit thin," it coos in a soft childlike voice, free of any rigid mechanical accent. "You should watch what you eat."

The 121-centimeter (four-foot) tall white machine-on-wheels was disarmingly charming and definitely intriguing when I spent half a day with it, ahead of its delivery to its first customers later this month. It's another matter entirely whether it's worth the price tag of 198,000 yen ($1,600), plus the maintenance and insurance costs that ownership entails, adding up to some 1.2 million yen ($10,000) for an estimated three-year lifespan. Only available in Japan so far, overseas sales are undecided. The programming it has now caters to Japanese tastes. A U.S. version will obviously have to be quite different. Pepper has cameras, lasers and infrared in its hairless head so it can detect human faces. Whatever direction you move, its cocked head will also move, intently looking into your face with its big eyes, like a puppy. Except this pet can talk.

As long as you don't walk too far from it, removing yourself from its attention, Pepper will prattle on and on, switching from one small talk topic to another, gesticulating at times with its five-fingered soft hands for effect. "Do you want to play a quiz game? What animal goes like this: bow wow," it might say. It will tell you "cat" is the wrong answer. And then it will ask, "What did you have for dinner?" If you say, "Tempura," it has enough voice recognition to decipher that and will reply: "Oh, Japanese." I tried answering, "Steak," another time. It said, "Oh, Western." Yes, the conversations do sometimes repeat themselves, but so does human dialogue.

The robot is equipped with enough of a repertoire to avoid easy boredom. That repertoire is constantly being updated through a WiFi connection. Each Pepper is hand-made by Foxconn in China, limiting supplies to 1,000 a month. The first batch for July sold out in a minute. It's attracting regular technology fans but also a kindergarten, a cafe and people who're buying it for their elderly parents. The kind of patient interaction Pepper excels at is recommended for people with dementia. So Pepper might come to the rescue of stressed out families.

Equipped with artificial intelligence by Aldebaran of France, Pepper has what Softbank calls an emotional engine, meaning it reacts to what it interprets as anger or sorrow in humans around it by deciphering voice tones, facial expressions and language.

It also has programming that sets off the equivalent of its own human emotions, such as getting nervous if a room suddenly goes dark, or elation when you pet its head and shower it with praise, such as: "You are the best-looking robot I have ever seen. I love you. You're the best." "I am going to cry for joy," it says, throwing its arms up in the air.

On the flat-panel display attached to its chest, it offers boxes to tap for various tasks, such as reading storybooks, giving a tarot-card reading, playing the radio, working as a drum machine and relaying the weather forecast. It has some cool dance moves as well. One is shaking its body in a rubbery way. Another is doing elegant hand gestures as it plays Tchaikovsky's "Nutcracker."

Owners may be tempted to give the thing a wig or dress it up. That's not recommended as it can overheat. It keeps going for 10 to 12 hours on a single charge. It charges from a regular household outlet. Softbank offers a basic software application kit so even a child can create applications for Pepper. Softbank has an in-house standard for violence, pornography and other abuse for its own applications. This is not some slapped together toy of a robot. It's the first convincing semblance of a step toward artificial intelligence fantasized in science fiction movies that's affordable for the regular home. It isn't for everyone. You have to have an open mind. The way it's designed, Pepper is basically about human relationships. It could be the life of a party. It could be a dream-come-true robot friend for a child.

For parents, it can keep track of a baby growing up with photos Pepper takes over the years and other data kept in cloud storage. Pepper's record could also hold special meaning, if its owner were to die. Pepper is imperfect. But so are human beings. It tried to guess how tall I was and said 163 centimeters (five foot four), 10 centimeters (four inches) taller than I am. I said I wanted to go to "Hawaii," but it misheard that as not going anywhere, perhaps because the Japanese for none, or "nai," rhymes with Hawaii.

Of course, there is no illusion it's human. But just as a movie, a video game or a good book can be fascinating, without any pretense about being real, Pepper is fun. "Let's grow and get better together," it says with bubbly emotion in a poignant conversational moment. Even when it isn't talking and standing still, it appears to be breathing, inhaling and exhaling softly. Its arms move ever so slightly. And that is preciously cute.
Last Update: Jul 13, 2015 10:40 pm
RELATED TOPICS