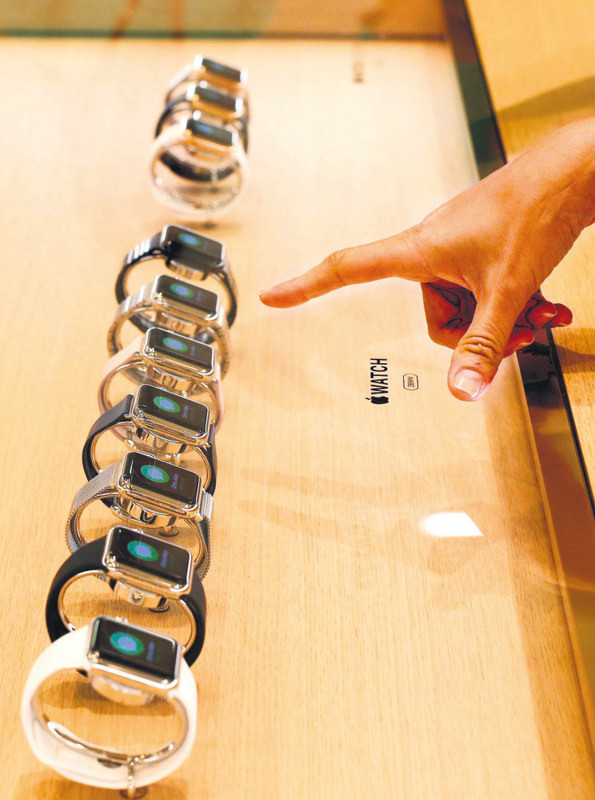 by Jul 21, 2015 12:00 am
Is the Apple Watch a dud? Nearly three months after the launch of Apple's fashionably smart wrist wear, some analysts say it's not a mainstream mega-hit. But others see promise in its popularity with Internet-savvy young people.

Media outlets last week jumped on a study by research firm Slice Intelligence that suggested that based on a large sampling of email receipts in the United States, orders for Apple Watch have plunged 90 percent since the week that the wearable computing gadget made its debut.The estimate did not factor in data about Apple Watch sales at real-world stores. It remains to be seen whether the famously tight-lipped technology company will provide insights into Apple Watch sales when it releases a quarterly earnings report today.

While not sounding an alarm, BMO Capital Markets analysts put out word to investors that they were "disappointed" and reduced their estimate for Apple Watch sales in the coming year. They reasoned that the product was "nice to have but not a necessity and is a bit hard to use."

Richard Windsor at Edison Investment Research said that even if Slice is way off the mark about the drop in Apple Watch orders, it was clear the smartwatch has sold far below even conservative expectations.

"My single biggest disappointment when the Apple Watch launched was Apple's failure to come up with a compelling use to which the device could be put," Windsor said.

"I think that this failing is the single biggest reason why the device is underperforming and why wearables in general continue to massively underperform the hype."

However, Cantor Fitzgerald experts believe Apple Watch will be a "go-to gift" during the year-end holiday season and become the best-selling new product in Apple's history. The Apple Watch was the first new product line introduced by the culture-changing company behind iPhone, iPad, iPod, and Macintosh computers since 2010.

Global Equities Research managing director Trip Chowdhry has estimated Apple could sell 20 million to 25 million of the watches in the final three months of this year.

Jack Gold, president of J. Gold Associates, a research firm, said that it would be no surprise if Apple Watch sales momentum fell after the hype of it hitting the market subsided.

"The Apple lovers are going to buy things as soon as they come out," Gold told AFP.

"The rest of the market though, the mass market, really waits for more definition around 'What can this do for me'?"

So far no smartwatch, even a fashionably sophisticated offering by Apple, has hit the market accompanied by uses so compelling that people swarm to snap them up, according to Gold.

"Why do I spend $400 for a screen on my wrist that allows me to do basically the same thing that my phone does?" he asked rhetorically.
RELATED TOPICS