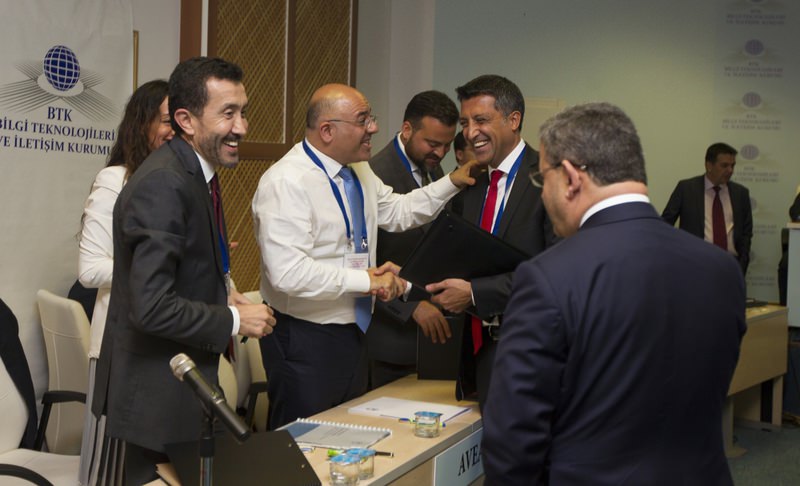 The result of the 4.G authorization tender has been greeted with optimism and excitement by the CEOs of the participant telecommunications companies as Turkey is heading toward a new era in the telecom sector

The CEOs of Turkcell, Vodafone, Avea and Turk Telekom welcomed the 4.5G technology as the companies seem to be ready to turn up the level of competitiveness.

Vodafone Turkey CEO Gökhan Öğüt said the 4.5G authorization tender is a critical turning point for Turkey and the country will enter a new period in mobile broadband on April 1 next year.

Following the 4.5G authorization tender that was held by the Information and Communication Technologies Authority (BTK), Öğüt expressed happiness for successfully completing "a just and transparent bidding process" that supported effective and sustainable competition.

Underlining that this was one of the large steps that Turkey has taken on its way to a digital transformation, Öğüt said Vodafone Turkey is looking forward to bringing its worldwide technological accumulation and experience to Turkey soon.

According to Öğüt, Vodafone Turkey renders mobile Internet service on five continents. "We strove to purchase the most ideal blocs for our customers and we will try our best to fulfill commitments," he added. The cash payment method is one of the financial models that the company plans to use in payment.

Öğüt also said that Internet usage costs per unit is rapidly falling in Turkey when compared to previous periods and explained his hope that unit prices will drop further with the rising Internet speed and use in the upcoming period.

Turkcell CEO Kaan Terzioğlu emphasized that the telecommunications sector should make long-term plans in order to make investments in an efficient way and to proceed in a sustainable way. "We will try our best to contribute to the sector's great objectives," Terzioğlu said.

"We regard this tender as only the beginning," Terzioğlu said, adding that they will continue to work to implement 4.5G and to introduce domestic 5G technology. "Our greatest objective is to be a country that does not only consume technology but also produces it," he stressed.

In reference to changes that will accompany the 4.5G technology, Terzioğlu said that almost 50 percent of cell phone users have smartphones and one-third of these phones are ready for 4G and 4.5G. The 4.5G technology means an Internet speed that is 10 times faster than current Internet speeds. In future, mobile Internet's speed will exceed that of fiber Internet used in homes.

Turkcell has prepared all kinds of financing means including its own resources and loans. A statement released by Turkcell said that the company obtained the right to use A-license by paying the highest license fee during the 3G tender that was held in 2008. The statement also said the company established one of the most powerful 3G infrastructures in the world. As a result of the International Mobile Telecommunications (IMT) authorization tender that was held on Aug. 26. Turkcell outdid all of its rivals by paying 1.6 billion euros for all frequency segments that it was entitled to use.

Türk Telekom CEO Rami Aslan said the tender held on Wednesday was a milestone for the Turkish telecommunications sector. He stressed that as Türk Telekom Group, they are very pleased with the tender results.

In addition to extending his gratitude to those who contributed to the tender's organization, Aslan said: "Today, there is a fair competition environment where everyone can compete with each other more equally. We believe the economy and the Turkish people will benefit the most from this. The real competition in the mobile market will start from now on."

Aslan underscored that they had waited and worked hard for this day to come for a long time. "We have accelerated our investments especially in the last five years and made intensive investments into Turkey's fiber optic infrastructure," Aslan said, adding that the infrastructure was designed in complete accordance with the new technologies that Turkey will use. "We are happy to be the largest shareholder operator in the 1800 and 900 MHz bands where we will receive a recompense for our investments. This frequency distribution will make us ready for 4.5G, 5G and the new technologies that will be used from now on," Aslan said.

Aslan highlighted that they would be a leading operator since they had a very powerful infrastructure network spread over 81 Turkish cities. He also said they were financially prepared for the tender.

Avea General Manager Erkan Akdemir said they were happy that the tender was concluded quickly and successfully. Underscoring that the figure reached in the tender was above expectations, Akdemir said: "I can certainly say that the real competition in the mobile market will start from now on. We will see that 4.5G technology will rapidly start to be used in Turkey as of the beginning of 2016."

The forthcoming 4.5G technology will make it possible to provide higher data speeds and lower lag time. Numerous changes will occur in different sectors such as watching video via cloud services, establishing smart home and city infrastructures, building up mobile offices, sharing large files and providing mobile health and education services. While higher data transfer capacity and lower lag time is required so that more machines can be connected with each other in a period called the "internet of things," 4.5G technology will easily cover high data traffic required to establish smart cities.

Lower lag time has critical importance for companies. The duration of the operations conducted by companies whose employees work in certain fields will be shortened and thus customer satisfaction will be increased. In short, it will be possible to carry out many operations via mobile devices in the upcoming years thanks to 4.5G technology. Additionally, the mobile device habits of people will evolve.
Last Update: Aug 29, 2015 1:22 am
RELATED TOPICS