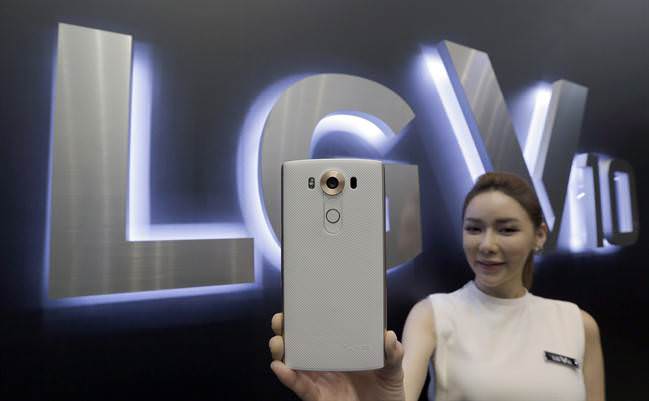 by Associated Press
Oct 02, 2015 12:00 am
South Korean smartphone maker LG Electronics Inc. unveiled a new smartphone yesterday with an additional screen and a camera that can capture a wider scene when taking a selfie, hoping to arrest a slide in its market share.

The V10 comes with another screen above the main 5.7-inch display. The small second screen can stay on to display weather, time and date when the main display is turned off. It has room for frequently-used apps and can receive notifications while using the main screen to watch a video. The V10 smartphone is LG's latest attempt to make headway in the premium mobile phone market. Its flagship G series phones were edged out by new phones from Samsung and Apple.

The company has lost its market share in the smartphone market in recent months, falling to the seventh place globally as Chinese vendors surpassed its shipments. Its second-quarter market share was 3.8 percent, down from 4.7 percent a year earlier, according to Counterpoint Technology Market Research. The new phone's front camera is equipped with a standard 80-degree lens and a 120-degree wide-angle lens option. That means a larger group can fit into a selfie shot taken with the V10. The V10 phone will go on sale in South Korea later this month for 800,000 won ($678) without a contract from a carrier, followed by the U.S. launch next month.